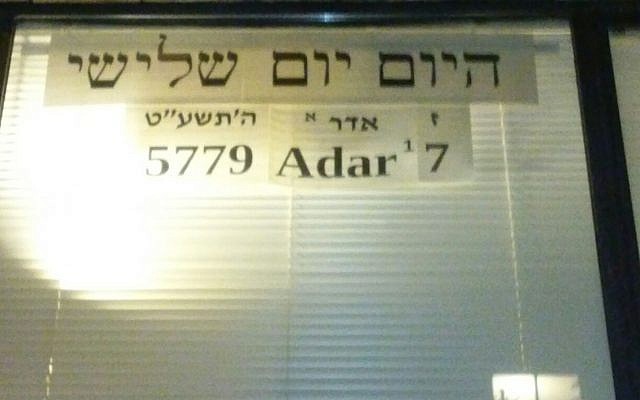 Picture of window at the King George Street in Jerusalem of tonight, the day Moses was born and died. Altruistically, the person living there shows passers by every day what date it is.

An Israeli paper came this Shabbat with remarkable scientific news. They want Internet visitors to pay for their story about altruism (you can’t make up jokes like that) so I looked for the original source. This turned out to be Scientific American from 18 months ago — so much for news.

The whole story in a nutshell: altruism could come from our bacteria. If your first reaction is “Huh?” that could be a sign not of wonderment, but of intuitive insight and clarity that this can’t be true.

Even if microbes could chemically force animals, people have free will. That means that we don’t operate on must but on want and should. I just had to steal this apple, your honor, will not persuade the courts.

One other reason that this totally theoretical and speculative research received any serious attention is probably because many people are totally in the dark about unselfishness.

Cynics will claim that altruists just give in order to feel good about themselves. So they’re just egotists in disguise.

Self-styled saints will say, give, so that you will receive. So also they highlight the profitability of giving.

And anti-anti-socials will preach, when all give, we will live in a good society. Also there, generosity is self-centered.

But there one more option: to give because that is a proper expression of who I am. And that has nothing to do with being forced or enticed. I give because that’s what my authentic self wants. Because it feels right, not because it makes me feel good.

It may take some time before biologists will be kind enough to admit this. In the first place because most of them can only see people as complicated programmable machines with volition merely as an illusion.