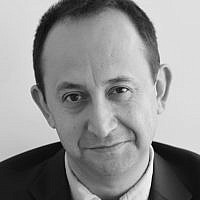 As I have mentioned on numerous occasions, I am against settlement expansions. I want to see an independent state of Palestine, next to the state of Israel, based on the Clinton Parameters.

This is one of the main reasons why I voted for Meretz in the recent elections.

In my opinion, unless we reach a peace deal with the Palestinians, Israel’s future could be endangered. I also believe in peace because I believe in human rights. I believe that the current regime of checkpoints, walls and tough security measures make the life of Palestinians in areas B and C miserable.

Such measures could be short term security solutions, but in the long run, they are more likely to create enemies for Israel and for peace. I don’t even want to imagine what it would be like to go through checkpoints everyday, manned by a foreign army asking me who I am, were I am going and coming from. Imagine going through such an experience everyday! How angry would you feel?

Add to that the security wall which in some cases has cut villages in half. The Oscar nominated documentary “5 broken cameras” (you can watch the entire movie here) vividly shows the hardships which many Palestinians go through because of the security barrier.

At the same time, I do not believe that Israel is an apartheid state.

If Israeli citizens were subjected to a different treatment as Palestinians in areas C and B of the West Bank are because of their nationality, then I would agree that Israel is an apartheid state.

If Arabs who are Israeli citizens were given discriminatory water allocations and different roads to travel on as Palestinians living in area C and B of West Bank have to, then I would say that Israel is an apartheid state.

But the fact remains that people who live the West Bank’s areas B and C are not citizens of Israel, therefore the different treatment which they are subjected to can’t be called apartheid.

And lets not forget that Israel’s own Arab and non Jewish citizens enjoy the same political and legal rights as the majority of their compatriots. Israel’s Arabs have had democracy and the freedom of speech which comes with it long before any other Arab peoples did in this region.

Nevertheless, I still believe strongly that Israel must provide the same services that it offers to its citizens to Palestinians who are living in areas B and C of the West Bank. This means water, transportation, as well as legal protection. This is the duty of every occupying power and we are not fulfilling our duty.

There will be no peace until both peoples are treated equally.

At the same time, Hamas must stop calling for the elimination of Israel and must stop teaching hate. The Palestinians Authority also has its responsibilities. As Greg Roman points out in the often heated debate below, sale of land to Jews is punishable by death by the PA. This is wrong at every level.

The debate below about the new bus line in the West Bank is a good example of the numerous discussions about this topic.