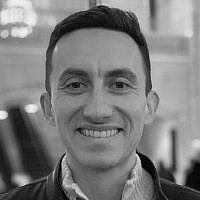 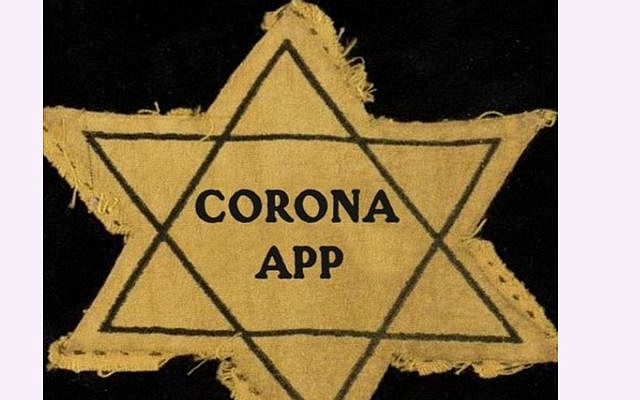 Illustrative: A reference to the yellow stars Jews were forced to wear during the Holocaust, used to protest an application for monitoring coronavirus carriers. (Arnoud van Doorn/Twitter via JTA)

People who oppose coronavirus mitigations have begun wearing yellow stars. HatWRKS, a hat store in Nashville, sold yellow stars embroidered with the words “not vaccinated.” Washington State Representative Jim Walsh wore a yellow star on his shirt at a protest event. Dave Bronson, the Mayor of Anchorage, defended constituents for wearing yellow stars to a town assembly about mask mandates. The list goes on.

These people assume that the Holocaust began with government-imposed limits on Jews’ personal freedoms, like being required to wear yellow stars while in public. From there, they infer that coronavirus mitigations will lead to catastrophe, because they limit our freedoms by requiring us to wear masks, stand six feet apart, and get vaccinated.

This argument simply doesn’t hold together. For one thing, governments are meant to limit certain freedoms, to preserve order and the common good. We’re no freer to eat bald eagles than we are to go drink-driving. No-one ever compares such rules to the Holocaust, though.

And none of the coronavirus mitigations threaten our right to exist. This is what the Nazis did when they began stripping Jews of their citizenship and their livelihoods after coming to power in 1933. The yellow star only entered the equation in 1939, and that was just in the east. Jews in Germany didn’t wear it until the fall of 1941. By then, their freedoms had already been taken, and Nazi antisemitism was rapidly escalating toward systematic mass murder. The star was meant to make Jews even more isolated than they already were, to speed up deportations, and to scare the public away from interfering. The star’s design aped similar items used to stop religious intermarriage in the Middle Ages. The Nazis often scoured history for anything that might seem like a precedent to their radical antisemitism.

So, to wear the yellow star today is certainly ill-informed. But is it antisemitic?

Jews in the Nazi Empire wore the star because it was a legal requirement. People today wear it by choice. This choice turns the star from a tool of ostracization into a symbol of protest. As a protest, it does more than compare coronavirus mitigations to the Holocaust. It criticizes people who aren’t protesting for their witless obedience.

This hybrid protest-criticism leaves Jews as figures of pity and disgust. Pity for their tragic victimhood, disgust for enabling their own destruction. To wear the yellow star is to make an unspoken statement: “I’m being treated like a Jew – but you’re behaving like one.”

This is informed less by historical reality, more by fiction like Schindler’s List or The Tattooist of Auschwitz, where Jews mainly exist as a confused, hysterical mass.

And pity and disgust aren’t the only ingredients in the cocktail. There’s a twist of resentment too. Resentment is now an ordinary part of our political life. In a healthy democracy, political opponents are respected as partners in a process of debate and compromise. Resentment has paralyzed this process. It’s ruptured points of disagreement into partisan divisions, and it’s turned compromise into a source of outrage.

Coronavirus mitigations have touched us all. Families have been separated for months or years, and we can’t travel or go out as freely as we once did. Earlier generations may have seen these things as necessary hardships to be met with dignified resolve for the community’s sake. But in an era so polluted by resentment, some people see them as personal affronts. In extreme cases, they measure this affront against the Holocaust. They don’t do this because they want to make meaningful comparisons between past and present. They just want their suffering to be recognized as the worst that’s ever been seen.

This explains anti-vaxxers’ fixation with the yellow star, which is growing into a jealous obsession. In their minds, it’s a trophy of suffering that can be snatched from Jewish hands and awarded to them instead. Sociologists call this kind of behavior “secondary antisemitism” – a hatred of Jews not despite the Holocaust, but because of it. Henryk M. Broder captured this in his famous quip, “the Germans will never forgive the Jews for Auschwitz.”

Protesting coronavirus mitigations by wearing a yellow star is selfish and petulant, and it reeks of secondary antisemitism. Like the anti-vaxx movement in general, it also smacks of the runaway narcissism that’s fueling partisanship, resentment, and racial and religious tension. The more common it becomes to wear the yellow star, the greater the need to end antisemitism by sharing knowledge.