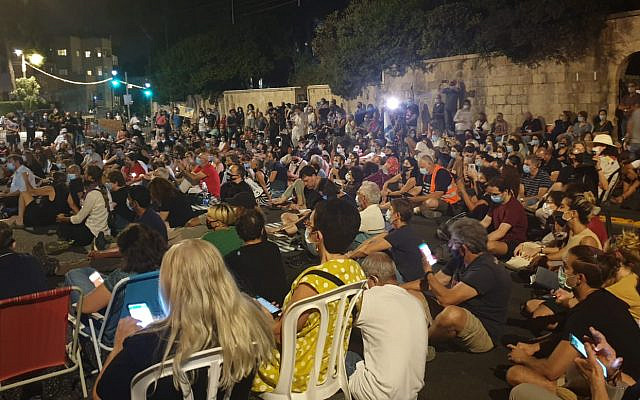 What do we need to feel comfort on Shabbat Nakhamu (Nakhamu, Nakhamu ami-Comfort, comfort my people – Isaiah 40:1 ).  At the reading of Eikha (Lamentations) of those calling for democracy in front of the Prime Minister’s residence, I looked around and didn’t recognize many of those present.  My guess is that it is a sort of khurban, a destruction of the world they knew and their assumptions about it, that has driven many who aren’t accustomed to demonstrate out of their homes and comfortable lives, and into the street.

Let me digress for a moment, or not.  Many know that every year I go on a Tisha B’Av pilgrimage to Palestinian villages in the Occupied Territories and the Negev, that have suffered khurban, or are in serious danger. At each stop we read a chapter of  Lamentations where destruction has already taken place, and a selection from the prophets demanding justice in the presence of endangered communities. This year, I had wanted again to also visit an impoverished Israeli Jewish family in danger of being evicted from their home. As a result of corona, the numbers are growing. However, the family I reached out to was in too much pain to think about a visit.

I can’t speak for everybody who joined me, but I returned from the long journey hot, tired, perhaps a bit dehydrated, and even more disturbed than usual. Even the theme of hope in the special Tisha B’Av minkha was not of much comfort.

Last year I had the feeling that we were successfully helping Palestinian shepherds to hold on to wide swaths of land for grazing and farming. This year, settlers are pushing them out of many of those same lands, and Israel is attempting to eliminate their encampments.  In the area of the Taibe junction, some 45 orders have been issued, some of them against communities that have lived in their current location for as many as 40 years, either all year or during the spring and summer months.   And, what had WE done?  What had I done? 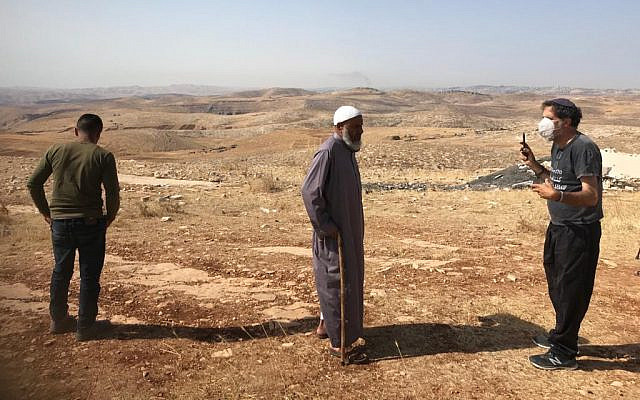 The Site of A Destroyed Bedouin Encampment Credit: Ariel Friedman

I don’t know how many of us instantly feel comfort when we hear the beautiful words of Isaiah (40: 1 – 26), and the remainder of the 7 haftarot of consolation.  The struggle for democracy and to defend our legal system has not ended, and it is clear to me that I need to work harder and more efficiently.

But, approaching Balfour, I remembered a dvar Torah of many years ago by Rabbi Rona Shapiro.  I have mentioned it before. It turns out that the seed cones of the majestic redwood trees only open when there is a fire.  A forest fire brings about terrible khurban. Animals die, the earth is scorched, and human communities can also be threatened.  I wouldn’t say that this khurban is good, any more than I accept the idea in all too many political theories that it is permissible to cause some to suffer in order to bring about a desired messianic world. Even if there are necessary forms of khurban, remember that our sages virtually excised capital punishment, even though it exists in the Torah.  The awful decision to take human life, other than in true and absolutely unavoidable self defense, should not be a matter of human agency. If there is to be khurban, it is abominable to think that we can play God, and intentionally bring it about in the name of anything. Such “good intentions” have always created Frankenstein’s monsters.  I also pray to God to choose another way. Any future good accomplished this way entails the terrible price of those trampled in the process.

But, while some may be fearing a khurban in the form of a national or worldwide disaster (I addressed this last week), the khurban that is sometimes necessary is the khurban of the way we look at the world, and the stories we tell ourselves.  We must disabuse ourselves of illusions, distance and insensitivity, blinders, lack of concern and exaggerated innocence.  For some, their world is blown apart when they discover that Israeli democracy or their financial wellbeing or future cannot be taken for granted.  I had to disabuse myself of the idea that our finger was still in the dike. The khurban of our illusions and ordered world hurts terribly, but just might lead to something positive.

Just might. That it isn’t guaranteed either. All too often, the experience of khurban of the world as we would like it to be leads to a debilitating khurban of hope.  Khurban leads to an even greater khurban. However, if having blinders torn away from our eyes and being disabused of our illusions doesn’t destroy our hope, and actually strengthens our commitment, the khurban can be the forest fire that allows new growth and progress.

Our Torah portion (V’Etkhanan) opens with Moses again recounting the bitter disappointment that he feels because he will not be allowed into the Promised Land.  But this destruction of his personal hopes and dreams strengthens his resolve to prepare us for the future we will face without him. That is what he does in the remainder of the Torah portion, and the entire book of Deuteronomy.

This is the message of donning tefilin for minkha on Tisha B’Av, and of the seven haftarot of consolation. Comfort is not justifying or even looking for the good in what has happened. It is realizing that we can and must move forward. We can look at everything as grass and flowers that fade, and we fade as well.  But God endures (Isaiah 40: 7-8), and we must be God’s partners.  The khurban of our illusions is not, and must not be the khurban of our hope or determination. It is the necessary kick in the rear end making a better world possible – when we do our part.