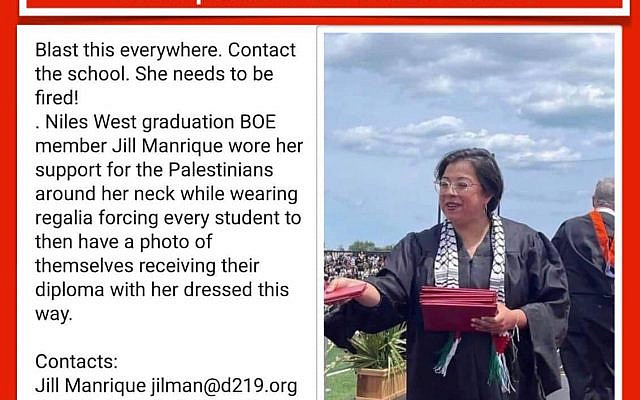 Many residence of Skokie, IL are speaking out on various social media sites regarding their outraged at the behavior of Jill Manrique, who is a member of the Board of Education (BOE) of Niles Township High School District 219.

On Sunday, May 22nd at the Niles West High School graduation, Jill Manrique broke protocol when handing out diplomas to students. Instead of wearing the traditional graduation regalia, Manrique wore a Palestinian keffiyeh around her neck.

Upon seeing the keffiyeh at the Niles West graduation, many parents stated they were reminded of the Palestinian chant “From the river to the sea”, which refers to the Palestinian (Hamas) agenda of murdering all Jews from the Jordan river to the Mediterranean sea. Many felt that Jill Manrique’s action could be seen as a call for the death of all Jews in Israel and abroad.

For many years Skokie had the largest population of both Holocaust survivors and Japanese interment camp survivors in the United States.

Several alumni of Niles West, East and North who grew up in Skokie shared, that you couldn’t grow up in our hometown without knowing several survivors of both Japanese interment camps and the holocaust. Skokie was not perfect, yet hate crimes against students was nothing like it is today.

Many older Skokie residents and Alumni stated when they heard of Jill Manrique’s actions, they found themselves flashing-back to the late 1970s — when Skokie made international news.

Back in 1977-78 the National Socialist Party of America (American Nazi Party) wanted to stage a march in Skokie. These hate filled individuals knew that they’d get a lot of attention promoting their racist/antisemitic agenda wearing Swastikas marching down the streets in a town filled with holocaust survivors and their children. The 1981 movie “Skokie”, staring Danny Kaye tells the story and history of what occurred.

On various social media sites many alumni of the Skokie high schools believed that Manrique’s goal was to instill fear in the lives of those who’s relatives were holocaust survivors. This time around instead of wearing a swastika, Manrique wore the Palestinian keffiyeh around her neck.

In more recent years, several parents of students attending school in district 219, have vocalized their concerns that various individuals (including school staff) appear to be radicalizing Skokie’s youth to be both racist and antisemitic. Many parents who’s children attend both Niles West and Niles North, believed that BOE member, Jill Manrique has been involved in this movement.

Board member Jill Manrique was on stage at the Niles West graduation handing out diplomas to graduates as a representative of school District 219. This board member chose to wear a keffiyeh with Palestinian flags at the bottom which was clearly a non-academic addition to her black robe. Students and faculty, other than Jill Manrique, followed the rules at graduation and did not display any political statement or symbol other than flags on their mortarboards.

This was not a religious item like a head scarf/hijab or yarmulke –  this was clearly a political statement and does not belong on stage at a graduation, especially from a district board member.

The district president should have asked her to remove the keffiyeh prior to her presenting diplomas on stage for every student to view as they collected their diplomas. In addition, each student was photographed with this inappropriate political statement.

Graduation, especially from a board member, is not the time and place for politicizing your views. At the least, the board of District 219 should reprimand her actions and send an apology to the students and their parents for allowing this to take place on their watch.

Jill Manrique’s actions had everything to do with promoting her own personal political agenda, and knew exactly what she was doing.Manrique knew there would be repercussions, yet it didn’t matter to her, nor cared about how many people her actions would harm.

Hate against Jews now has a different face. No longer are Jews biggest fear white supremacy. Now it’s our educators and BOE who preach hate against Israel and Jews. The indoctrination is real. Do not fall for their tricks. Do not fall for lies and misinformation. Do not shake hands with hate.

The irony, is that Manrique who publicly declared herself “as a member of the LGBTQ community, and as a converted Jew — would most likely be stoned to death on the streets of Gaza.”

The Niles West Graduation was not the time or place for politics and or hate. The graduation ceremony was a time for the celebration for high school students to be honored for their completion of their education.

Jill Manrique is not Palestinian — according to Manrique’s tweets on Twitter, she claims that she was raised Catholic, and is Mexican.

Jill Manrique knew what she was doing when she wore the Palestinian Keffiyeh at the Niles West graduation ceremony. She wanted to show her solidarity for Palestine, especially since this past year there was so much animosity towards the Israeli Club existing at West. She knew it would be in every child’s photo she had contact with. My issue is with Jill Manrique, is not only with her intent to make a political statement, but also to make waves in Skokie’s Jewish community.

Politics have no room at a graduation ceremony or in schools.

Manrique actions were against the guidelines provided by the school. None of the other board members wore anything besides their robes and scarves that represented their graduating schools. It appears that Jill Manrique felt that school guidelines did not apply to her. As a board member she should know better and do better!

The demographics of the Skokie public school system has changed dramatically over the years. Skokie still has a large Jewish population, yet the vast majority of Jewish parents are no longer are choosing to send their children to public schools — instead families are homeschooling or enrolling their children in private Jewish Day schools.

Years ago Skokie’s public schools would close for Jewish holidays do to the large percentage of students taking days off. This is no longer the case.

Sadly due to the change in educational choices, fewer Jewish students attend public schools. This has created a situation in which there is limited interactions between Jews and non-Jews in the public school system of Skokie.

Rabbi Yochanan Posner, who is an educator at Chabad of Skokie, along with being a staff chaplain at Northshore Hospital stated:

Jews are a tiny minority in District 219 and yet Niles North and Niles West have done so much to make Jews feel welcome in school. District 219 offers Kosher meals, along with Hallal meals, and Hebrew language instruction, and the graduation was scheduled for a date which is not the Jewish Sabbath, and so much more. The local Jewish community is extremely grateful for that. District 219 works hard to create a learning atmosphere of inclusivity and equity and welcomeness. Each school has a banner which reads “Hate has no home here.” Students and parents and teachers appreciate this healthy learning environment.

Ms. Manrique took an oath to represent all the students in the district as a member of the Board of Education. However, she wore a Palestinian keffiyeh scarf as part of her graduation regalia, while passing out diplomas to students on the dais, in her official position as a board member. In so doing she forced students to have a political statement in their once-in-a-lifetime keepsake graduation photograph without their agreement. The Israeli-Palestinian conflict is unrelated to a high school graduation, and bringing it in is inconsistent with the social and educational goals of the school district.

About the Author
Vicki Polin is a feminist who has been a Social Justice Activist since her childhood. Vicki is also an award winning, retired psychotherapist who worked in the anti-rape field for just under forty years. For fun Vicki is an artist and nature photographer.
Related Topics
Related Posts
Comments