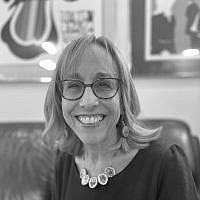 The Blogs
Talli Rosenbaum
Apply for a Blog
Advertisement
Please note that the posts on The Blogs are contributed by third parties. The opinions, facts and any media content in them are presented solely by the authors, and neither The Times of Israel nor its partners assume any responsibility for them. Please contact us in case of abuse. In case of abuse,
Report this post.

Women want to want. Their partners want them to want. And Sprout Pharmaceuticals has some women believing that with the new pill Addyl (flibanserin), dubbed ‘pink Viagra,’ their dormant libidos can be stirred again.

The most important sexual organ is the brain, and neurochemistry governs pleasure-seeking behaviors. Flibanserin works directly on the brain by raising levels of certain brain chemicals responsible for sexual excitation, (dopamine and norepinephrine) while lowering levels of serotonin, which dampens sexual responsiveness.

It is not known when and if this product will be available in Israel, but, expect that it will ‘arouse’ controversy here, as it has around the world, since being approved by the FDA last August.

Ever since Pfizer hit the jackpot in the late nineties with Viagra, the successful erectile dysfunction treatment, drug companies have been scrambling to find a pill for women that will help them function as well, and after several unsuccessful trials, Sprout introduced flibanserin. ‘Pink Viagra’ is, of course, a misnomer. While Viagra targets blood flow to strategic areas, flibanserin targets desire, rather than arousal. It is the pill intended to make women ‘want’ to engage in sex in the first place.

So what could be controversial about that? After all, studies have shown that up to 43% of women are reported to suffer from s sexual dysfunction. Why not fix that by taking a pill?

Because, say some practitioners, ‘female sexual desire disorder’ is a construct, created by ‘Big Pharma’ to make women feel inadequate if they aren’t as spontaneously ready, willing or as eager as their male partners to engage in sex, or if they don’t desire sex as frequently. This point of view  is  advocated  by  a grass roots campaign  called  The New View,  which criticizes the medical community for medicalizing female sexuality. They urge colleagues to consider that lack of desire not be chalked up to medical pathology, but that sexual problems can be due to socio-cultural, political, economic, psychological and relational contexts, whereby women may lack education and autonomy, or may experience guilt or shame around sex and pleasure.

However proponents of the drug jumped on the feminist bandwagon and reframed the low libido cure as a women’s rights issue as well, emphasizing that women have ‘equal rights’ to medical research and treatment of sexual concerns. After all, declared the influential ‘Even the Score’ website, ‘it’s time to give women the options they deserve for the treatment of sexual dysfunction’ In fact, Jewish Women International, self-described as ‘a women’s organization deeply concerned about healthy women, quality marriages and thriving families’ joined the FDA hearings, advocating the approval of flibanserin. The hearing also addressed safety concerns, as flibanserin is associated with symptoms of nausea, fatigue, dizziness and insomnia, and if it is combined with alcohol, can be dangerous.  However, advocates were able to demonstrate safety, citing a 2015 review study.

And then, this past Monday, the prestigious journal, JAMA (Journal of the American Medical Association) published findings, indicating that while some women report mild benefit, it is simply marginal in comparison to the risks. The research, coming from the Netherlands, is based on five published and three unpublished studies on 5,900 women.

This is indeed a blow to the women (and their partners) who were hoping for a magic cure for low libido. But it is not a big surprise to those of us who regularly treat women and couples who are often in a great deal of distress over elusive desire. Why a woman might lack the drive to engage in sex cannot be reduced to one single factor, whether it is chemical imbalances in the brain, hormones, lack of sleep, anxiety, or relationship conflicts. Often, a combination of factors is at play.

This does not necessarily mean that there is no value to this pill for some women, particularly when used together with other interventions. If there are women for whom the pill is effective and safe, that’s great. More likely, understanding more about sexuality and gender differences related to sex, getting more educated, (and sometime getting more sleep), communicating effectively with your partner and experiencing vitality in multiple areas of life can help too. Here  is some information about female desire, that couples often find helpful:

About the Author
Talli Yehuda Rosenbaum is an individual and couple therapist and is certified as a sex therapist by The American Association for Sex Educators, Counselors and Therapists (AASECT) , as well as the Israeli Society for Sex Therapy (ISST). She is also an AASECT certified sex therapy supervisor. She cohosts the Intimate Judaism podcast and is co-author of the book “I am For My Beloved: A Guide to Enhanced Intimacy for Married Couples.” and co-edited the Springer textbook entitled “The Overactive Pelvic Floor.” She has authored over 40 journal articles and several book chapters on sexual pain disorders, sexual health, unconsummated marriage, and sexuality and Judaism and is an associate editor of the Sexual Medicine Reviews. Talli earned a Masters in Clinical Sociology and Counseling and a certificate in Mental Health Studies from the University of North Texas in Neve Yerushalayim. She holds a bachelors degree in Physical Therapy from Northwestern University and before training in psychotherapy, treated patients as a physical therapist for 25 years. In addition to maintaining an active private practice, Talli is the academic advisor for Yahel: The Center for Jewish Intimacy. Talli frequently lectures both in Israel and abroad, to lay as well as professional audiences.
Related Topics
Related Posts
Comments