I can still remember vividly the excitement I and many other Israelis felt when the Camp David Accords were signed between Begin and Sadat, with Carter looking on; when Rabin and Hussein signed the Israeli-Jordanian peace treaty in the desert: and yes, when Rabin, Peres and Arafat signed the unfinished business of the Oslo Accords on the White House lawn with Clinton looking on, a necessary stepping stone without which there would have been no Israeli-Jordanian agreement.  Soon afterwards, Peres declared that a “New Middle East” was on the horizon, and major regional economic conferences were held in Jordan and Morocco. 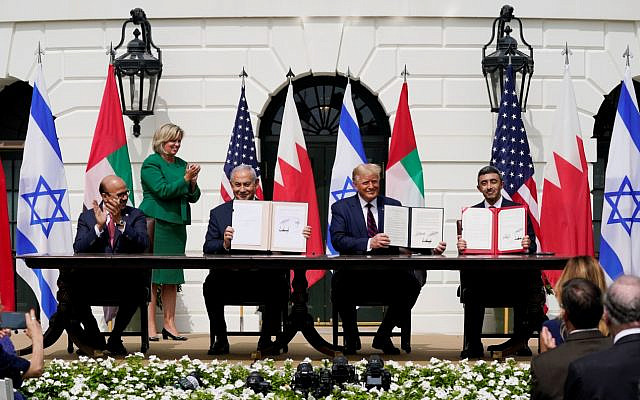 The signing ceremony at the White House (Photo: Times of Israel)

What we are witnessing is a reversal of Ben-Gurion’s peripheral state strategy.  When Israel’s independence was declared in 1948 and it encountered rejection from the entire Arab world, BG based Israel’s security in a hostile neighborhood on alliance’s with non-Arab states and forces in the region, first and foremost Iran and Turkey, followed by Ethiopia, the Kurds and the Maronite Christians in Lebanon.

After the fall of the Shah Iran has a hostile regime, Turkey is increasingly hostile though it still maintains relations with Israel, and Hezbollah has far more power in Lebanon than the Maronites.

Today Israel’s security in the region is based first and foremost on peace treaties with Egypt and Jordan.  Now normalization agreements with the UAE and Bahrain have been added to the picture, with perhaps more to follow.  The peace treaties with Egypt and Jordan were very important, since Egypt had led the Arab military conflict with Israel in three major wars – 1948, 1956 and 1973, and Jordan has also participated in the fighting in 1948 and 1967.

How can you call it peace when there was no war?

However the UAE and Bahrain have no borders with Israel, and not a single Israeli has died due to fighting with their military forces.  So it’s hard to call these peace agreements, since there was no war beforehand.

As Palestinian commentator Daoud Kuttab noted in a Zoom discussion held yesterday by the Israel Policy Forum, the combined population of the two countries makes up less than 0.5% of the Arab population in the region. That hardly represents a “new dawn for peace.”  As for the nature of the two regimes, well, the UAE has a population of close to 10 million residents, with a little over 1 million citizens and close to 9 million foreigners without rights doing most of the work.  As for Bahrain, there, the 1/3 Sunni part of the population rules over the 2/3 Shiite part of the population, again not exactly a paragon of democracy.

Still, agreements with additional countries beyond Egypt and Jordan are good both for Israel and the region as a whole. That’s where the yes comes in.

Yet, the core problem remains, the need to resolve the Israeli-Palestinian conflict.

That’s where the no comes in.

Both the UAE and the Bahrain foreign minister mentioned the need to resolve the Israeli-Palestinian conflict.  And the UAE spokespeople have all stressed the fact that their readiness to sign an agreement with Israel was based on the fact that Netanyahu gave up on his plan to annex part of the West Bank, an act which would have undermined the possibility of arriving at a two-state solution.

Netanyahu totally ignored the Palestinians in his speech, but the Hamas rockets which led to a split screen view of the White House and the communities near Gaza on Israeli TV ensured that the Israeli public was aware that the Palestinians are still part of the bigger picture.

Violence will not end the occupation, or gain Palestinians the right to self-determination in a state of their own.  In the long run it is only counter-productive.  However, it does remind the Israelis and the world that they exist, and are suffering. .

Hopefully the Emiratis are right when they say that being inside rather than outside the tent will enable them to have more influence in helping to resolve the Israeli-Palestinian conflict.   And the Gulf States, including first and foremost Saudi Arabia, continue to say that they support the 2002 Arab Peace Initiative, which calls for the establishment of a Palestinian state in the West Bank and Gaza, with East Jerusalem as its capital, amended to include mutually agreed upon one-to-one land swaps, as the basis for an end to the conflict with the Arab world.

Clearly the Palestinians have to get their act together, overcome their differences and be ready to not only say no, but also to say yes to new initiatives for resolving the conflict, based upon the two-state solution which is still viable, despite all the obstacles.

And Israel needs a leader ready to remember that the Israeli-Palestinian conflict still has to be resolved.

Perhaps a new Democratic administration in the United States in 2021, which will be interested not only in arms sales and historic deals but also in human rights and democracy, will help to move things forward.

And what about Iran? 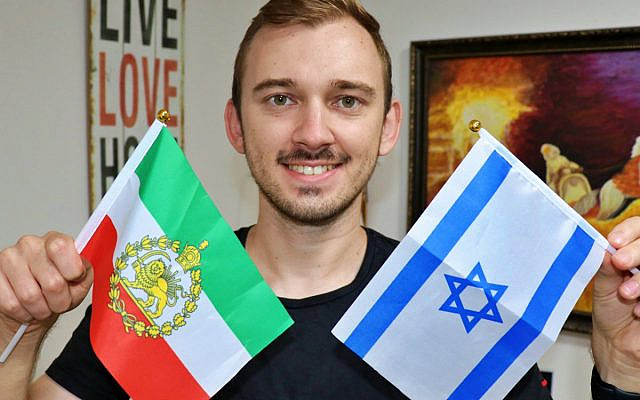 To return to Ben-Gurion’s original periphery theory, what about Iran?  Biden has pledged to return to Iran deal, which most senior Israeli security figures have said is in Israel’s best interest. And the many Iranians I met with between 2010 and 2015 in the quest for a Weapons of Mass Destruction Free Zone in the Middle East agreed that Israel and Iran were once allies, and logic suggests that they should be once again in the future.  However, they all added that Israeli-Iranian understanding has to be preceded by Iranian-American understanding.  A President Biden would be ready to move forward on that.  Even President Trump says that if he’s reelected, he will quickly make “a great deal” with the Iranians!  If progress is made on that track as well, maybe a “New Middle East” will not just be a pipe-dream, but also a reality.