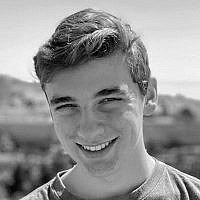 The Blogs
Rafi Granoff
Apply for a Blog
Advertisement
Please note that the posts on The Blogs are contributed by third parties. The opinions, facts and any media content in them are presented solely by the authors, and neither The Times of Israel nor its partners assume any responsibility for them. Please contact us in case of abuse. In case of abuse,
Report this post.

Early last week, hopping on my bike on my way to school, I opened my podcast app, shocked to discover that I was all caught up. Unable to bear the thought of a 3-kilometer ride in silence I quickly downloaded an audiobook I had long wanted to read: “Bad Republican” by Meghan McCain.

A quick and brilliant listen, “Bad Republican” was witty, insightful and includes many wonderful personal anecdotes about her father, the late Senator John McCain. But one of the main features of the book was her time on, and departure from, ABC’s “The View.” McCain attributed her departure in large part due to the toxic environment on the show, specifically when Joy Behar told her “I did not miss you. Zero!” live on air after McCain returned from maternity leave. But that wasn’t the most disturbing story told in the book.

That story took place in the makeup room, where anything McCain mentioned inevitably wound up in the tabloids soon after. One example of this was when she got engaged to Ben Domenech: the couple had agreed to keep their relationship private because her father was dying. But one morning, McCain was getting her hair and makeup done before she went on air when she mentioned that she had gotten engaged. Of course, it leaked.

McCain also says that ABC created a media narrative about clashes between hosts on “The View”, to increase the viewership. This phenomenon got so bad that McCain would enter the building and go straight to her office to avoid getting caught up in an exchange that would be put on Twitter or sold to the media. Eventually, due in part to this, McCain decided to leave the show because of the “toxic work environment.”

As disgusting as this culture of leaking private conversations to the media is, it’s not completely surprising or unprecedented in a television studio. But we expect better when it comes to major decisions of the nation’s highest court.

As Jonathan Peters pointed out, this is not completely unprecedented, even when it comes to Roe v. Wade itself. A memo by Justice Douglas to his colleagues in 1972 found its way to the Washington Post. Time published the vote and outcome of Roe a few hours before it was released.

But as NPR’s Nina Totenberg said, what happened today isn’t the same. “No fully-formed draft opinion has been leaked to the press or outside the court. Once or twice there may have been leaks that say how is something going to turn out, or after-the-fact that somebody may have changed his or her mind. But this is a full-flown, Pentagon Papers-type compromise of the court’s work.”

Immediately after it was leaked, partisans sprinted to their political corners. The right went into a full-fledged celebration, which is understandable because this is the culmination of half a century of their work. Many went too far. One example is Matt Wolking, a Republican strategist, who publicly speculated as to who may be responsible for the leak, going so far as to name a clerk whom he believes is responsible.

The left has been more insidious in its behavior, questioning the legitimacy of the high court and calling the ruling the end of the republic. Some have already started turning this “leaker” into a folk hero. The more creative Democratic strategists, after bashing the court, reckoned that overturning Roe wouldn’t actually be so bad because it would energize the party and save them in the midterms. Many politicians have already begun to fundraise off of this.

They have all missed the mark. Of course, everyone is entitled to their opinions on abortion. But there is a second major story here, one that isn’t getting the attention it needs: we should all be upset about and try not to politicize the fact that the institution that’s the highest arbiter of the law in the country was undermined, in an appalling way. As Chief Justice Roberts said the leak “was a singular and egregious breach” of trust in the court.

We do not yet know whether the leak came from a secretary, a clerk, or even a justice. As Christine Rosen and Matthew Continetti pointed out on the Commentary podcast, we don’t yet know whether this leak came from someone on the conservative or liberal side. There is an obvious explanation for it coming from a liberal. It is also plausible that a conservative in the court released it in order to deter a conservative Justice from joining Chief Justice Roberts in upholding the Mississippi law, as releasing the opinion shows who voted to overturn Roe v. Wade in February. So if in the final reckoning, there is another vote to uphold Roe, we would know which Justice changed their vote.

This leak sets a horrible precedent that is sure to erode not only the people’s trust in the court but the internal workings of its sacred body. Whether it was a secretary, a clerk, or even a justice, whether they were a conservative or a liberal, they have gravely impaired the court’s ability to function. By ignoring this, or even celebrating it as some voices outrageously have, we have too.

Much as the “toxic” environment on “The View” caused McCain to become more closed off out of fear that whatever she would say in the dressing room would be sold to the media, we can imagine the same culture taking root in the court if it hasn’t already. If clerks and justices are afraid to participate in rigorous debate out of fear that half-formed raw thoughts and ideas may be sold to the press, they won’t partake in it. And if they don’t, the quality of the institution will be crippled. We will have taken away a core tenant of the body, and we will all suffer as a result.

People are asking why faith in institutions is so low. This leak helps explain why.

About the Author
Rafi Granoff is a high school student living in Ra’anana Israel. Rafi has spent half of his life living in the US and half in Israel and is well-read on the history and politics of both countries. Rafi spent a summer interning for an electric rideshare start-up company in New York and this summer he will be an intern in Washington, DC for a Member of the US House.
Related Topics
Related Posts
Comments