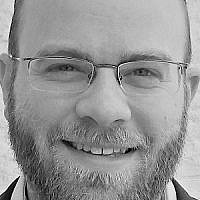 The Blogs
Chaim Tzvi Binstock
Apply for a Blog
Please note that the posts on The Blogs are contributed by third parties. The opinions, facts and any media content in them are presented solely by the authors, and neither The Times of Israel nor its partners assume any responsibility for them. Please contact us in case of abuse. In case of abuse,
Report this post.

Taking a much needed break from a usually busy schedule, I found myself sitting in one of the many bustling cafes in Jerusalem. Meeting me was a close friend who currently works as a Rabbi in one of the many American gap-year yeshiva programs. After exchanging pleasantries, we got down to business discussing many issues in our lives and in the collective life of the Jewish people. With many years of experience dealing with young religious students from America and the continual lack of interest in Aliyah that they express, the question for us was obvious; Is Zionism dead?

I want to begin by saying that in no way do I believe these young adults to be bad people. I do not for one second feel that these students have any nefarious intentions with their lack of “Holy Land” desire. Nor am I discussing other sects in Judaism which have overt anti-Zionistic beliefs which never had the intention of imbuing their children with a blue and white love. I am also not discussing the enormous number of unaffiliated Jews in North America, I would never have such expectations of those with no Jewish connection, whether emotional or spiritually, to identify with a seemingly foreign state.

I am mainly focusing on the part of the Diaspora which embraces Yom-Ha’Atzmaut, the Israeli flag, falafel, Eretz Yisrael, and most importantly the Torah. The responsibility of inspiring youth born abroad with a Zionistic love that we seemingly value rests mainly on the shoulders of parents, educators, institutions and mentors. And we must ask ourselves, are we doing it? Are we raising children with a desire to be active participants in the greatest comeback story of all time?  Do the institutions with Zionism as a focal point in its curriculum encourage these young, bright students to stay in Israel after their year or is there a pre-destined track awaiting them in Washington Heights?

The hardships of Jewish history had us as a people longing for a quiet retreat from the onslaught of anti-Semitic violence. The United States of America seemingly, after much hard work by Jewish immigrants, offered the tired Jewish people that safe-haven it so craved. Of course, this is not to say there were never challenges for the Jewish people in America, to believe so would neglect many years of hate crimes and discrimination. However, for the most part the American dream of opportunity and liberty was just as much of a reality for American Jewry as it was for the rest of the American public.

In today’s age the success of the Jewish people has been boundless, there are many successful Jews in all walks of American life. Whether it be in the entertainment, finance, hi-tech industries or even in the political sphere there are successful Jews to be found. This is also true of the Orthodox Jewish society in America. The comforts of success have lead to new heights of luxury within the religious world as a whole. With that added luxury has come an increased expectation to succeed in the same vein among the youth. This is not a phenomenon that is limited to the Jewish world, the wealth and mindset of the modern world in general has seen such drastic change over the last five to ten years that this has become a reality in all western societies.

After many years of mentoring and speaking with young adults I notice that when asked for life goals, passions or desires many cannot answer with any semblance of confidence. They simply shrug and candidly say, “whatever is easy and will make money.” It is an empty desire for success without the concrete reality of hard work that is startling. (This is also a major reason why many students struggle in the study of Talmud but that is a discussion for a different time.) The technological, societal, and even religious extravagances of America have created an apathy to a basic goal of the Jewish people for thousands of years, a return to Tzion.

The millennial lack of work ethic is alive in all aspects of western culture, but it is the antithesis to our Jewish tradition which makes it all so alarming. Our sages teach us explicitly that, “Ben Hei Hei says: According to the toil is the reward.” (Ethics of the Fathers 5, 23) This concept has finally been rediscovered even in the Gentile world by Dr. Jordan Peterson (a clinical psychologist and professor of psychology at the University of Toronto) more recently of Cathy Newman Chanel 4 interview fame. The crux of his new book 12 Rules for Life is exactly this message that you have a responsibility for your life and that life is going to be hard! Life is going to be chalked full of challenges and obstacles on the way to your greatness, and this is the reality and ultimately the necessity of the world we live in. But as Chazal taught us, it is incumbent on us to take that burden as an opportunity to grow, develop and ultimately shine receiving the ultimate reward for such hard work.

This message is missing in our children’s education! Instead of sugar coating the harsh realities of life by lowering standards or demands on students and by sheltering them from any discomfort, we should equip our students and children with the tools to overcome those very discomforts! Running away from them will not produce the resilient independent proud Jewish adults we so seek to raise.

This has everything to do with Zionism, the land of Israel, Torah and all facets of our lives! We are in the middle of a project which has many discomforts, it has many challenges, and complications. The goal is to give the best and brightest of the future the utensils to navigate through these encounters and not only come out on the other side as better individuals but also to come out as contributors to the beautiful tapestry that is the Jewish people’s history. The students we need should be ones full of vigor and fight, that want to pick up and join the most noble cause of all which is building the land of Israel with the people of Israel. We should be showering them with the encouragement to overcome and succeed, and in no manner, should we detract from the difficulties that lay ahead. We should show them that a life worth living is a life with purpose. The purpose which is already taught in the curriculum of the schools, on all the family trips to Israel, and in all the gap year program experiences. It is our job to give these students the ability to bring it out from within themselves the belief that they can contribute to the splendor of Am Yisrael in Eretz Yisrael through hard work.

Is Zionism dead? It could be, if we cannot impart on our students and children the determination to live a meaningful life.

About the Author
Originally from Toronto, Chaim Tzvi made aliyah and continues to learn in various Yeshivot. Upon his completion of Rabbinic ordination, Chaim Tzvi looks to lead the fight for change within Israeli public discourse by advocating conservative values and beliefs.
Related Topics
Related Posts
Comments
Advertisement