ISIS has already used chemical weapons on the battlefield a number of times and may attempt to sell them to conduct attacks on Western and other countries. As such Brennan urged that “it’s so important to cut off the various transportation routes and smuggling routes that they have used.”

These routes go through Turkey—and the Kurds are capable of sealing that.

As NATO chief Jens Stoltenberg underscored at the Munich Security Conference last week, Kurds must be a part of any Mideast solution. Thus as Turkey is now shelling Syrian Kurds and postured along with the Saudis to invade Syria—to attack Kurds and Syrian army that are also fighting ISIS and al Qaeda affiliates–US, NATO and EU need to pressure them to stand down. World powers also need to support Kurds to seal the border for good and cut off ISIS supply line with Turkey.

Last July Syrian Kurdish forces were rapidly retaking ISIS territories and close to sealing the border with Turkey to stem its supply line. Unfortunately Turkey abruptly stopped the advance and began to attack the Kurds.

As a result, Patrick Cockburn from The Independent argued that Erdogan’s attack on Kurds has degraded anti-ISIS efforts, forced the Kurds to fight a two-front war against ISIS and the Turkish army, and thereby strengthened ISIS. Others share his view that Erdogan deems ISIS as a useful anti-Kurd and anti-Assad asset.

Now that the Kurds are once again advancing in Aleppo to seal the border, on 12 February Turkish foreign minister Mevlut Cavusoglu confirmed that Ankara and Riyadh are suddenly postured to invade Syria and keep the supply line open for their “rebels”—days before a temporary ceasefire is due to come into force for humanitarian aid.

On 13 February Turkish Prime Minister Ahmet Davutoglu threatened military action against Syrian Kurdish PYD and began shelling YPG positions in Aleppo. Turkey considers them a terrorist group although there has been no evidence of PYD/YPG committing violence against Turkey.

Davutoglu further threatened to “take the same measures in Syria as we took in Iraq and Qandil,” referring to the relentless bombing campaign against PKK, although this would be difficult since US considers Syrian Kurds key allies. Unless Washington decides to betray and sell out the Syrian Kurds as they did the Iraqi Kurds last August—which may help explain the PYD hedging themselves and opening a representative office in Moscow this month.

All of this is occurring right before a ceasefire is to be implemented, and even while the agreement was being negotiated on the sidelines of the Munich Security Conference, it was discovered that US allies sent a massive shipment of ground-to-ground “Grad” missiles to anti-Assad rebels. Unfortunately this plot only further reinforces why Russia and other powers would doubt the veracity of their western partners’ commitment to halt the violence in Syria.

Moreover, most people do not believe Saudi Wahhabis are serious about fighting ISIS Wahhabis even if the Pentagon tries to peddle this narrative. As corroborated by Vice President Biden in October 2014 along with the 2012 Defense Intelligence Agency report, Riyadh has been supporting ISIS as an anti-Assad asset, and even counter-terrorism expert Max Abrahms noted some Saudis fear their troops would side with ISIS once inside Syria.

Saudi foreign minister Abdel al-Jubeir likewise confessed to a German newspaper his real goal is that “there will be no Bashar al-Assad in the future” rather than to directly confront ISIS, and cooperation with Turkey would also be problematic if Riyadh follows its definition of “terrorists” to include Kurdish fighters.

By distracting the anti-ISIS mission and holding it hostage to their agenda, Ankara and Riyadh are allowing ISIS to become even more powerful.

Edward Dark, an activist in Aleppo, noted back in 2013 that Syrians watched how their peaceful revolution was hijacked by Turkey/Saudi and other Arab Gulf states, pouring in Salafists that morphed into ISIS, Al Nusra, and others that care nothing for the norms of human rights, democracy, or justice for the Syrian nation. He admitted, “People here don’t like the regime, but they hate the rebels even more.”

Now Dark sees Syria’s only salvation is through reconciliation and a renunciation of violence, but lamented “that is not a view shared by the warmongers and power brokers who still think that more Syrian blood should be spilled to appease the insatiable appetites of their sordid aspirations.” With the impending Turkey and Saudi invasion, indeed more Syrian blood would be spilled including the Kurds.

Driven by hatred of the Kurds, Erdogan seems bent on escalating and prolonging the war at all cost of human lives in Syria—whether Turkmens, Arabs, Druze, Sunnis, Shiites, Alawites, or Christians—and sabotage another chance for ceasefire and hope for humanitarian aid.

What should be the reaction of the international community?

On 9 February, UPI reported that Syrian Kurdish forces YPG have occupied two villages in Aleppo, at the request of local Arabs seeking refuge from Russian and Syrian airstrikes.

YPG also reportedly transferred 30,000 displaced people fleeing the fighting to safety in the Kurdish-held city of Afrin, up from 10,000 the previous week according to a UN official.

In Iraq, Kurdish-held territories are also where civilians flee to safety from fighting and massacre by ISIS.

In June 2014, when the ISIS scourge first advanced into Iraq, UN officials reported some 300,000 Iraqis fled to “safe zones” in Kurdish controlled territory.

Kurdish territories in Iraq now host over 2 million refugees, including Yazidis rescued by PKK that are fighting together against ISIS, though according to BBC were also being bombed by Turkish F-16s.

Now there are reports that Turkey is constructing refugee camps inside Syria as a new buffer zone, and to prevent Kurds from closing the Syrian/Turkey border.

As such how do Turkey-controlled safe zones compare with Kurdish-controlled ones?

A November 2015 Atlantic article entitled “The Hidden Danger of Safe Zones in Syria,” Dominic Tierney argued that safe zones can only work if it is guaranteed and enforced by ground troops, protected from air and ground attacks, and if “great powers and regional actors are united and committed to protecting civilians.”

On the air account, Kurdish-held territories in Syria largely qualify given both US and Russian/Syrian warplanes do not target the Kurds. Turkish warplanes would unlikely target them given Russia controls Syrian air space.

On the ground account, Kurdish forces are formidable warriors with proven ability to effectively battle ISIS and Al Qaeda affiliates, so Kurdish-held territories are not only “safe zones” for refugees, but also genuine “ISIS-free zones.”

This is not the case for territories held by Saudi/Turkey-backed ‘rebel’ groups that have aligned with Al Nusra and other Islamic extremists, and where the lines among jihadi groups including ISIS are often blurred by various mergers.

And despite Turkey currently illegally building a new refugee camp inside Syria, and encouraging refugees in Turkey to cross the border to its rebel-held “safe zone,” some view this would actually become an “unsafe zone” by using them as human shields.

However as Erdogan pursues his ground war on Syrian Kurds, would Turkey attack refugees in Kurdish-held safe zones and exacerbate the humanitarian crisis to drive more refugees to Europe? Erdogan indeed threatened to flood Europe with refugees on airplanes and buses.

Even Taiwan is now worried about ISIS, with the image of ISIS blowing up Taipei 101 Tower last February. 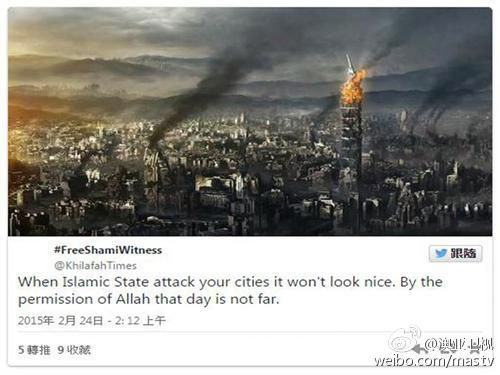 As such Ankara and Riyadh need to stand down from applying their Libya and Yemen intervention model to Syria that has empowered ISIS and Al Qaeda, and focus on the real threat. Asian powers should now also consider deploying troops to Syria under a UN resolution, and merge the US and Russian-led coalitions into a truly global coalition against ISIS.