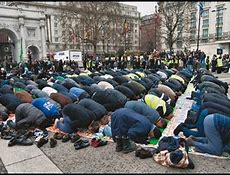 Islam and Socialism bring anti-Semitism
Let me make it clear: most Muslims and Socialists might be good friends, neighbors, co-workers but their natural urge to follow their own faith (ideology) makes their political and social activities destructive for a Judeo-Christian nation. When they live in the authoritative nations of their own faith/morality, they are happy. However, if they live in a Judeo-Christian nation, which cherishes individual freedoms and free-market economy, they feel unhappy and are trying to inject their “foreign” moralities into the nation’s laws to make their living more compatible with their morality, and it is destructive for a Judeo-Christian nation.

The notion that we are immune from such destructive influence is not supported by the history.

The German American Bund, an organization of ethnic Germans living in the United States before WWII, was marked by a pro-Nazi stance. Actual membership figures for the German American Bund are not known with certainty, but reliable estimates place membership at 25,000 dues-paying members, including some 8,000 uniformed Sturmabteilungen (SA), more commonly known as Storm Troopers. The German American Bund carried out active propaganda for its causes, published magazines and brochures, organized demonstrations, and maintained several youth camps run like Hitler Youth camps.

From the Tablet magazine

Clocking in at a concise 7 minutes and 6 seconds, including credits, A Night at the Garden is a compilation of pristine newsreel footage documenting a not-quite-forgotten moment in American history: the night of Feb. 20, 1939, which Americans at the time would have recognized as two days before George Washington’s birthday, when the German American Bund filled Madison Square Garden for a Nazi-themed party.

“Thanks” to WWII, the notion of the goodness of Nazi faith/ideology was destroyed but what would happen if Hitler would decide to change the world not by WWII but rather by local Nazi-led revolutions?

US population is greatly diverse – we have Jews, Christians, Muslims, Africans and Asians, poor and rich, atheists and church-goers. Some of them are running in the elections, and the great majority of them are running to protects and strengthen our American traditional morality through the legislative actions at various levels.
Those who are running in the elections to protect and strengthen our American traditional morality identify themselves just as Americans thus underscoring their belonging to the American traditional morality which they are going to protect and strengthen – the Judeo-Christian morality that defines the just society as a society where all citizens have the equal opportunities to reach their individual creative best (with no equal economic output) with the obligation to take care of those who cannot take care of themselves, where a government provides the legal and security foundation for all that.

However, some of those who are running in the elections have a strong non-American identifier meaning that they intend to work for redefining the American Judeo-Christian definition of the just society along the line of their identifier’s morality. That might be destructive. It is crucial to figure out what they intend to do legislatively, why it destructive, and how to restrain them.

Two such identifiers are now in play – Islam and Socialism.

If those who are running in the elections identify themselves as Muslims or Socialists, most probably, they want to impose on the nation – through government legislative orders – something of their own Quran-guided or Communist-manifesto definition of a just society.

In the Quran, the “dream” society is where Islamic morality is the only government-allowed morality – the Jews are spiritually eliminated, and the Christians become the second-class citizens; the individual freedoms are replaced by the Quran-guided government orders. All that is destructive for our Judeo-Christian spiritual and economic wellbeing.

Those who identify themselves as Socialists, their “dream” society most probably is what Karl Marx advocated – “From each according to his ability, to each according to his needs” that would be done by the wealth redistribution through the government brutal power. Of course, the Socialists would insist they are advocating not Karl-Marx’s Communism but a European-kind socialism with a “human face.” But history has already proven that when you exchange your individual freedoms for the government “goodies” you are losing the very incentives for your own productive work. It leads to the reduction of the material wealth in the nation, and – sooner or later – the government would have nothing to redistribute and provide everybody with the “goodies.”

The following fictitious story that I found in the internet demonstrates it in a very effective way.

An economics professor at a local college made a statement that he had never failed a single student before but had recently failed an entire class. That class had insisted that Obama’s socialism worked and that no one would be poor, and no one would be rich, a great equalizer.

The professor then said, “OK, we will have an experiment in this class on Obama’s plan”. All grades will be averaged, and everyone will receive the same grade, so no one will fail and no one will receive an “A” …. (substituting grades for dollars — something closer to home and more readily understood by all).

The second test average was a “D”! No one was happy.

When the 3rd test rolled around, the new average was an “F”.

As the tests proceeded, the scores never increased as bickering, blame and name-calling all resulted in hard feelings and no one would study for the benefit of anyone else.

To their great surprise, ALL FAILED and the professor told them that socialism would also ultimately fail because when the reward is great, the effort to succeed is great, but when government takes all the reward away, no one will try or want to succeed.

Human nature will always cause socialism’s style of government to fail because the world has producers and non-producers (makers and takers).

It could not be any simpler than that.

It is not hard to figure out why it is so. In the Judeo-Christian realm, Islam cannot be spread by public acceptance of Islamic morality – it is too foreign to the Judeo-Christian morality. Therefore, the only way to begin the Christianity-to-Islam transformation is by Islamic immigration that may bring Islamic members of Congress that may lead to legislative acts favorable for Islam. And here comes the Socialism because the Socialism means the power of Government, and is what Islam needs for strengthening its hold in the Judeo-Christian realm. As could be seen in the link below, that is what is going on nowadays in Europe.