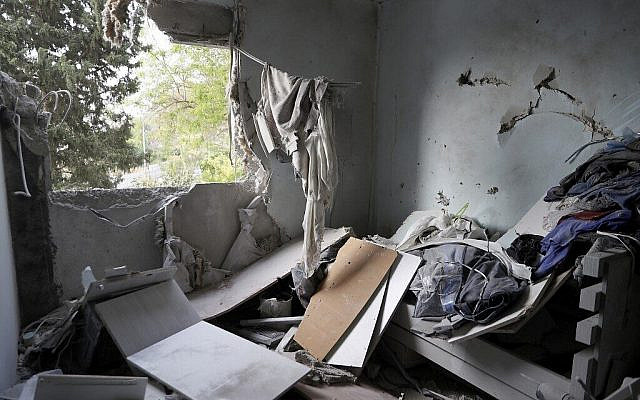 A picture taken early on May 11, 2021 shows a damaged building in Ashkelon after Hamas fired rockets from the Gaza Strip overnight towards Israel (Jack Guez / AFP)

At least 250 rockets have been fired at Israeli targets from Hamas-controlled, Iran-supported Gaza in the past 24 hours. To be clear, the goal is maximum death, destruction, and havoc.

Two centuries ago, the German poet Goethe said: “The hardest thing to see is what is in front of your eyes.” For some observers of this latest round of attacks from Gaza, it’s as true today as it was then.

The polar-opposite differences between Hamas and Israel couldn’t be greater, yet, while a number of governments, including the U.S., have strongly condemned the attacks, it wouldn’t necessarily be obvious when listening to certain other foreign government officials, such as in Turkey, much less media outlets like BBC and The Guardian.

For some, it’s about absurd, 50-yard evenhandedness and moral equivalence, as if there’s no distinction between arsonist and firefighter, terrorist and intended target, tyranny and democracy. As if on September 1, 1939, German-Polish “clashes” occurred or, on December 7, 1941, Japanese-American “violence” erupted.

Or, still worse, it’s all, and always, about Gaza’s “innocence” and Israel’s “guilt” — essentially, one fine day, with nothing else to do but plan how to provoke peaceful, serene Gaza, the big, bad Israelis decided to attack.

That, by the way, is a perfect illustration of reverse causality. Hamas has triggered a new round of conflict, based on lies about Jerusalem and abetted by religious incitement from Palestinian Authority President Mahmoud Abbas. Yet that’s quickly forgotten, if ever it was remembered in the first place. The focus instead becomes on the suffering of the Palestinian people and Israel is quickly blamed, rather than the very Palestinian leadership responsible for the violence and escalation in the first place.

Indeed, Goethe was right. There are those who can’t, or won’t, see what’s right in front of them. Ideological blinders get in the way. Or an abysmal failure of imagination about the bloodthirsty nature of Hamas. Or a frightening gullibility that allows people to believe whatever the Hamas propaganda machine churns out. Or, of course, irredeemable hostility to Israel, the lone Jewish-majority state in the world.

Hamas is a terrorist organization, pure and simple. That’s its official designation by the United States, European Union, Australia, Canada, and Japan (but not China and Russia). By stark contrast, Israel is a democratic country with an independent judiciary, the rule of law, free and frequent elections, freedom of worship, and a robust civil society.

Hamas has territorial ambitions on Israel. In fact, that’s putting it mildly: It would like to replace Israel in its entirety with a Muslim Brotherhood-ruled, Sharia-based state. Israel has no territorial ambitions on Hamas-ruled Gaza. To the contrary, Israel left it totally in 2005 to govern itself, something previous rulers, including Egypt and Ottoman Turkey, never remotely did. Israel hoped never to return.

Hamas, the sole ruler of Gaza since 2007, when it violently seized control from the Palestinian Authority, has, together with Palestinian Islamic Jihad, used the last fourteen years to smuggle in weaponry and develop military punch, rather than building the foundation of a responsible, prospering state. What could have become Singapore instead opted to model itself on Iran or Syria.

Israel seeks, as any nation would, to prevent Hamas from attaining its lethal goal. Would any other country on earth sit back quietly, heed outside calls for “de-escalation” or an end to “the cycle of violence,” or listen to sanctimonious lecturing from afar, while its citizens by the thousands rush to bomb shelters for years now, damage is inflicted on cities, including its capital city, and farms, the next terrorist plot is being hatched, and Israeli kidnapping victims are held for years? Of course not, and, as history has amply shown, few countries have demonstrated Israel’s restraint — yes, restraint.

For many years now, Hamas has had no compunction about deploying terrorist cells and weapons in civilian population centers in Gaza, fully aware that Israel has no choice but to appear to be targeting “innocent” people. Israel goes to unprecedented lengths to avoid falling into the Hamas trap, even having phoned and dropped leaflets in advance to warn civilians to leave target areas.

Hamas cynically tells the civilian population to stay put, not to react to Israeli warnings about imminent strikes. Tragically and tellingly, as far as Hamas is concerned, the more Palestinian casualties, the better.

Israel makes every effort to alert its entire population, Jewish, Christian, and Muslim, to Hamas missile strikes and move people into shelters as quickly as possible. Fortunately, Israel has also developed the remarkable Iron Dome anti-missile system to defend its territory, even as some critics have absurdly complained that it prevents a “fair fight.”

Hamas sees mosques as venues for stockpiling arms. Israel sees houses of worship, including mosques, solely as venues for prayer.

Hamas uses hospitals as terrorist redoubts. Israel uses its hospitals solely to cure the ill and injured, including, as I have witnessed, residents of Gaza who can’t find adequate care there.

Hamas aspires to kill as many Israelis as possible, with rockets fired indiscriminately (and some of which have misfired and fallen in Gaza, causing casualties). Israel seeks out the Hamas terrorist infrastructure, and, in the past, has even aborted operations when the risks of civilian casualties were too great.

Hamas, as the record amply shows, has no compunction about falsifying information, doctoring photos, staging scenes, and inflating numbers to make its case to the outside world. Israel, by contrast, goes to great lengths, even to the point of sometimes losing the edge in the “media race,” to verify information that it presents about its operations.

Hamas supporters explode in paroxysms of glee when Israeli targets are hit. Israelis don’t honk horns, shoot in the air, and pass out candy for doing what they wished didn’t have to be done in the first place, and voice regret when the inevitable mistakes occur. Apropos, what war in history has not included tragic mistakes leading to unintended casualties?

Hamas shouts from the rooftops that Israel is a brutal enemy. Israel, unlike any other targeted nation in history, provides a hefty percentage of Gaza’s electricity and allows the transit of much of its fuel and foodstuffs, even as rockets are fired from Gaza into Israel, and even as, often forgotten, Gaza also shares a border with Egypt.