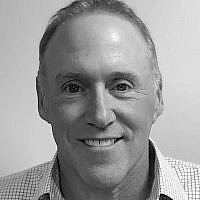 The Blogs
David A. Sherman
Apply for a Blog
Please note that the posts on The Blogs are contributed by third parties. The opinions, facts and any media content in them are presented solely by the authors, and neither The Times of Israel nor its partners assume any responsibility for them. Please contact us in case of abuse. In case of abuse,
Report this post. 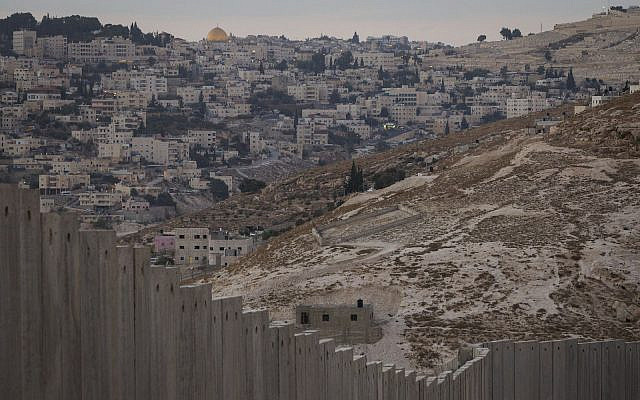 The Dome of the Rock in Jerusalem's Old City seen in the background of where the Palestinian side of the Separation Wall runs in the West Bank city of Abu-Dis. September 29, 2014. (Miriam Alster/FLASH90

Former AP Middle East Editor Dan Perry writes in The Times of Israel that “it’s not crazy to fear a West Bank pullout.” He’s correct, and that view lines up with a large segment of the Israeli public who are willing to tolerate the status quo for the sense of stability it provides and because of a well-founded concern over what would follow the exit of Israeli troops from the territories.

But Israel cannot remain in the West Bank forever. Perpetual control with no end in site will erode Israel’s democratic foundations, while annexing broad swaths of West Bank territory will threaten the state’s Jewish character and security by undermining the essential counter-terrorism coordination between the Israel Defense Forces and the Palestinian Authority. Thus, an acceptance of the present situation must be paired with a clear political horizon for the future based on a two-state solution.

While ideological support for annexation of the West Bank grows in the Knesset, only a small segment of the Israeli electorate actually wants Israel to retain the area for religious or nationalistic reasons. More than anything else, the majority is jaded by past experience. In particular, the 2005 Gaza disengagement and subsequent Hamas takeover, rocketfire, and Israeli retaliatory measures demonstrate that a unilateral withdrawal cannot provide security in the long run. Indeed, the Palestinian Authority was not enthusiastic about an uncoordinated pullout fourteen years ago, and after Hamas seized the Gaza Strip it is likely the PA would actually (discreetly) oppose a sudden Israeli departure from the West Bank. Moreover, if Hamas or a more extreme faction were to take power in the West Bank, it would leave major Israeli population centers dangerously exposed. These are not phantom threats but realistic eventualities that supporters of a two-state solution must contend with.

This takes us to the option of a negotiated outcome to the Israeli-Palestinian conflict that would mediate the terms of Israel’s exit from the territories. But any kind of formal peace process has long been dead. The Israeli government’s rightward drift prevents it from meaningfully engaging the Palestinians, who will not accept the terms Benjamin Netanyahu would present.

The Trump administration’s approach emboldens the most extreme figures in Israeli politics while actually rewarding Palestinian intransigence, with measures like cutting funding for USAID projects in the West Bank and Gaza and UNRWA providing ample reason for the P.L.O. to not engage with the Israelis or the United States. This worsened an already bad situation in which the Palestinian leadership is divided between the Islamic extremist Hamas, whose terror regime rules Gaza, and the authoritarian West Bank-based PA. With official contact severed with the United States, the Palestinians’ future moves may be more difficult to predict, and with less to lose, they may be more prone to brinkmanship and one-sided initiatives in the international arena.

So if a unilateral evacuation is too risky an option, and the peace process is over, how can Israel and its partners still promulgate a viable political vision?

There are actually a number of steps that Israel can undertake on its own — without removing a single soldier or settler — that will improve the country’s security while helping to lay the foundation for a two-state solution. Such measures include completing the security barrier, which has been left unfinished in part thanks to lobbying from settler interests who view the fence and wall as forming a de facto border, an impediment to unrestricted settlement expansion.

Other options include uniting Palestinian regions by carrying out minor expansions to Area B — currently under PA civil control — in order to reduce the number of isolated territorial enclaves within the West Bank and improve Palestinian contiguity. All of these moves must be accompanied by a political declaration that Israel renounces permanent sovereignty over areas east of the security barrier, while the territory between the fence and the Green Line will be subject to final status negotiations. A settlement freeze can be implemented east of the security barrier, freeing up most of the territory for a future Palestinian state while leaving about 80 percent of Jewish settlers — who reside in the large blocs that hug the Green Line — unaffected.

Proposals like these have been advanced by Commanders for Israel’s Security, a movement of more than 290 retired high-ranking officers from the Israel Defense Forces and security services, representing an overwhelming majority of those who meet the group’s minimum rank requirement. The advantage to such recommendations is that they only require a decision by the Israeli prime minister’s cabinet. Of course, that would necessitate a change in government in Jerusalem, but the upshot is that once Prime Minister Netanyahu leaves office, his successor will need not be encumbered by major political or logistical obstacles.

A two-state solution will be a serious but necessary undertaking in order to preserve Israel’s Jewish and democratic future — and its long-term security. Yet given how distant that outcome currently looks, it is easy to despair. The concerns raised by those who fear an immediate withdrawal from the West Bank must be reconciled with the imperative of two states. In order to avoid repeating the mistakes of the past, Israel should begin laying the groundwork now — long before any soldiers or settlers will leave the West Bank — for a sustainable resolution to the Israeli-Palestinian conflict.