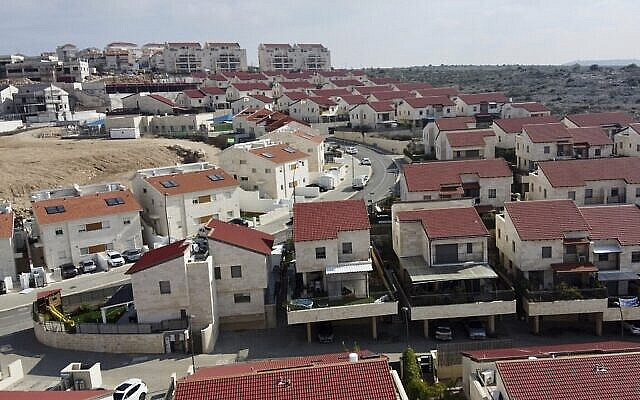 Israel is marking its 72nd Independence Day amid a global disaster that is no fault of its own. To complete the picture, the country is also courting another calamity, which unlike the corona crisis will be entirely of its making.

Benjamin Netanyahu’s imminent scheme to annex West Bank areas is a gamble that offers little and risks much, which Benny Gantz has agreed to through seemingly gritted teeth. According to the unity government agreement reached last week, the sides must agree on any legislation brought to and proposed by the government – with the exception of the annexation bill.

On that issue, the agreement says that “the Prime Minister will be able to bring the agreement to be reached with the United States on the application of sovereignty as of July 1st, 2020 for cabinet and government debate and for approval by the government and/or the Knesset.”

It’s amusing: Israel will seek permission from the Trump Administration on unilaterally annexing land which is under dispute with the Palestinians. Secretary of state Mike Pompeo said last week that this hot potato rests solely with Israel. That sounds like a green light – but it could flip after another second’s thought, changing interest, or impulsive tweet. The White House might bury this in committees and bureaucracy – and it might not. One can hope.

It is also possible that the Sunni Arab countries will make clear to Israel that this will not fly; also the US Democrats, who if ahead in the polls by summer might carry some clout. Meanwhile, Palestinian Authority President Mahmoud Abbas has been agitating against the prospect in calls to Arab leaders. But the government doesn’t fear him. The dominant view is that he has no recourse and the Palestinians feel defeated – which isn’t totally wrong.

So what’s the problem?

The problem is that Israel depends on the Palestinians continuing security collaboration with the IDF and on Islamic radicals to continue holding fire and being held at bay by the Palestinian Authority. To assume the current calm exists simply as a result of the security barrier and Shin Bet’s brilliance, and that it will continue forever despite provocations, is foolish. It suggests one has forgotten the nightmare of 2000-2005, with cafes and buses and supermarkets blowing up.

Perhaps somebody thinks the Palestinians were taught a lesson in that Second Intifada; after all, their casualties were four times higher and they came out of it in no better shape. That is, oddly, to give them both too little and too much credit.

The Palestinians had no rational interest to launch that uprising just because Ehud Barak’s offer at Camp David was inadequate in their view, or because Ariel Sharon visited the Temple Mount. Their economic situation had never been better and they stood to lose everything and bring the hated Sharon to power. Yet there was no serious opposition to the intifada. Polls consistently showed support for suicide bombings was high, and to make things clear Palestinian voters handed victory to Hamas, the global face of suicide bombings, in the 2006 election – their last.

It is not just that the Palestinians are radicalized and have shown a tendency to be dragged into a brick wall by the most radical among them. It is also that they have a very strong case, which many Israelis refuse to see. There is almost no way to defend 53 years of Israel’s ruling millions of members of another people while refusing to give them the right to vote for the ultimate authority that governs them. That authority is Israel, not the PA; it is comical to see Israeli rightists attempts to use the PA, whose establishment they opposed with a ferocity that led to the assassination of Yitzhak Rabin, as a fig leaf that makes everything OK.

Annexations would part with decades of policy against unilateral moves of this nature that recognized that this is a tinderbox and respected the idea that negotiations must determine borders. Such a move could absolutely blow up in Israel’s face. This is why the security establishment opposes it. This is why almost all retired security leaders oppose Netanyahu.

Is the move illegal? That’s debatable. Leftist purists will cite the Geneva Conventions and International Humanitarian Law that forbid annexations of occupied land while denying original occupants’ rights – but one could argue that this applies only when the land was taken from another state that claims it and Palestine itself is not yet a state. Or is it? This is an argument that cannot be resolved and that no one wants to have.

Whatever Israel will say, annexation would exacerbate tensions with much of the world – and also with the United States should Trump lose in November. If it includes the Jordan Valley it will seriously endangers the 1994 peace treaty with Jordan, which provides Israel strategic depth to the east and is critical to its security.

I don’t deny the strategic value of the West Bank – but the danger of a binational and undemocratic state is greater. And negotiations to partition the country will be greatly and gratuitously complicated by these moves.

Does annexation – or in laundered parlance, “extending Israeli law” – give Israel anything concrete? Not really. Israeli law is applied in the settlements through various trickery anyway. This is most obvious (yet still somehow not understood) in the fact that settlers can vote even though Israel has no absentee balloting. And annexation can be reversed, though with difficulty.

Netanyahu’s interest is perhaps to leave some sort of legacy that will impress the right-wing base. He may need them for yet another election.

But why would Gantz risk it? His people argue that the project enjoyed a majority anyway, despite the anti-Netanyahu camp having 61 out of 120 in the Knesset. The reason for this is that Gantz’s Blue and White contains several right-wingers who oppose Netanyahu because of his corruption scandals but still support adventurism in the occupied territories. They blocked Gantz from making his own Likud-free coalition, and they will support annexations. So will Avigdor Liberman, whose 7 Knesset members are otherwise part of the Gantz bloc now because they hate religious coercion that results from Netanyahu’s alliance with the Haredim.

So the excuse is based on solid foundation. The lunatic move indeed enjoys a Knesset majority.

And the Israeli public will probably support it too, unless the explosion comes faster than I foresee. Count on Netanyahu to argue eloquently that the annexed areas “would be part of Israel in any negotiated solution anyway.” So they’ll start with places like Gush Etzion and Maaleh Adumim, close to the pre-1967 border. Will the Palestinians be given reciprocal full sovereignty in areas that “anyway” would be Palestine, like Ramallah, without a deal? I do not think so.

The Gantz crowd hopes that at least in joining with Netanyahu, Blue and White can make the process be more responsible somehow. Maybe. But Netanyahu had a weak hand and is facing a bribery trial to start in weeks. You don’t get the sense that Gantz fought like hell against the annexation exception. One wishes he made better and more ruthless use of the cards at his disposal.

You would think responsible leaders would not seek to provoke a crisis for little benefit. But Israel is led by a prime minister who, like others in his right-wing populist cohort around the world, thrives on crisis.

One crisis, corona, helped him cling somehow to power after losing the election. Another crisis, sparked by the annexation, could be very useful too, in an election he can trigger anytime. Imagine what use he could make of Palestinians terrorism. Sometimes politics is the art of the possible. Sometimes it is an exact science.