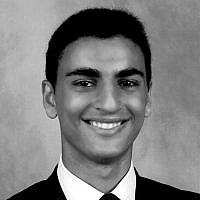 The Blogs
Joseph Taied
A Junior Business Student at NYU
Apply for a Blog
Please note that the posts on The Blogs are contributed by third parties. The opinions, facts and any media content in them are presented solely by the authors, and neither The Times of Israel nor its partners assume any responsibility for them. Please contact us in case of abuse. In case of abuse,
Report this post.

Iranians burn an Israeli flag during a parade marking al-Quds (Jerusalem) International Day in Tehran on May 31, 2019 | AFP

It is heartening to see recent images of the Iranians refusing to step on the flags of the United States and Israel. However the reason why it is such a delight for me is their past desecration of these flags and disrespect for these Western democracies. Unfortunately, the same ideology that saw disrespect for the US and Israel has been adopted by some Americans, even some Congresspeople. In this article I will debunk several arguments anti-Zionists employ in their hateful campaign to undermine the one and only Jewish state in the world. I understand that acknowledging these arguments may lend them credence, but nonetheless I feel the need to address them.

Myth: Israel is an apartheid state

Fact: Israel is a democratic state that allows all citizens to vote, hold political office—from serving as a Member of Knesset (MK) to Prime Minister. The Joint List, a political alliance of the major Arab-majority political parties, holds the third largest faction in the Knesset. Salim Joubran is an Israeli Arab who interprets the nation’s laws as a Justice on Israel’s Supreme Court. Dr. Samer Haj-Yehia, another Israeli Arab, serves as Chairman of the Board of Israel’s oldest and largest bank, Bank Leumi. Also, while not required of them, some Israeli Arabs serve in the Israel Defense Force (IDF).

By the way, where are the Jews of the Arab world, which once served as a fertile Diaspora for the world’s Jewish population? Exiled during the 20th century. According to the Israel Ministry of Foreign Affairs, “Current research estimates that the number of Jews living in Arab countries and Iran totaled more than 850,000 at the time of Israel’s independence. Some scholars even think the number is closer to one million.” As of 2012, the Jewish population in the Arab world numbered 4,315 Jews. Where is the real apartheid?

Myth: BDS is not an antisemitic movement

Fact: The Boycott, Divestment, and Sanction (BDS) movement singularly targets the one Jewish State in the world with calls for severing economic ties with Israel. This prejudiced scheme is impossible to accomplish given the depth and breadth of technology that Israel exports without which ordinary people could barely function. Beyond its impracticality, BDS uniquely recommends Israel as the focus of international condemnation. While autocratic regimes in Syria and Venezuela murder their own civilians with chemical weapons and starvation, the BDS movement has declared economic war against Israel—a Western democracy with impeccable human rights and military protocol—out of pure Jew-hatred. This bigoted campaign eerily harkens back to the Holocaust, which began with a boycott against Jewish products in Nazi Germany. The BDS movement, which calls for the labeling Israeli products in much the same way as the Nazis did, is indeed antisemitic to its core.

Fact: The notion that the IDF is a villainous squad intent on murdering innocent civilians is so asinine it hardly deserves a refutation. Like any country’s army, the Israel Defense Force pursues Israeli national security. Often in response to terrorist organizations like Hamas and Hezbollah raining down missiles on innocent Israeli civilians, the IDF fights back. The first line of defense is the Iron Dome, an anti-missile defense system ingeniously developed by Israelis themselves that shoots rockets out of the sky.

While the Iron Dome is largely successful, it is not entirely effective and innocent Israelis are sometimes harmed. Often in response to these attacks and other terrorist activities, the IDF takes out the Jihadists who perpetrate the attacks and plan others. In order to prevent Israeli counterstrikes, Jihadists frequently base their operations out of schools, hospitals, and mosques in ploys that use women, children, the sick, and houses of worship as human and structural shields. The IDF ensures that innocent civilians who might find themselves in the way of its pinpointed strikes on terrorist bases are adequately alert of its plans. These warnings include dropping warning leaflets in Arabic from the sky, informing neighbors, and putting the lives of its own soldiers in danger by knocking on doors to notify civilians.

Israel is a Western nation that is a bastion of democracy within a region muddled with autocratic, Islamist rule. The fact of the matter is Israeli Arabs—including the secular, female, LGBTQ, and other groups—benefit from many rights they are denied in other Muslim-majority nations in the Middle East. That’s right. Israeli Arabs need not bend the knee to an Ayatollah who values oil revenue more than the lives of citizens who take to the streets to protest his regime’s reign of terror. Women walk the streets freely clothed, unfearing of having acid poured on their faces or being abducted for the crime of showing a little hair or skin. Gays live without the thought of being hanged from cranes as other people of the LGBTQ community are in some Muslim countries. Those who seek to defame Israel as an intolerant state ought to turn their attention to Her neighbors to witness true bigotry.

About the Author
Joseph Taied is a junior at NYU's Stern School of Business, studying finance and economics. A first-generation American and the son of Iranian Jewish immigrants, Joseph is an ardent Zionist. He is involved with Jewish clubs on campus as well as real estate, business, and political associations. In his free time, Joseph enjoys watching sports, playing billiards, and spending time with his family.
Related Topics
Related Posts
Comments