The Blogs
Paul Mirbach
(PEM)
Apply for a Blog
Please note that the posts on The Blogs are contributed by third parties. The opinions, facts and any media content in them are presented solely by the authors, and neither The Times of Israel nor its partners assume any responsibility for them. Please contact us in case of abuse. In case of abuse,
Report this post.
“We come on the ship they call The Mayflower
We come on the ship that sailed the moon
We come in the age’s most uncertain hours
And sing an American tune.”
(Paul Simon, American Tune)

In 1620, a small sea vessel carrying 102 passengers left Plymouth, England, and crossed the Atlantic in search of a New World. It was called the Mayflower. Persecuted by King James 1 because of their religious beliefs, they sought freedom. They were desperate and intrepid, driven by their faith. They left behind them life with no future but the prospect of oppression. The journey lasted 66 days, on stormy seas and with the danger of the ship capsizing on more than one occasion. It was a journey that gave birth to a nation. 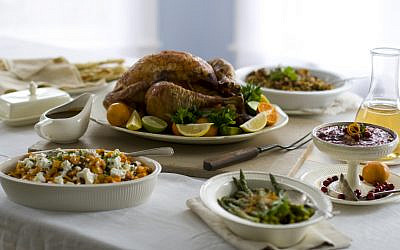 In July 1947, a sea vessel left the port of Sete in France, ostensibly bound for Istanbul. It carried 4515 passengers. It was called the Exodus, and although it was intercepted and all its passengers were returned to displaced person camps in Europe, the impact it had on international opinion was critical in changing the parameters of Britain’s policy towards Jewish immigration to Palestine post-WWII. The international attention the saga generated forced Britain to realize that its White Paper policy was untenable. The Exodus was one of 64 vessels packed with holocaust survivors that defied the British White Paper and attempted to break the blockade to reach Palestine. It became the symbol of our resolute purpose to create a national home, a home for Jews. The passengers on the Exodus also determined to leave centuries of persecution behind them and to create a new world for themselves and their (our) people. They too sought freedom. They too were desperate, driven, determined to build a state which would be a refuge for all Jews from persecution. They too gave birth to a nation. 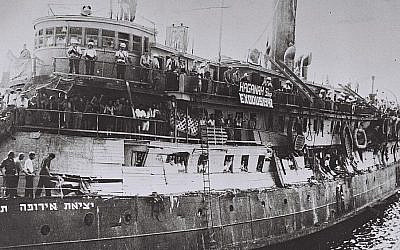 The Haganah ship Exodus 1947. (Courtesy of The Times of Israel. photocredit wikimedia commons).
Our great-grandparents left the shtetl and Russia to work the land and set our borders, living off the generosity of the land and its harvests, making the desert bloom and the swamps malaria-free. They too were Pilgrims, who journeyed to the Promised Land. However, while the Pilgrims of Plymouth crossed the Atlantic to follow their dream of creating a New World which would become their home, for the Pioneers of Palestine and those that crossed the Mediterranean from post-Holocaust Europe, their dream was to return to our land and rebuild our nation. Not a New World, but an Altneuland.
There is much for us to give thanks for. Israel’s existence and the Law of Return give Jews around the world the confidence to flourish in the knowledge that never again will we be homeless and helpless, trapped between persecution and acquiescence to our tormentors for survival, with nowhere to go. It provided promise, hope and purpose to prisoners of Zion, and helped people like Natan Sharansky, Yuli Edelstein, and Ida Nudel to get through the harshest conditions of their incarceration, that we will never give up on them. On a personal level, it is my home and gives meaning to my life.
So, we don’t have maple syrup. We have Pomegranates. We don’t have pumpkin. We have hummus. Sometimes we have turkey, but I prefer shawarma. And God knows, we need a national holiday, devoid of political acrimony and conflict. A day when we can come together in celebration and thanks, and not mourning, to express our appreciation for having a country – and what it means to us. To be thankful for what we have, without “buts”.
A day that we can say “ Modim anu she-yesh lanu medina” rather than “Ein li Eretz Acheret”.
Happy Thanksgiving.
About the Author
Paul Mirbach (PEM), made aliya from South Africa to kibbutz Tuval in 1982 with a garin of Habonim members. Together they built a new kibbutz transforming rocks and mud to a green oasis in the Gallilee. He served in infantry during his army service, serving in both Lebanon and the West Bank, including on reserve duty during the first intifada. Paul still lives on Tuval with his wife and two sons.
Related Topics
Related Posts
Comments