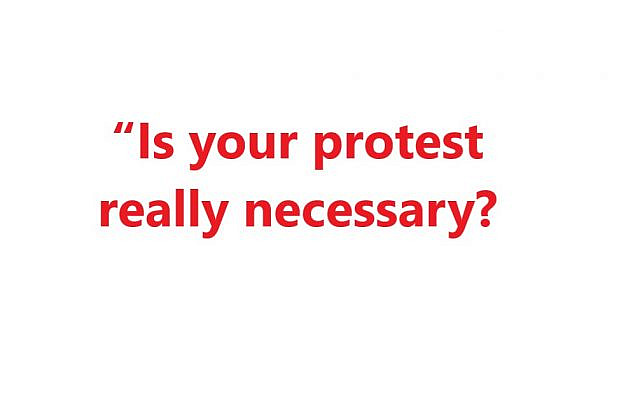 Following the UK Wartime Poster ..... (Image by the author)

“5 arrests, some clashes as thousands protest against Netanyahu”
(Times of Israel 26 September 2020)

It may come as surprise to the handful of protesters outside the prime minister’s residence, but Israel is a democracy. The ruling party, and hence its ministers and prime minister, is chosen by the majority of its citizens. As of March 16, 2020, there were 6,453,255 Registered Voters. Elections in Israel usually draw some 70% of those eligible to vote; a reasonably high turnout, comparable to many other western democracies.

At first glance, tens of thousands of protesters may sound like a lot but against 6,453,255 Registered Voters it is a drop in the ocean, a mere handful.

It is not clear how these protesters are supporting themselves. Is someone paying them to protest, day after day, instead of working for their living as do many of us 6,453,255 non-protesters? Are these professional protesters? Is there a Protesters Union? And who is paying for the posters, the banners and the loud-hailers? This is not just a random group of people, there is professional organisation behind these ‘popular’ protests.

Do as I say, not as I do – dozens of protesters, so worried about Netanyahu’s alleged offenses, see no problem in breaking the law themselves. The police are issuing fines to protestors who believe that the rules for social distancing and wearing masks do not apply to them. A few have gone even further in their ‘protests’ and attacked police officers who are only doing their duty.

The protestors should learn something about civic responsibility. The choice is simple; accept the democratic will of the people and wait for the next election to try and make a change, or to vote with their feet and leave the country. They could try for some real democracy in North Korea, Saudi Arabia or even near-by Jordan.

There is no doubt that Israel is in crisis, a health crisis, possibly an existential crisis. But this crisis will not be solved by a bunch of screaming protestors., the virus has no interest in protests. They could, perhaps, protest at our government’s handling of the corona virus, but a glance at the situation in many other countries would show them that we are far from the bottom of the world’s new league table.

I write this moments before the start of Yom Kippur. We, as a nation, have much to atone for. Let us hope that the protesters will take time to reflect on the need for their protests in a fully democratic country. As the UK’s wartime posters might have said – “Is your protest really necessary?”