The increasing irrelevance of American Jewry–who is now more dependent than ever on Israel as a core aspect of its Jewish identity–is causing the divergence between the two communities.

It’s like a Chinese finger trap. The harder you try to get out the harder it is to escape. American Jews say to the state of Israel, “Be more like us. Accept our liberal interpretations of Judaism, our rabbis, our marriages and conversions. Make peace with the Palestinians already. End the occupation. Give the African refugees Israeli citizenship. We loved Obama and you despised him. You love Trump and we despise him.”

Israelis answer, “Who in the world are you to tell us what to do? You don’t live here. You don’t bother to learn to speak Hebrew. You don’t serve in the army. You could make aliyah, but you chose not to. You’re asking us to do things that will affect us so that you can feel good about yourselves? If you don’t like who we are and what we do then just leave us alone.” 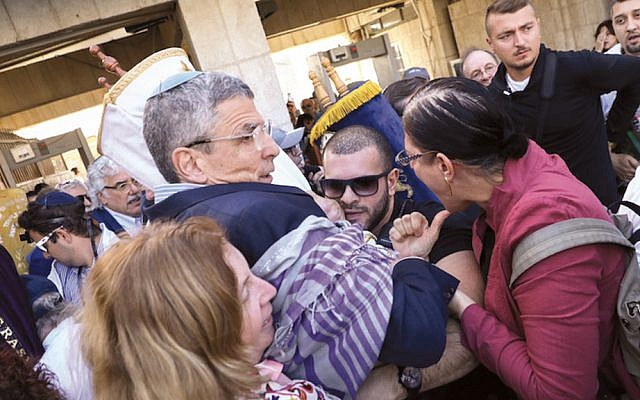 Rabbi Rick Jacobs, head of the Reform movement, center, Rabbi Anat Hoffman, and other non-Orthodox Jews clash with security guards at the entrance to the Western Wall plaza in Jerusalem on November 16, 2017. (Noam Rivkin Fenton/Flash 90)

American Jews keep insisting and fighting for Israel to be more like them so that they can feel more comfortable identifying with Israel. But they don’t realize that Israel is like the lighthouse, whereas the American Jewish community is like a large cargo ship, or several large ships. The lighthouse is the anchor, attached to the ground, guiding those who chose to be guided by its light. Those who don’t want to take advantage of the lighthouse risk running up onto the rocks and sinking their ship. The lighthouse will be there any time they need it. But as opposed to the ships, the lighthouse does not move. It remains in place.

Birthright is a step forward, for sure. When a Jew comes on a Birthright trip, every second in Israel is an opportunity to strengthen one’s Jewish identity. A trip to the mall or riding a bus in Israel are all ways to solidify one’s feeling of being Jewish.

Some have called for a “reverse Birthright.” The idea is to bring Israelis to America so that they can experience what it is to be a liberal American Jew. If America was a liberal Jewish country that would make sense, but since American Jews are a minority in a majority Christian country, it’s asking the lighthouse to come to the ships.

A trip to the mall or a ride on the subway in America is just a trip to the mall. There’s nothing Jewish about it all. Bringing Israelis to liberal synagogues might show them that liberal Jews care about being Jewish but there’s no such thing as a “reverse Birthright,” especially considering that America is not our birthright whereas Israel is.

American Jews that really care about the future of their community will have to come closer to the lighthouse. They will have to make a deep connection with Israel by visiting often, sending their children to programs in Israel, learning Hebrew, listening to Israeli TV and radio and embracing Israel as it is, not the imaginary Israel that many liberal American Jews wish existed.