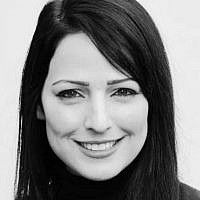 The Blogs
Gadeer Kamal-Mreeh
Apply for a Blog
Advertisement
Please note that the posts on The Blogs are contributed by third parties. The opinions, facts and any media content in them are presented solely by the authors, and neither The Times of Israel nor its partners assume any responsibility for them. Please contact us in case of abuse. In case of abuse,
Report this post. 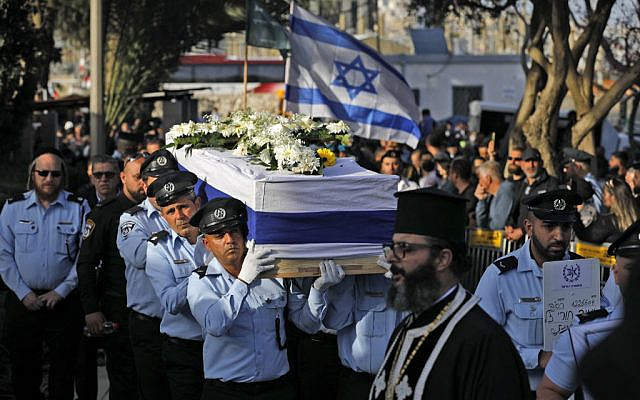 Israeli police officers carry the coffin of police officer Amir Khoury, who was killed in a terrorist shooting attack in Bnei Brak while saving others, during his funeral in Nazareth, on March 31, 2022. (Jalaa Marey/ AFP)

Four terror attacks within a week. Eleven Israeli citizens killed. Among them two Arabs. Brave Arabs. Yazan Falah, a Druze Border Police officer, was killed in the terror attack in Hadera. In Bnei Brak, Amir Khoury, a heroic Christian policeman who succeeded in killing the terrorist and saved tens of lives of Haredi Jews, was also killed.

The terrorists who committed the attack in Hadera are Israeli Arabs from Umm al-Fahm. The brother of one of the terrorists is an outstanding detective for the Israeli Police and works as a policeman in Kefar Sava. Amir’s girlfriend, Shani, is a Jewish Israeli woman.

The complexity of this situation is mind-blowing. This is Israel today. It is simultaneously surreal and amazing to see that these terror attacks show us, the diverse populations of Israel, just how much our lives are intertwined. The dimensions of our shared society, Jews, Muslims, Christians, and Druze, are inexorably bound to the same experience.

We have always been told that terror does not distinguish between Arabs and Jews. We saw that in the past. But something else is occurring now, and it is a visceral energy in the atmosphere. Apart from the few extremists on both sides, the reaction of Israeli society, Arabs and Jews, to the recent terror attacks has been impressive and striking.

The sentiment that we heard from the majority Arabs Israelis is: Those terrorists don’t represent us. The fact that they used the word “terrorists” is essential. There are dramatic and rapid changes occurring in Arab Israeli society.

On the other side, following the Bnei Brak terror attack, Chanan Rubin from the Eilon kibbutz in northern Israel organized a fleet of buses for Haredim from the city who wanted to pay their respects to Amir Khoury and participate in his funeral. Khoury, they said, was a hero who had saved lives, Jewish lives, in their neighborhood.

The poignant photos we saw this week in the military cemeteries were of Christians, Muslims, Druze, and Jews, condemning the attacks and declaring their united front to fight extremists.

Arab Israeli citizens, more than ever, feel part of Israeli society and seek full integration. Israeli Jewish society is working, and needs to keep working hard, to strengthen Arab Israeli citizens’ sense of belonging to the Jewish state of Israel. What is incredible, however, is the extent to which Israelis are working so hard to strengthen our social resilience. We are building bridges, closing the gaps between us. It is happening, and it is astonishing and tangible.

After years of instability, four elections, no budgets, and no real functioning government, Israel has succeeded in stabilizing the system. The new government, though it is complex, contributes to the healing process, succeeding in uniting and rebuilding trust between Israelis. We see it through the efforts of its work. We see it in numbers. This government doubled the budgets for the Arab sector and is working to close the gaps.

It is a long and sometimes painful process toward civil equality in Israel. Both Jews and Arabs have to give and take, and practice flexibility and pragmatism. Mutual understanding is the name of the game. It has taken a few years too many, but it is finally happening.

This government is first and foremost proving to the world and to Israel’s own citizens that yes, we can. We can work together — Mansour Abbas and Naftali Bennett, Arabs and Jews, right and left. And we can see the direct corollary of this sentiment in the street, on the ground.

Meanwhile, in a broader regional sense, Israel and its Arab neighbors are also normalizing relations, working hard to implement and extend the Abraham Accords.

The rapid changes in the new Middle East from the macro perspective, in the region, contribute to closer interactions between Arabs and Jews in Israel itself. The astonishing and heartwarming photos we saw last week at the “Negev Summit” in Israel help us realize and fully comprehend the greatness of this step forward. It allows us to feel that we are all brothers and sisters, or cousins, depending on whom you ask.

It is therefore of the utmost importance for Israeli emissaries like myself to accurately reflect the true reality of Israeli society. The work that we do here in the US is crucial to breaking down stereotypes. We mirror Israeli society to communities, students, and policy makers who are thirsty for knowledge, but whose superficial understanding and delineated agendas are buried deep in their consciousness — a dilemma only exceeded in significance by their ignorance of the true face of Israeli society.

I was sent to North America by The Jewish Agency for Israel — as a Druze woman, as an Arab, as an Israeli representative — to work with Hillel International on campuses and universities, as well as with the Jewish Federations and our organizational partners. I was sent to educate around this real and sophisticated Israel from my authentic point of view, through my extensive knowledge and experience as a minority — as a member of the periphery, as a woman. It is a fascinating dynamic. This is the new reality. It is time to view Israel in this light and cast aside damaging, unfounded stereotypes.

One month ago, at the headquarters of Hillel International, Jewish Agency representatives had a meeting with our American colleagues. We all sat together. Myself, a Druze woman and two Jewish women, one from the settlement of Yakir and the other from the Ethiopian Israeli community. We didn’t talk about diversity. We, ourselves, were the diversity.

As emissaries, this is what we do. We share our unique stories and lives as Israelis, each one with a different identity, from a different place in Israel, background, religion, and language. We deliver the real, authentic Israel. We are the expression of rich, diverse mosaic that is Israel. We connect the people, share the stories, and educate about inclusion, beauty, complexity, potential, challenges, and difficulties. We talk about Israel, warts and all.

And it is crucial to know that after 73 years of the modern state’s existence, we are robust enough, brave enough, strong enough, and evolved enough as a society to conduct this work. We strengthen our relationships by fostering constructive dialogue and meaningful discussion about ourselves, our identity, and the future. We talk about our achievements but also about our mistakes. We have a unique ability to learn from our mistakes – to discuss, to openly criticize, to suggest, to imagine. This is the basis of Israel’s resilience and has allowed the country to become a regional superpower.

In the end, I truly believe that in order to strengthen our society, we always need to start from inside — to enhance peace among us, the Israelis, to be active and involved citizens who talk, work, agree, disagree, and play significant roles together to build a better future. Ultimately, despite the domestic issues and challenges that we are dealing with (like any other country), we are still a vibrant democracy. We are still the villa in an ever-deepening and threatening jungle. We are still the island of stability in this chaotic neighborhood called the Middle East.

We are Yazan Falah and Amir Khoury.

About the Author
Gadeer Kamal-Mreeh is a former MK (she was the first Druze woman in Knesset), and is currently serving as the first non-Jewish Israeli senior shaliach for The Jewish Agency for Israel, in Washington, DC.
Related Topics
Related Posts
Comments