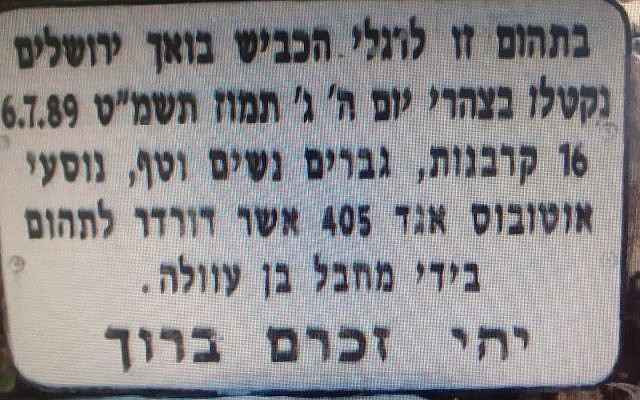 This plaque was placed at the site of the Memorial to the victims of the Egged Bus 405 Terrorist Attack on the main road between Tel Aviv And Jerusalem near Telz-Stone on Gimmel Tamuz - 5749 - July 6, 1989

Monday night marked the beginning of Israel Memorial Day where the whole country honored all those who gave their lives in defense of the Jewish State. Memorial Day for the Fallen Soldiers of Israel and Victims of Terrorism’[2]), is Israel‘s official remembrance day, [3] enacted into law in 1963.[4] While Yom HaZikaron has been traditionally dedicated to fallen soldiers, commemoration has also been extended to civilian victims of terrorism.

Eliezer Yehudah Beer came back home earlier this month to a hero’s welcome. He had survived an experience that perhaps was very difficult to understand. The founder of the organization devoted to saving lives, was placed in a life threatening situation himself while out doing a Mitzvah collecting money for his organization. Very hard to understand why of all people, Eli had to be put in this position.

If anyone mentions the date Gimmel Tamuz today, many people would think of the Chabad Rebbe’s Yartzeit. But I also want to point out that the Egged Bus 405 Terrorist attack took place on Gimmel Tamuz. In addition, PM Netanyahu’s Eulogy the day after the discovery of the bodies of the three Yeshiva Boys who were kidnapped and murdered in 2014, also took place on Gimmel Tamuz. There are interesting stories related to the Chabad Rebbe which I want to describe in my next Blog, but for this Blog, I will concentrate on the 405 Bus Attack and the murder of those three Yeshiva boys in conjunction with Israel’s Memorial Day. And I feel there is an added tie-in with the fact that Eli Beer has suddenly recovered and returned home to be with his immediate family and United Hatzalah staff and volunteers.

A Closer Look At The 405 Egged Bus Attack

Reading about Eli Beer’s background and why he decided to start Hatzalah is an interesting story in itself. One part that shouts out to me is the time Eli along with many other volunteers assisted in the rescue of victims resulting from the Egged Bus Number 405 Terrorist Attack that took place on the main road between Tel Aviv and Jerusalem, near Telz-Stone.

This story was contained in Mispacha Magazine, November 28 2018-

On July 6, 1989,  Eli was about to celebrate his 17th birthday, and had already spent close to two years riding in the back of an ambulance as a volunteer medic for Magen David Adom. That’s when he came upon a scene that we should not know from.  The Tel Aviv-Jerusalem 405 bus terrorist seized the steering wheel of the packed bus and sent it careening down a cliff into a ravine outside of Telz- Stone, killing 16 civilians, including one American and two Canadians, while 27 passengers were injured.

Some of the passengers were burned alive.  Eli was one of the dozens of volunteers who slid down the muddy slopes to help, but he was just a kid without any authority and there wasn’t much he could do. But you can imagine the shock on all of those rescuers faces when they arrived at the scene. 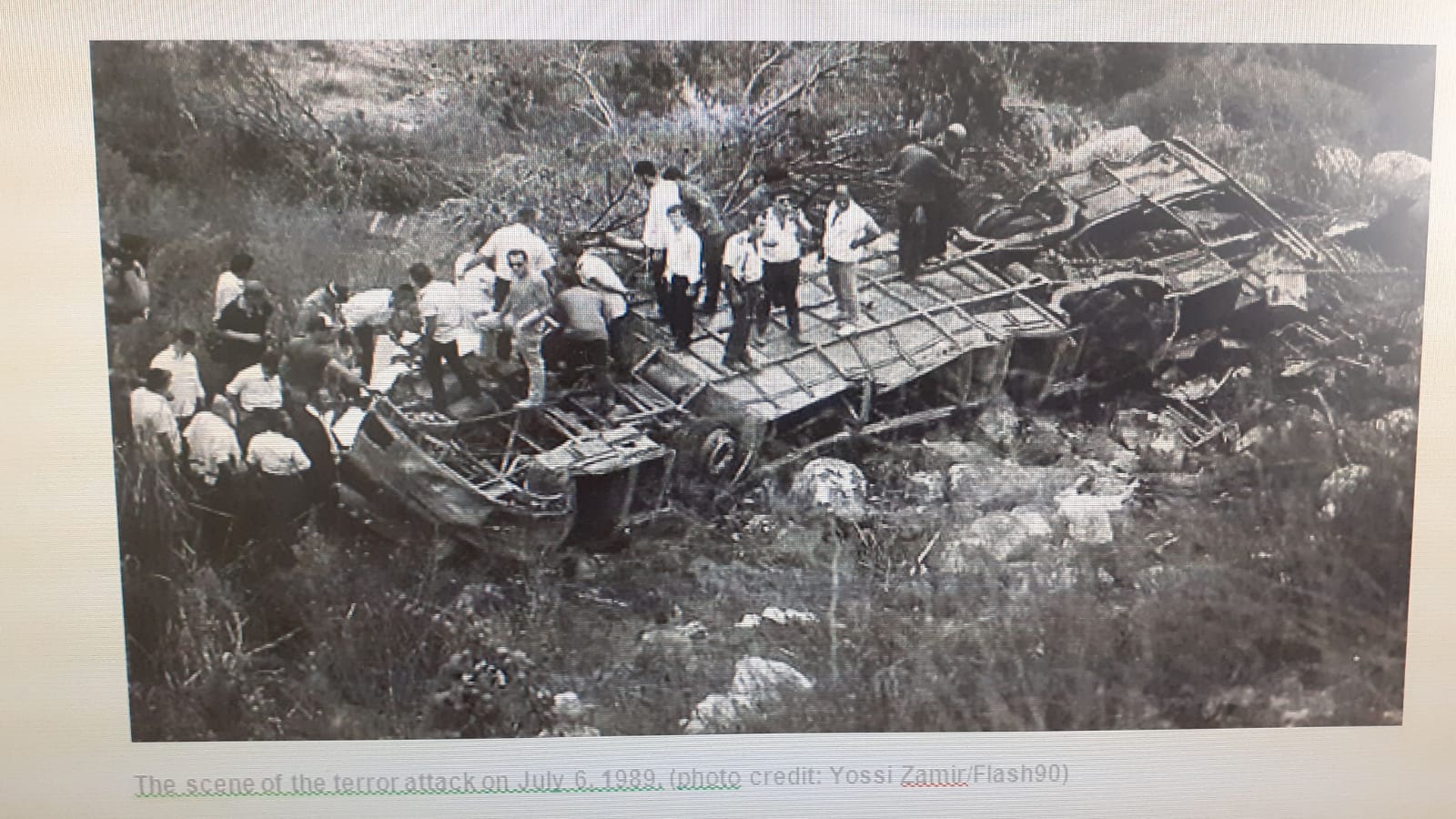 Taking this a step further, the 9/11 attackers first needed to learn how to fly a plane, and so it appears many of them learned in a US flight school. Then when the time was right, they used their knowledge gained from a US flight school, and carried out their attack with US airplanes owned by US corporations which meant that its shareholders had part ownership in all of those planes.

The Bus 405 attack has been described as the first Palestinian suicide attack to have taken place, despite the fact that the attacker survived. The bus was owned and operated by Israeli bus company Egged. Since that time, many other attacks have taken place in Israel where the terrorist drives a vehicle with the sole purpose of mowing down Israelis anywhere and everywhere possible – bus stops, train stations, Army bases and the list goes on and on.

In addition, there have been similar attacks throughout the world, again with the sole purpose of running over as many innocent people as possible to achieve the same ultimate results.

It does not seem to matter to the terrorist how he or she gets the job done, just as long as the target is hit. In other words, the terrorist has little regard for his or her life, so the same holds true for the others he or she kills or injures.

How ZAKA Began And Yehuda Meshi-Zahav

Founded in 1995 by Yehuda Meshi-Zahav, ZAKA is Israel’s dominant non-governmental rescue and recovery organization, with over 3,000 volunteers deployed around the country, on call 24/7 to respond to any terror attack, disaster or accident immediately, professionally and with the necessary equipment. ZAKA, a civilian volunteer organization with sole responsibility in Israel for dealing with incidents of unnatural death, works in close cooperation with all the emergency services and security forces.

The seeds of the ZAKA organization were sown in 1989, when then-yeshiva student Yehuda Meshi-Zahav and his colleagues rushed to assist at the scene of the 405 bus terror attack in which 17 people were killed and scores injured. For the next six years, Meshi-Zahav headed a group of volunteers who overcame the horror of terror attacks to recover human remains and ensure a proper burial in accordance with Jewish law.

Eli And Yehudah Were In The Same Place At The Same Time; Was This G-d’s Plan?

Both Eli and Yehudah were determined to help any way possible, and from this same experience, it gave them enough courage to begin organizations which have become instrumental in the fight against terrorism and looking after the victims of terrorist attacks.

Looking at it another way, both men have the name Yehudah in common. Since G-d’s name is contained in the name Yehudah, then it seems logical to look at this more closely to see if any further clues exist.

Perhaps if we include the name of the founder of Lianado Hospital, The  Klausenberg Rebbe (Rabbi Yekutiel Yehudah Halberstam, of righteous memory), who made a promise to G-d to establish a hospital if he made it through the Holocaust, then maybe we can make a reasonable assumption that it was not by chance these three men had to go through these terrible experiences. Because that gave them the courage to do something for Israel and the world as a whole, that might never had started if they all had not been involved in those incidents.

The result today is amazing because now Israel and the world have the benefit of a vast medical system and rescue service for emergencies and terrorist attacks.

But was it by chance that both Eli and Yehudah were volunteering together at this horrible attack? That is a question only G-d can answer, but we know nothing in this world happens by chance, and I firmly believe that G-d is with us all the time, especially when it comes to Eretz Yisrael. More about this in my next Blog.

In the year 2014 (5774) the bodies of three abducted Yeshiva students Naftali Frenkel, Gil-Ad Sha’er and Eyal Yifrah were discovered by the IDF near Hevron

At that time, a TOI article described what had happened, which can be found at the following link-

According to the article, IDF Chief of General Staff Benny Gantz was in the Halhul area, overseeing the ongoing operation.

The three Israeli teenagers had been killed soon after their abduction, and the bodies were apparently disposed of hurriedly. The bodies were not in a good condition when they were found, Channel 2 said. “It was a harrowing sight.”

This provides further proof that these terrorists had only one purpose, and that is to kill their victims causing them to suffer in the worst possible way.

If Israel would have done the same to the terrorist who commandeered Bus 405, then he would most certainly have been killed on the spot. Instead, the terrorist was sent to an Israeli hospital and treated for his injuries. This eventually led to his release as part of the Gilad Shalit prisoner exchange.

The Gilad Shalit prisoner exchange followed a 2011 agreement between Israel and Hamas to release Israeli soldier Gilad Shalit in exchange for 1,027 prisoners. Of that amount, 280 were sentenced to life in prison for planning and perpetrating various attacks against Israeli targets. The prisoners released under the deal were collectively responsible for the killing of 569 Israelis.

In a December 27, 2012 TOI Article written by Joshua Davidovich, it describes how thieves dismantled  a large monument dedicated to the victims of the attack.

In the article, it says –

Uzi Tzerafi, whose wife Miriam was killed in the attack, said there should be a national outcry over the theft. “It took me right back to the tragedy,” he told Israel Hayom. “I don’t understand how somebody could do something so immoral.”

Our son Dani, who took the picture at our son’s Bris in Rechovot appearing in my previous Blog, married into the family of victim Miriam Tzerafi.  Miriam was Dani’s wife’s aunt.

Since Dani’s marriage, I can confirm Miriam’s family are all very supportive of each other, which has been a bonus for our family as well to have become part of such a special family.  I can just imagine how close they were to Miriam and how difficult it must have been on that fateful day when the attack took place.

I have met many of their family at all of the simchas that have taken place and I also met Miriam’s sister Ruchama Raz, who has become known as a very popular Israeli singer over the years. I understand Ruchama sang songs devoted to the memory of Miriam.

Coming from Minnesota’s Fifth District to actually become acquainted with a family of a terrorist victim has taught me plenty. I am an eye witness to the strength the Israeli’s have no matter what situation they find themselves in. It’s an important lesson to learn, and I have not stopped learning from these experiences.

The most important lesson I have learned is that no matter what difficulties Hashem sends our way, we should have full trust in G-d that he is still in full control.

It makes me proud to be a Jew living here in Israel and confirms many times over my faith in Hashem.