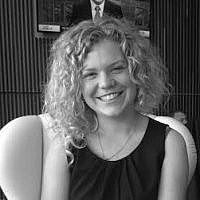 The Blogs
Jessica Gittel Cornish
Apply for a Blog
Advertisement
Please note that the posts on The Blogs are contributed by third parties. The opinions, facts and any media content in them are presented solely by the authors, and neither The Times of Israel nor its partners assume any responsibility for them. Please contact us in case of abuse. In case of abuse,
Report this post.

I began my university career in 2013, not knowing anyone on campus. I wanted to make an effort to meet like-minded people and decided to sign up for the on campus Labor Club. Before I knew it I found myself involved in the world of student politics, and within a few months I took on an executive role on the university student union. Unbeknownst to me, the higher powers in student politics saw me as an easy pushover, and loyal worker of the left, which for the most part I was. This all changed during July/August 2014, when tension between Gaza and Israel erupted into what is now known as Operation Cast Lead.

Suddenly, the campus was filled with pro-Palestinian rallies, posters proclaiming in no in uncertain terms that Israel is a terrorist state and calling for students to stand with their Palestinian brothers. Hamas chants reverberated through the air, and a large painted banner reading “Palestine will be from the river to the sea” hung above the library.

It turns out that at my university, there is only black and white. Good and bad. In this case Israel was bad and Gaza was good. The next student union meeting was rapidly approaching, and it was my responsibility to compile all the motions submitted for council. A long-winded motion was submitted by the Socialist Alternative explaining that Israel was guilty of ethnic cleansing and genocide of the Palestinian people. They argued that as a union, we must strongly condemn Israel. None of this was particularly surprising, considering that the same union had adopted a BDS motion two years previously.

I calmly rebutted their highly emotive and disjointed motion. Moreover, I proposed an amendment explaining that the student union should be against all forms of violence, and that both Israelis and Palestinians deserved to live a life in peace free from conflict. This amendment was not accepted.

Two other members of student council at the meeting supported my argument, and agreed that the current conflict did not constitute ethnic cleansing or genocide. Beyond this, we also raised the question of whether a student union in the outskirts of Melbourne should be taking a stance on such a complicated matter. A vote was finally called, and their motion was defeated.

I arrived to campus the next day to find my photograph and name plastered on the walls. They also made sure to include the name of my two friends who supported me at the student council meeting. The headline read “Labor Party Students Support Genocide of Palestinians.” The posters also included a mobile number to call if people wanted to join the “fight against on campus Zionists.”

As I was digesting all that had transpired in a few short days, I could only image what my German great grandmother would have thought of those posters had she still been alive. She was a woman who escaped Nazi Germany, losing every member of her immediate family to ethnic cleansing and genocide.

My mates in the Labor Left party faction did not quite understand my anger at the posters. I was angry, scared and frustrated all at the same time. I wanted an apology from any one who had anything to do with the posters, and I wanted those people suspended from the university. My colleagues and friends at the union told me that yes the posters were bad, but I was being unreasonable. I should not expect to receive an apology; it wasn’t that bad, and they discouraged me from reporting it to the university.  According to them, the best course of action to take was to be silent, ignore the hundreds of posters that kept getting slapped on to the walls of my university and hope that it will also just fade in to the darkness.

This time I refused to keep my head down and wait for it to blow over. As the only Jewish student on council and elected representative of the student union I didn’t want those behind the smear campaign against me to get away with this. They had crossed many red lines. Over the next six weeks, as events in the Middle East escalated, weekly rallies entitled “We are All Palestinians” continued with calls to “create an intifada on campus against the Zionists”. I was also verbally abused several times on campus and called a ‘Zionist piece of shit’ and a pig.

Bureaucracy is a long and uninspired process, yet the university eventually investigated the case, and at least one student was suspended. I never got my apology, and am positive that I never will.

These days, standing up for Israel is unfortunately a complicated decision to make. Standing up for Israel on my campus, in the small suburb of Bundoora, with a minority Jewish student population changed my life. It made me re-evaluate my friendships, opinions, and expectations of campus politics. It also clearly highlighted the widespread double standards people have with Israel. At the end of the day, whether Socialist Alternative’s motion was accepted or not it really made no difference. It would never have changed the political climate in the Middle East, nor helped the Palestinian people. Despite this, I didn’t want another hastily planned and insidious anti-Israel motion to be accepted and championed in my work place and university. I wanted my student union colleagues to understand that life in the Middle East is not so black and white, and I wanted myself and others to feel safe to be Jewish and proud of Israel.

The whole process was extremely tiring and taxing emotionally, however, I also learned invaluable lessons about politics and people, and forged new connections with wonderful supporters and members of parliament within the Melbourne Jewish community. I also challenged people to try and think about the situation in Israel, rather than just accept the far left’s hollow and narrow view of Israel. If you feel something is important to say, then say it. I can’t guarantee what the outcome will be, but at least you tried and were true to yourself. University is s great time to challenge your beliefs, have new experiences and meet new people.