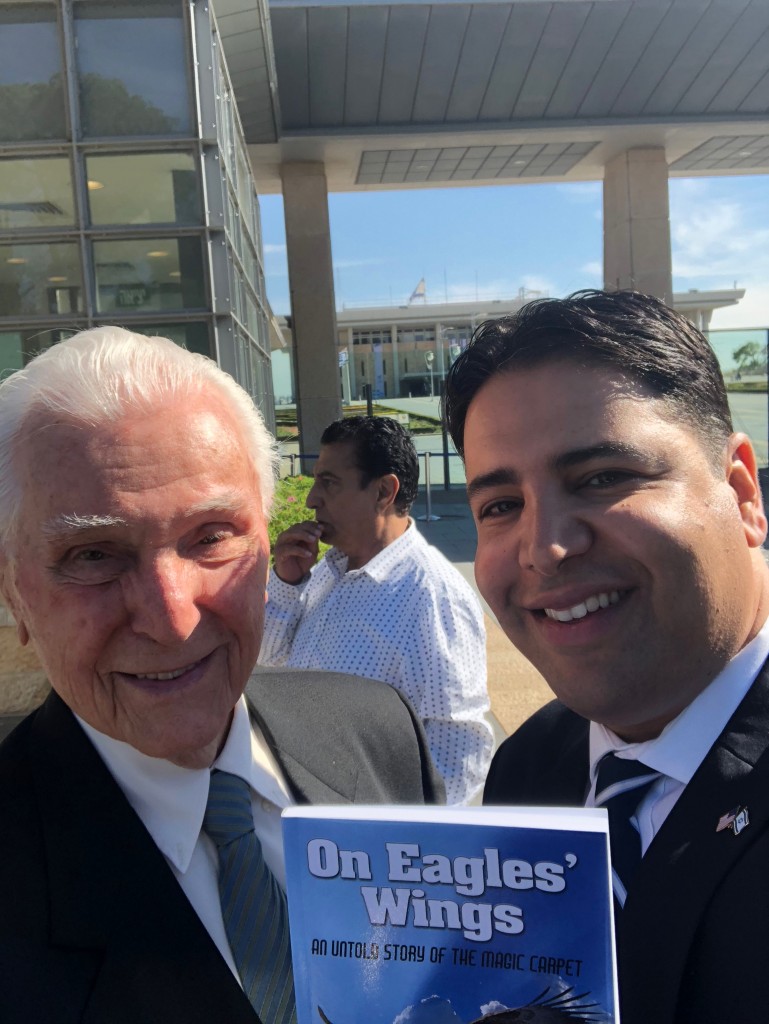 Capt. Elgen Long with his memoir on his visit to Israel’s Parliament, the Knesset

“Taste what?” asked the tall elderly gentlemen, standing in front of her.

“That chocolate I was given. For fear of flying, you know. I was a young girl then, one who’d never seen an airplane. I can still taste it in my mouth, even now, as I am standing here with you” she said with a trembling voice, as she closed her eyes and looked straight at him.

Such was the exchange between Ret. Capt. Elgen Long, formerly of Alaska Airlines, and one of the women who arrived on board those “Wings of Eagles” back home to Israel, soon after it’s re-establishment.

It was during those dark nights in 1949, that Capt. Long, together with the “Iron Men” crew, was flying to Israel on board the Alaska Airlines plane, carrying hundreds of Yemenite Jews. Those Jewish refugees made their way through the desert to reach Aden, then under British rule, to escape the horrors they had left behind. As Israel’s rebirth was announced, they had found themselves in grave danger and under cruel attacks by their Arab neighbors. For them, the perilous journey through the treacherous desert sands was their only chance for life, to survive. There they met Long and his friends, who bore them on Eagles’ Wings and carried them far, to their ancestral homeland.

As the flight first arrived in Israel, Elgen tells with glistening eyes, they were forced to land in complete darkness, as the War of Independence was raging outside. As they touched the ground and were heading for a stop on the runway, they noticed an army car making its way towards them. They were hoping it was the Israel Defense Forces, as no one had communicated with them on the radio before (again, it was war time). The Captain opened his window to let the soldiers know: “we have Jewish refugees on board”. The soldiers quickly boarded the plane to inspect and clear it, and as the last of them was heading out, he looked behind at the “Iron Men” and said: “It was a good thing you have done”.

Last week, many decades after their heroic journey, Elgen landed in Israel again. This time not at Lydda Airport, which saw only one airplane coming and going (their own Alaska Airlines), but rather Ben Gurion International Airport in Tel Aviv, through whose gates millions of people have come and gone over the years. StandWithUs, dedicated to the mission of supporting Israel and sharing her incredible story around the world, together with our friends at the Yemenite Cultural Association in Israel led by Dr. Yigal Ben-Shalom, joined hands to make this Homecoming of Hero a reality.

Together we went up and down the beautiful Land of Israel. We visited at one of Israel’s Air Force Bases, where Elgen met and spoke with incredible young men and women, many of Yemenite descent, with whom he shares the love of flying. He saw Tel Aviv, Beer-Sheba and Jerusalem, witnessed a country thriving, prospering, developing and continuously growing. In his eyes you could see a glow, a joy of.a parent whose children did something right. He was amazed by just how far Israel has gone from those early days of the State. Elgen also got a chance to visit the grave of his good friend, Pilot Wayne Peake, who volunteered to fight for Israel during the War of Independence and chose to be buried in Israel, a country with whose people he connected deeply.

But most importantly, more than anything else, Elgen came back to see them, those whom he had brought to Israel on those long flights. What had become of them? He wondered over the years. What have they done with their lives? Do they have children and big families today? He cared for them, and loved them, and they loved him back, more than one could ever imagine. At the community events, hosted by the Yemenite Cultural Association, he was flooded with passion, and hugs, with many people waiting in line to see him, shake his hand, say thank you and give him a hug. “Hakarat Hatuv“, a deep sense of gratitude, is a foundation of our Jewish tradition. Those people deeply appreciated Elgen’s courage and care, and together with their children and grandchildren, they came to say THANK YOU, “Toda Raba” in Hebrew, for making it all possible. For making us all possible.

Israel today faces many challenges, internal and external. It is easy — all too easy — to get lost in the political chatter and diplomatic debacles. Seeing Israel through Elgen’s eyes was a reminder for what Israel truly is: a modern day miracle, an inspiration leading to the realization of a dream.

As we parted ways at the end of the tour, Elgen looked at me and said: “Now I truly understand just how good was that thing that we had done”. 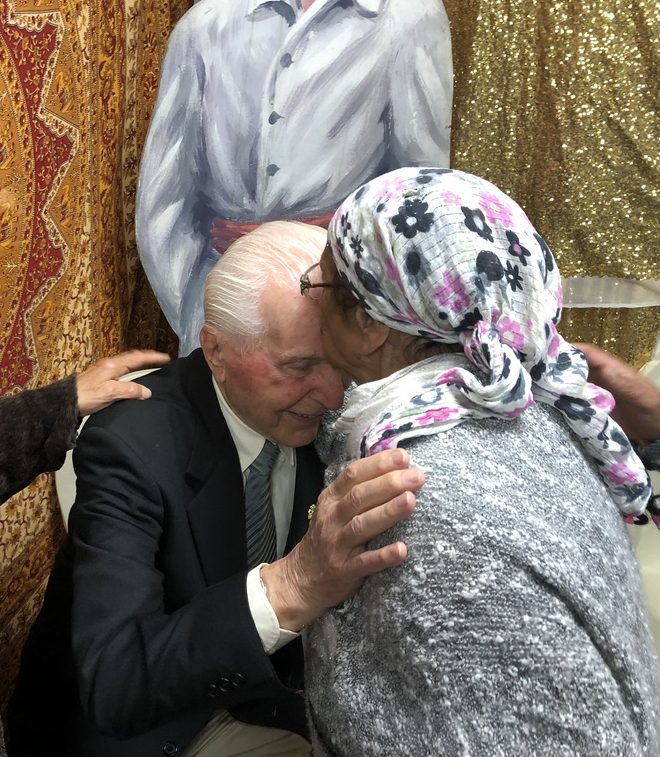 Elgen with a Yemenite Jewish woman he had brought home to Israel
About the Author
Speaker, Author, JBS Senior Vice President. Formerly Israel's Consul for Media Affairs in NY and diplomat at Israel's Foreign Ministry. Thankful for every day. Hopeful for the future.
Comments