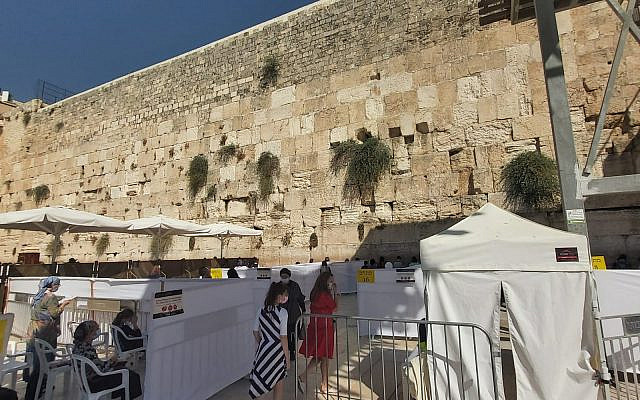 The Israeli government has approved a further easing of coronavirus restrictions on employers and employees, as Covid infection levels continue to drop, due to the rise in vaccinations. Workplace gymnasiums, sit-in restaurants and bars and attending professional conferences, are among some of the restrictions lifted this week.

Israelis who have found themselves stranded abroad for the past few weeks or in some cases, months, are now on their way back to Israel and will be in time to vote in next Tuesday’s general election.

But amongst the celebration of Israeli success, another double coronavirus tragedy occurred this week. Shuruq Jubran, a 23-year-old woman from the Arab Israeli town of Jisr az-Zarqa in the north, died last Monday due to complications from the coronavirus, three weeks after giving birth. She had been treated at the Hillel Yaffe Medical Center in Hadera, since giving birth to her first child.

Shuruq contracted COVID-19 at the end of her pregnancy and was not able to see her daughter after the delivery. The baby, however, was said to be in good condition.

Just 10 days earlier, her sister, 31-year-old Amna Kahwaji, died under nearly identical circumstances, after giving birth to her first child a week earlier, several weeks after contracting the coronavirus. Both women were not vaccinated for Covid.

Mu’awiya Kabha, who leads the Health Ministry’s outreach to Arab communities, told Channel 12 News that the tragic deaths were devastating reminders of how important it is for all pregnant women to get vaccinated.

Army Radio reported Tuesday that another mother had lost her unborn twins due to the coronavirus. She was said to be hospitalized in moderate condition and had apparently not been vaccinated.

The report on Army Radio said that 40 pregnant women are currently hospitalized due to complications of the virus, none of whom are vaccinated.

The head of the public health services in the health ministry Dr. Sharon Elroy-Price says the coronavirus pandemic is not behind us and the infection is still a danger in Israel. Speaking on Kan radio, she said about 80% of the people hospitalized with coronavirus are not vaccinated.

According to health ministry data released as of last Tuesday morning, Israel had 27,040 active cases of the coronavirus, with 602 people in serious condition, 211 or them on ventilators.

The death toll stood at 6,037. The country’s vaccination campaign has so far seen about 5.2 million citizens receive at least one dose of a COVID vaccine, with around 4.3 million also receiving the second shot. Israel has a population of about 9.3 million people.

Those Israelis who have received both shots have to present their “Green Pass” document, in line with government “purple badge” regulations to gain entry to most venues, as video emerges of life getting back to normal, begins to take shape.

But there is still a number of Israelis who refuse to take the vaccine citing all kinds of danger. They are extremely vocal on social media about how their human rights have being removed, because they cannot gain entry to venues or leave the country.

Israel has so far paid 2.6 billion shekels for the coronavirus vaccines, according to a treasury representative, during deliberations at a Knesset Finance Committee meeting.

The message is quite simple. Take the vaccine along with the second shot and receive a Green Pass. Israel is particularly worried about the British variant of mutations reaching the country, but Pesach for Israelis will be the big test.

If the rate of infection in Israel remains low after Pesach, the next stage will be to allow foreign tourists into the country from so-called approved countries.