The Blogs
Daniel M. Cohen
Apply for a Blog
Please note that the posts on The Blogs are contributed by third parties. The opinions, facts and any media content in them are presented solely by the authors, and neither The Times of Israel nor its partners assume any responsibility for them. Please contact us in case of abuse. In case of abuse,
Report this post.

One of the great privileges of the rabbinate is the opportunity to teach the Jewish leaders of tomorrow and play some small role in their learning and growth.

One of the great gifts of the rabbinate is seeing those young people grow into amazing young adults whose understanding, commitment and passion is boundless.

Numerous young people from my congregation were in Israel this summer when the missiles began flying. One of them shared her experience with me yesterday. Her words inspired me. She expressed the impact of her time in Israel beautifully. And as I read her piece I was struck that this summer’s conflict was only a small part of the overall experience she had. By relating her time in Israel this summer in this manner she helped remind me that we need to look past the missiles and the conflict. By so doing we can be reminded that Israel continues to be an inspiration for us and for the next generation.

I am grateful to Ashley Rose for permitting me to share her words in this space.

The Gift of Israel- by Ashley Rose 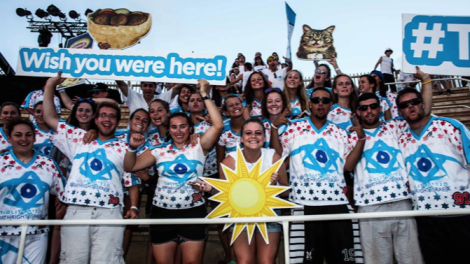 This Summer I was given a life changing opportunity to be part of a grassroots effort to help grow the sport of lacrosse in Israel. I traveled with an incredibly passionate, talented, and motivated group of athletes, all with the same goal of making lacrosse the national sport of Israel. However far away our homes may be, Israel will forever be in our hearts. Together, we became apart of something so much bigger than ourselves. 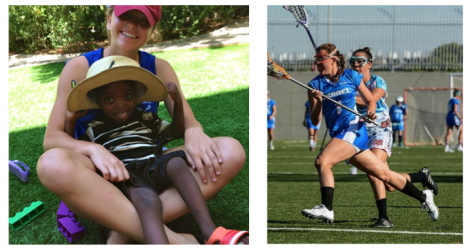 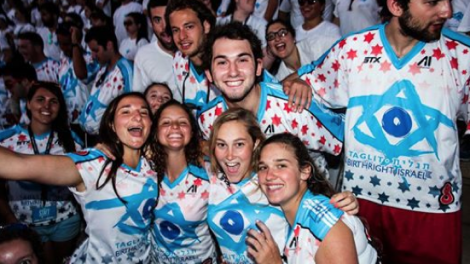 There was great irony in this experience. I went into the summer hoping to change the lives of the children with whom I worked, the reality is that they changed mine. Playing and coaching lacrosse in Israel enabled me to see the world in a new way. I realized you don’t need much. Our individual needs were set aside while we focused on the needs of others, on the task at hand, and on what was happening around us. I believe I speak for most of us when I say we will carry this feeling of purpose and passion with us for years to come – and I know most of us will be back.

I began my summer on a 10 day Birthright trip. I, along with 39 other college lacrosse players, became the first Birthright/USA All-Star Lacrosse Team. With a cumulative 2,000+ pounds of donated equipment, we were ready to go! We played three exhibition games against the Israeli National Teams in an effort to gain momentum for this incredible sport. 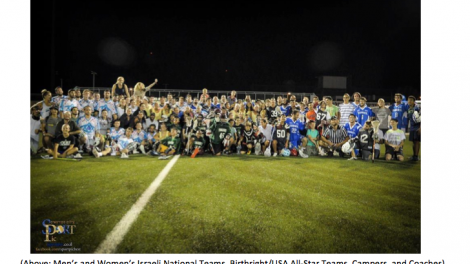 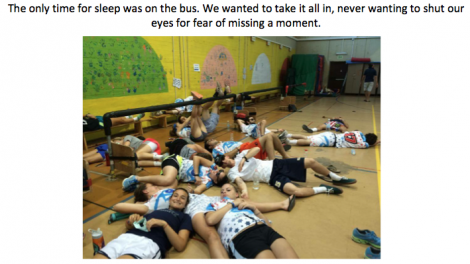 The activities were endless on our Birthright trip. When we weren’t playing lacrosse, we were rafting down the Jordan River, exploring the Jewish Quarter, praying at the Kotel (Western Wall), learning about the horrors of the Holocaust at Yad Vashem, attending the Mega Event Birthright Concert (which the prime minister, Benjamin Netanyahu, also attended), riding camels, hiking Masada, visiting Mount Herzl Military Cemetery, holding Shabbat services on the beach, spending the day at Save a Child’s Heart, coming together to support Sticks for Kids, and so much more.

Several of the activities listed above, had a special impact on my life. The first experience was at the Western Wall. As a group, we went to the Kotel on a Saturday night. We gathered around sunset right outside the entrance to the wall. Together we were instructed “stand in a circle, so that you are behind one another looking at the back of someone’s head, and put your hands on their shoulders, and start massaging.” I thought it was a unique spin for the start of a Havdalah service. It also made perfect sense because we were so sore from our earlier lacrosse game. After awhile we joined arm in arm in song and in prayer. For many, it was their first time in Israel. For all of us, it was our first time there together. I found that special moments like this were a daily occurrence while in Israel with both the Birthright group, and with Israel Lacrosse Interns. Crying started to become a regular occurrence, leading many to think I was probably emotionally unstable. Probably true, so I digress. All 40 of us left a note, or a blessing, in the wall before leaving. On the way back, Julia Szafman (my mentor while on the Internship) and I, were standing outside a circle of women who were a part of an activist group called “Women of the Wall”. They were huddled together and chanting what translated into “We are not afraid to have our voices heard”. One woman invited Julia and me to join, and without hesitation Julia said to me “Yalla!” which means lets go! A few other members of our Birthright trip joined, and together we were welcomed with open arms by these complete strangers. Chanting and singing we felt endless pride for our country. We were shh’d countless times, and even had a chair thrown at us in an effort to shut us up. It didn’t work. It was such a liberating and spiritual experience, bringing many to tears (obviously, I was one of them).

Mount Herzl Military Cemetery was another beyond touching experience. I will always remember that our group was sitting on a grassy plot of land, and were told that the next time we visit it would no longer be there, because gravestones will have taken its place. We were joined by five Israeli Soldiers: Nitay Ben Baroh, Omer Asher, Tal Goldner, Aviel Mizrachi, and Alon Sulimani. Rather than tolerating our differences, they embraced them. These Israeli’s helped introduce us to the Jewish culture, and to appreciate Israel as our homeland. I will forever be thankful. Upon leaving, our group joined together to sing with pride the Israeli National Anthem. The anthem, Ha Tivkah, translates to “The Hope”. It was an inspiration to see the Israeli Soldiers sing with so much hope and love for Israel.

Another wonderful experience was our Sticks for Kids event. All 40 college lacrosse players participated in this event. Kids from all over came by. We ran clinics, signed autographs, and shared our love for lacrosse and our love for Israel. It was exhilarating. We were all so pumped!

During the event we heard the sound of a rocket being intercepted by the Iron Dome. This was the beginning of the all to familiar sound of sirens and rockets. As we became a part of the reality of living in Israel – the life our campers were living daily, we dug in with even more determination.

We also had the opportunity to spend a day at Save a Child’s Heart Headquarters. These beautiful children were preparing for, or recovering from, heart surgery. I remember taking a moment (being emotional again, obviously) and looking around to see all 40 college lacrosse players on the ground laughing and playing with kids of all ages. It was an unparalleled realization of how a little love can make a huge difference. However, in our case we had a ton of love. Even the language barrier could not stop us from connecting. Through lacrosse, Leggos, dance moves, simple laughter, or lots of hugs, we were able to connect on a deeper level than language could have brought us. 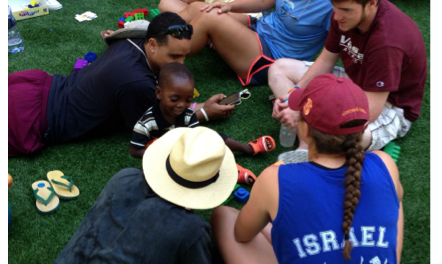 I will never forget the third time the Women’s Birthright/USA All-Star team played the Women’s Israeli National Team. We shared the same locker room. Although it may have been some of the women’s first time meeting, the second the song “Rather Be” came on, we all danced together as if we were on the same team. In many ways we were. We were all in Israel to grow the game and spread the love for lacrosse…and now we are all praying for peace.

Saying goodbye to my Birthright group was beyond difficult (obviously I was crying). The longest yet shortest ten days of my life. Israel lacrosse will always be in our hearts, and I have no doubt we will cross paths again in our futures. The last night of Taglit, we ate dinner at the Lacrosse Embassy in Tel Aviv, meeting the Interns of Israel Lacrosse, as well as members of the National Teams; a perfect transition into my second half of my Israel experience – the Lacrosse Internship. 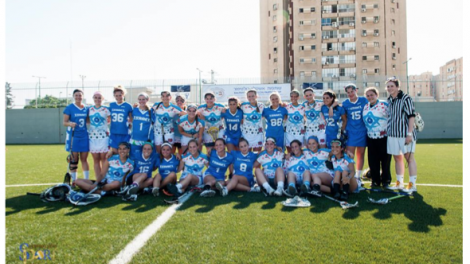 The first Friday night of the internship, all those that were in the Lacrosse Embassy gathered on the roof for Shabbat. Again, for some it was the first time meeting, but it did not feel that way. A few of us later went to the beach for a Shabbat service where we were welcomed (literally) with open arms. This was not a coincidence, it was a reoccurring theme I found in the Jewish culture to welcome in others, not just tolerate.

I was living in Ashkelon for my first two weeks of the internship. While working the camps we were invited over to two of our camper’s homes. Without hesitation, and with (for some) little more than the bare necessities, they opened their homes to all of us. Taking the time to have a home cooked meal, without any technology, at a leisurely pace, and in the presence of good company, seemed to be second nature to the Israelis that I encountered.

During my time working with this incredible program, Israel Lacrosse held the largest lacrosse camp in the Middle East. Located only miles from the Gaza strip, we heard rocket sirens go off far too often. Our lacrosse camps worked as coexistent programs. Arab and Israeli children played together as one. We were coaching a generation that has the ability and obligation to shape the character and mindset of so many Israeli’s and Arabs. Kids of different beliefs were playing together. The only difference on the field was the level of skill, and it was amazing to watch them help one another improve. Regardless of language we found a connection – that connection was lacrosse.

Since being home, on July 28th I met up with several Israel Lacrosse interns in NYC to support Israel at a rally surrounded by 10,000+ supporters. 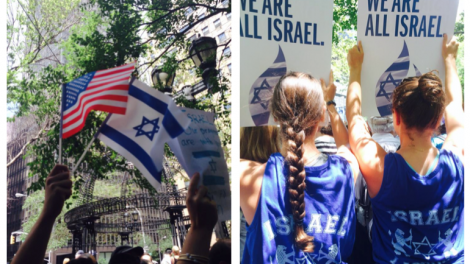 On August 11th, Israel Lacrosse held a U16 Great Britain team clinic for the Macabbi games in New Jersey. The Israel Lacrosse community is so strong, and I am so honored to be apart of it.

Throughout this entire experience we were overcome with pride for Israel, for our sport, and for each other. Together, once again we became apart of something larger than ourselves.

Israel truly is a gift, and my hope is that sharing my experience will inspire others to get involved in helping this wonderful state of Israel to not just survive, but thrive! I am so grateful for the amazing friends, campers, and community that I’ve become apart of, and so excited for the endless adventures I know are ahead! 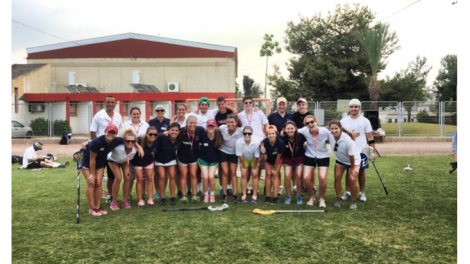 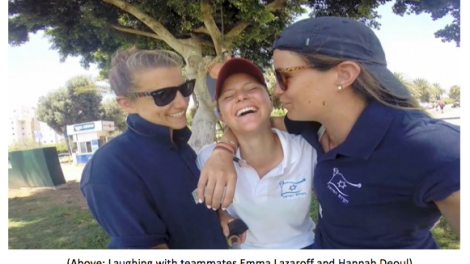 About the Author
Rabbi Daniel Cohen was ordained in 1993 by the HUC-JIR and has served Temple Sharey Tefilo-Israel since 1993. An avid technology geek, for fun he writes for the tech blog Gear Diary.
Comments