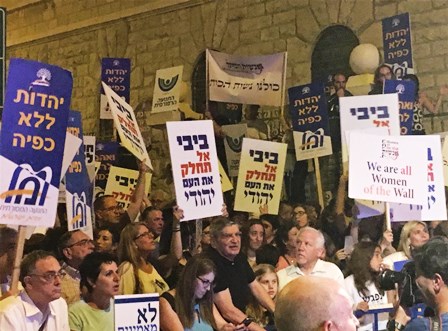 Israelis rallying for Jewish unity and freedom of religion, July 1, 2017

Excerpted from Futurpedia, the online encyclopedia of tomorrow:

The modern State of Israel, for 70 years hailed as the only democracy in the Middle East and admired for the resourcefulness that allowed it to survive despite myriad threats to its existence, eventually succumbed to cancerous malignancies that sapped it of the energy and will necessary to endure. While historians continue to debate the precise cause of its downfall, they are in agreement that it was not the hostility of Israel’s Arab neighbors that brought about its destruction but rather internal discord that prevented it from fulfilling its promise to be the nation-state of the entire Jewish people.

Analysts cite the summer of 2017 as the tipping point beyond which the continued decline of the Third Jewish Commonwealth became inevitable. Two millennia after the destruction of the Second Temple, they contend, the Jewish people proved themselves incapable of internalizing the lessons of history and the teachings of their tradition, which ascribed their long and bitter exile that began in 70 C.E. to the internecine baseless hatred rampant at the time.

Commentators note with irony that it was in the weeks leading up to Tisha b’Av – the season dedicated to reflection on the reasons for the destruction of the First and Second Temples – that decisions were made that resulted in the unraveling of the social fabric of Israeli society and the tearing asunder of the covenant of solidarity that had long existed between Diaspora Jewry and the Jewish state.

They point to two fateful steps taken by Israel’s government on June 25, 2017. The first was to freeze implementation of an agreement reached 18 months earlier to create a pluralistic prayer space at the Western Wall that would have granted recognition to the Reform and Conservative movements. The second was to advance legislation that would enshrine in law the monopoly of the ultra-Orthodox Chief Rabbinate over matters of personal status, rendering its refusal to recognize conversions performed under the auspices of the modern Orthodox, Conservative and Reform movements immune even to decisions of the Supreme Court.

In a demonstration held on July 1, thousands took to the streets to protest these measures, urging their reversal for the sake of Jewish unity and the security of the Jewish state. As important as it was to maintain the loyalty of Diaspora Jewry as a strategic asset of the State of Israel, speakers at the rally emphasized that it was no less crucial to ensure that Israeli society would be one in which democracy, freedom of religion, diversity, inclusivity and minority rights were all revered. They decried the absurdity of Israel being the only western country in which non-Orthodox rabbis were not recognized and in which a Jew could be prosecuted for worshiping in accordance with his or her custom. Their protestations came on the heels of legislation introduced into the Knesset that would make donning a prayer shawl by a woman at the Western Wall a crime punishable by imprisonment.

Concern was also expressed over Israel’s credibility.  If implementation of a decision reached after more than three years of painstaking negotiation could be postponed indefinitely, the question was raised as to how any world leader, Arab or otherwise, could be expected to take Israel’s word at face value. This perceived lack of integrity came at a particularly troubling time, as a study published only a few days before revealed an alarming deterioration in support for Israel among Jewish college students in the United States, as well as among millennials in general, women, Democrats, African-Americans and Latinos.  Shared values, the report noted, were crucial to any relationship. Consequently, the more Israel was perceived as being unfaithful to values fundamental to the American ethic, the greater the disaffection among those it had previously been able to count on for backing.

That disaffection was accelerated by a number of other phenomena occurring during the same period. Ultra-Orthodox extremists were burning effigies of Israeli soldiers at Lag b’Omer bonfires in protest of their accountability to the Israel Defense Forces, however negligible that was. Hotels were denying their guests access to Torah scrolls for use in egalitarian services due to a fear of losing their kashrut certification. Non-Orthodox conversion candidates were being denied access to state-funded ritual baths. And the chief rabbinate was making it all but impossible to convert even under Orthodox supervision, leaving some 330,000 immigrants from the FSU and their more than 100,000 offspring in a perpetual state of identity limbo.

Unrestrained, these theocratic tendencies that had been encroaching on Israel’s political system for years resulted in the alienation of large segments of the Israeli public from the Jewish tradition and the estrangement of large segments of world Jewry from the Jewish state. It would only be a matter of time before the State of Israel, lacking the moral authority that was at the foundation of the Zionist idea, would collapse.

It is not too late, however, to avert the decree. Should the clarity of hindsight be applied by those charged with the responsibility for foresight, then it is this entry in Futurpedia that will be eradicated rather than the State of Israel and this page will have never been written. Which way things go depends on how many raise their voices and convince others to read the writing on the Wall.

About the Author
Dr. David Breakstone recently completed a term as deputy chair of the executive of The Jewish Agency for Israel. He previously served as deputy chair of the World Zionist Organization and conceptual architect and founding director of the Herzl Museum and Educational Center in Jerusalem. His latest venture is Israel ArchiTexts (www.IsraelArchiTexts.com), an enterprise promoting educational tourism and Israel engagement. He can be reached at breakstonedavid@gmail.com.
Comments