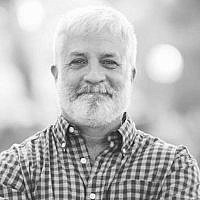 The Blogs
Rich Kirschen
Thoughtful, Caring and Effective Therapy
Apply for a Blog
Advertisement
Please note that the posts on The Blogs are contributed by third parties. The opinions, facts and any media content in them are presented solely by the authors, and neither The Times of Israel nor its partners assume any responsibility for them. Please contact us in case of abuse. In case of abuse,
Report this post.

I remember my first trip to Israel. It was 1978, I was fifteen years old on a program with USY, and I was made to wear an orange pointy hat. But that is not what made the biggest impression on me. More than Israel, more than the breathtaking landscape and even more than the incredible history, it was my Israeli peers who made a permanent indent on my psyche. And what impressed me most was the way they behaved and how different they were from my own American Immigrant Ashkenazi Jewish sensibility. These people were confident – but in a different way from what I had seen from my Jewish community growing up on Long Island, NY. And unlike my family they didn’t seem to show any traces of fear. In my house, fear wasn’t just an emotion, it was a value. We might have been living in fancy Woodmere, but the Cossacks were never far away or to quote my wife who describes my family’s approach to life best, “Why Wait to Panic!” And so, after that summer of buying T-shirts and collecting Coca-Cola bottles in Hebrew, I didn’t just want to move to Israel, I wanted to be Israeli. I wanted to be tan, muscular and above all not neurotic. I wanted to be like those Hebrew speaking super Jews who could maintain a steely silence and not talk all the time (unlike the author of this article). I wanted to speak in that deep manly voice which was so different than the Jewish men I knew growing up. The men in my family always seemed to have voices that contained rage and anger but lacked a certain sense of their own authority, which was something I did not see in Israelis.

What I didn’t understand at the time was that I was watching two different but very normative reactions to the common experience of trauma. As we know there are often four different responses to trauma: Fight, Flight, Freeze or Fawn. For my family who fled Galitziya after WWI and the Pogroms in Ukraine that followed (where 100,000 Jews were murdered from 1917-1921), their reaction was Flight. And that strategy has pretty much stayed with my family until this day. However, for Israelis there was a new Jewish strategy to trauma and that was Fight. What I didn’t realize the first time I was meeting Israelis, was that I was encountering a collision between two different Jewish strategies for survival. For the Israelis Jewish history had made a very strong case against the other strategies of Flight, Freeze and Fawn, and even more so after the Holocaust (especially with Freeze). In Israel the strategy was to Fight, and this infiltrated the socialization of every Israeli from kindergarten until the army. This doesn’t mean that my fellow Israelis were fundamentally different from me, but it is amazing to see the transformative power of the dominant culture and how it affected their behavior.

As someone who works with both young Jewish Americans and Israelis, I have seen firsthand their different reactions to trauma. As many of us know, there is a mental health crisis amongst young adults in the U.S; and I know only too well from my experience that this started well before Covid. It is as though young Americans have been “canaries in a coal mine,” and as their mental health challenges began to skyrocket (primarily through fear, anxiety, and depression) it was hard not to see this as a foreshadow of an America that was descending into crisis. And of course, the strategy for so many of them was in fact Flight. For many of these young people the outside world was too scary, the expectations too intense, and the slice of the American pie was growing smaller all the time. Their anxiety turned into an age-old pattern of Flight by fleeing the outside world and for many of them this was a flight back to the protection of their parents. Of course, this becomes a two-way street with panicked parents and their panicked adult children. Conversely, young Israelis join the army and learn to Fight. But this strategy too has its consequences when we see the numbers of young Israelis after the army who suffer terribly from PTSD. Essentially these two groups of young adults undergo diametrically opposed experiences. While American Jews are sent to college and become more sensitive, Israeli Jews are sent to the army and become less sensitive. But sometimes opposite strategies are surprisingly the same.

Strategies are helpful when navigating trauma but taken to their extreme they can turn into pathologies. And finding a middle ground between Fight vs. Flight reflexes is not easy. How do American Jews learn not to completely erase their anxiety and fear (read Flight) but rather turn down the dial on their response? After all anxiety is there to protect us and sometimes it is warranted. And of course, while the strategy of Fight is imperative for Israelis who are surrounded by enemies; we also see how this strategy has created an extremely aggressive society which doesn’t always think about the alternatives to Fight.

There is a lot of talk lately about the gap between Israeli and American Jews. But this is not only about politics, this is about something much deeper. It is about our internal psyches and strategies which have been shaped and molded by very different situations. The first time my intuitive Flight instincts met up with Israeli Fight instincts, I saw something that was missing from my own internal arsenal while navigating the wider world. And it was a new and exotic experience to see Jews behaving this way. But I think in truth Jewish communities on both sides of the ocean both possess and lack what the other has. Perhaps American Jews need more Fight and Israeli Jews need a little more Flight. Navigating between Anxiety and PTSD for American and Israeli Jews is not easy. In fact, our inability to truly listen and understand what the other side is going through is a critical deficit in our relationship. In addition to tourism, programs, and philanthropy it is now imperative to dive deep beneath the surface and begin to realize that if we value this complex but invaluable partnership, like all couples with problems, we need to see not only the content (read the issues of the day) but rather the dynamic that has developed between us. And if you can change the dynamic, you can save the relationship.

About the Author
Rich Kirschen is a Jerusalem-based American-Israeli psychotherapist who works with individuals, couples, and families, helping those who are struggling with anxiety, depression, low self-esteem, trauma, and addiction. He has worked with families for over thirty years and trained in Family Systems Therapy. In addition to training in Family Therapy he is a certified Cognitive Behavioral Therapist. A keen observer of Israel, Rich lectures both in Israel and abroad, offering a unique perspective into the psychological underpinnings of Israel and Israelis.