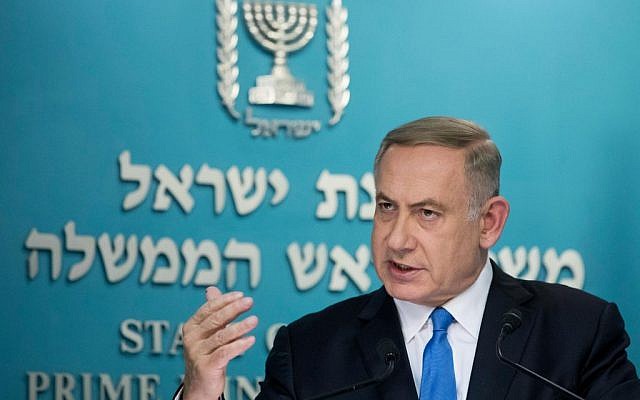 Benjamin Netanyahu in 2016 (via Jewish News)

It’s been a roller-coaster week for Israel and the Jewish world. Leaving aside the horrors of the shooting in Pittsburgh – at a place the Ashkenazi Chief Rabbi of Israel, David Lau, could not bring himself to describe as a synagogue – we have had interactions with Jordan, Abu Dhabi, and – worryingly – Brazil.

Looking first at Jordan, with which Israel signed its historic peace treaty in 1994, there were clear signs Jerusalem was caught on the hop by King Abdullah’s announcement that his kingdom would not extend a 25-year deal, which allows Israel to use two areas along the Jordanian border.

The land – Baquora in the north and Ghumar in the south – is mainly used by Israeli farmers, and Israel had been planning to negotiate an extension to the deal. The land agreement expires in 2019, but each country has to give a year’s notice if changes are to be made.

The king is under a great deal of internal pressure not to renew the deal. Who knows what will happen now after Israel – at Jordan’s request – sent its rescue workers and medical aid teams to help in the awful tragedy of Jordanian schoolchildren, caught in flash floods at the Dead Sea. Eighteen young people, out of a group of 37 on a day trip from their school, were swept away and died in the floods. And Israel did what it does best in such circumstances – it gave as much help as it could.

In the same week, Israel’s much-discussed behind-closed-doors relationships with other Arab countries sprang into the limelight, as Prime Minister Benjamin Netanyahu openly visited Oman and talked to its absolute ruler, Sultan Qaboos. Bibi (and, inevitably, his wife Sara), were accompanied by the head of Mossad on this trip.

Intriguing, at a minimum: Oman is a great ally of both Iran and Qatar, and the trip took place against the increasingly muddled messages coming out of Saudi Arabia and Turkey over the Khashoggi murder.

One thing is clear: Israel is carefully weighing up its position in a region where the tectonic shifts in power are sending odd signals.

And so we move on to Abu Dhabi, which had the power – as few others have had – to reduce Israeli Culture and Sports Minister Miri Regev to tears. The occasion was the unheard-of playing of Hatikivah, Israel’s national anthem, after judoka Sagi Muki won a gold medal at the Judo Federation’s Grand Slam competition in Abu Dhabi .

Last year, at the same event, Israel’s flag and national anthem were banned and, although Tal Flicker won a gold medal, he had to sing Hatikvah by himself.

So things are looking good, right? Wrong. Every time Israel looks as though it is on the right side of history, someone – and, to be fair, it is usually Bibi or Regev – comes out with something crass and idiotic. Two steps forward, 100 years back.

This time it was the usually reliable Knesset Speaker, Yuli-Yoel Edelstein. While most of the democratic world expressed nervous horror at the election of Brazil’s new hard-right president, Jair Bolsonaro, Edelstein, of whom I thought better, rushed in to welcome his election. “Bolsonaro is a true friend of the state of Israel… We look forward to your visit to Israel and wish you all the best!”

Oh, yes, a true friend. But one who is pro-gun, pro-torture, anti-immigrant, admirer of dictators. Everything, in other words, which Israel should profoundly reject.

Sometimes, I think, if the Israeli Government had one more brain cell, it would spontaneously combust.