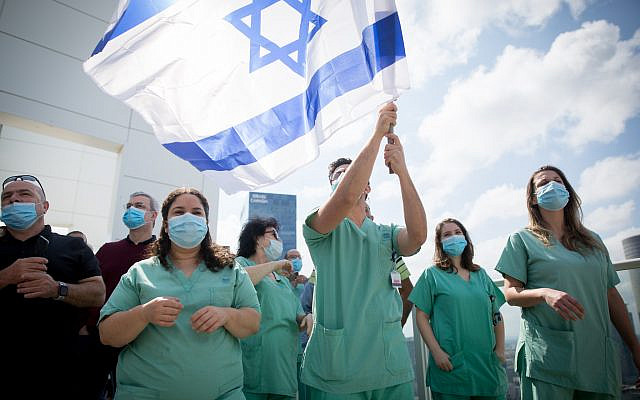 A 26-year-old man has become the youngest Israeli to die from COVID-19 related complications, health care workers at the Sheba Medical Center at Tel Hashomer confirmed yesterday. Oshri Asulin, from Kfar Saba, was one of the many new cases of infection that the country has seen since the start of June, in what the government describes as a worrying “second wave” of the virus.

More than 930 patients were diagnosed with COVID-19 in the first eight days of June – almost equal to the amount diagnosed throughout the entire month of May (1,186 people). The sudden growth in cases has forced the Israeli government to “pull the emergency brakes” on the easing of coronavirus related restrictions, in fear that the virus could take an even greater hold of the small nation and put unbearable pressure on its healthcare system.

On Monday the Corona Cabinet met and on hearing that there had been a near doubling of the rate of infection within the previous 10 days, decided not to reopen the country’s rail system, along with the lifting of several other restrictions.

Israel’s Arab Emergency Committee also announced that 48 new cases of coronavirus have been identified in the Arab community over the weekend – figures that do not include cities of mixed population or East Jerusalem. To date, Israel has experienced more than 19,000 coronavirus cases and 300 deaths – making it the 46th most affected country in the world, after Iraq and Panama. As of yesterday, the number of death cases remained 300 for the third consecutive day, while the number of patients in serious condition dropped from 35 to 33, out of 133 patients currently hospitalised across the country.

But with a near doubling of infected patients, with a “very steep increase in morbidity, the Corona Cabinet is scrambling to regain control over the virus.

“What we decided to do, first of all, is to hit the emergency brake,” Prime Minister Benjamin Netanyahu stated after the meeting. “We stopped all of the measures to ease restrictions that we were going to apply in the coming days.”

The cabinet has urged Israeli citizens to continue wearing masks in public, to maintain a two meter distance and to regularly wash hands and keep rigorous standards of hygiene. It has not, however, decided to shut down the country’s school system.

On Saturday, it was revealed by the Education Ministry that 493 citizens within the education system have tested positive for COVID-19, and that 25,821 are currently in preventative quarantine. To date, 177 education institutions have been closed due to confirmed cases, across both schools and kindergartens.

At around the same time, it was confirmed that at least three of Israeli Prime Minister Benjamin Netanyahu’s security detail have COVID-19. According to the statement released by his press office, the guards work at the prime minister’s home in West Jerusalem, but have had no close contact with the premier. Netanyahu was therefore not required to quarantine after the test, and an epidemiological investigation has been launched into the matter.

According to Israeli news site YNET, the Israeli government is in talks with Moderna Inc – a leading American biotech company focused on drug discovery and drug development – to buy the coronavirus vaccine it is developing. According to the company, Moderna has entered the final stages of testing for its three experimental coronavirus vaccines and is on track to successfully developing the world’s first. Meanwhile, six leading  Israeli companies and academics are working to invent effective inoculations against SARS-CoV-2; companies MigVax, IIBR, TransAlgae and Bar-Ilan University Faculty of Medicine scientists from Moshe Dessau’s Structural Biology of Infectious Diseases Lab among them.

At this stage, Israel’s updated COVID-19 regulations include the allowing of events of up to 250 people, with event halls now allowed to open for weddings and religious ceremonies, including bar and bat mitzvahs. The number of guests, however, will be limited to one guest per two square meters, and cannot exceed 250 people. Event companies and venue owners are also required to keep contact lists of all event goers and attendees for at least 20 days following events. Should any event attendee test positive in the event’s aftermath, they would need to provide this information to the Health Ministry.

Defense Minister Benny Gantz announced after Monday’s Covid-19 cabinet meeting that “as long as there is no dramatic exacerbation of the infection rate – there will be no withdrawal from the lifting of restrictions already granted.”

Netanyahu has urged his people to remain vigilant in the wake of a second wave of the coronavirus.

“I ask you, for our economy, for our health and for the lives of us all – please follow the rules,” he said.