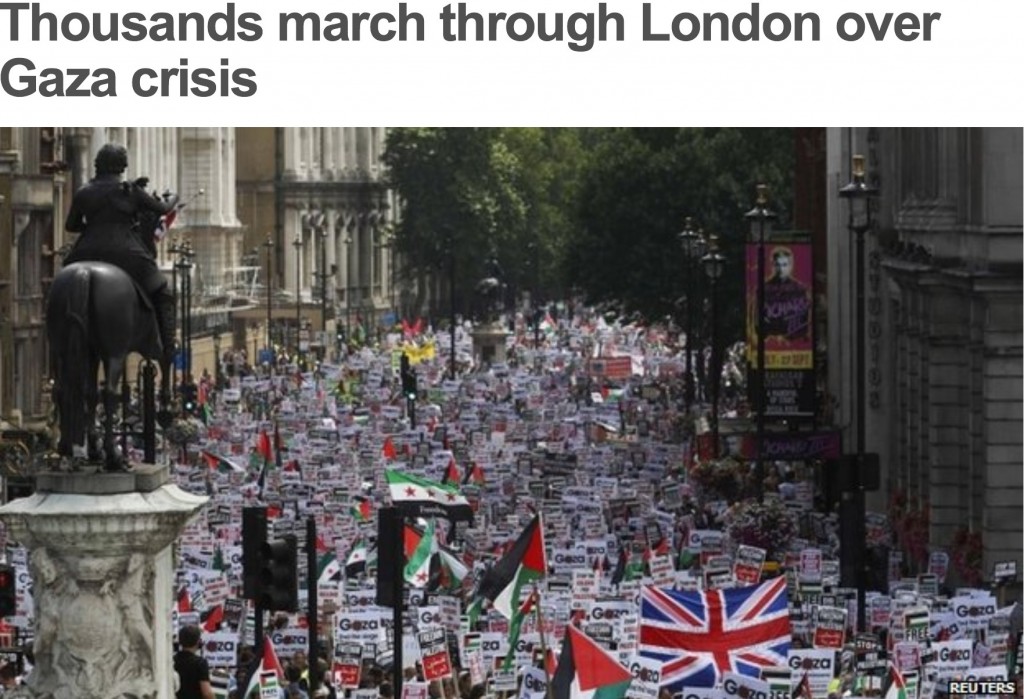 Meanwhile, in a parallel universe…

TEL AVIV, 2002 — Ever since the US and UK invaded Afghanistan on the claim it was fighting “terrorism”, outraged Israelis have been protesting their slaughter of innocent Afghan women and children.

This is Britain’s fourth invasion of Afghanistan, having previously tried to conquer this land in 1839, 1878 and 1919, killing thousands of civilians each time.

The NATO operation has been widely denounced as disproportionate: thousands of innocent Afghan civilians have been killed since it began, as opposed to zero Western civilians. Britain says it will not apologise for the fact that, being 3,600 miles away from Afghanistan, its defences are good enough to prevent any civilian casualties in Britain. Since the start of the operation, Al Qaeda “terrorism” has been completely ineffective.

NATO says it invaded to capture the militant Osama Bin Laden, who it says was responsible for the “terrorist” attack on the Twin Towers in September. Bin Laden says he is fighting against American oppression and imperialism, and that the toppling of the moderate Islamist government of the Taliban is an act of unjustified Western aggression.

Peace Now issued a statement saying: “This isn’t about terrorism from Afghanistan. It’s about Britain fighting to maintain its control over Afghan lives and Afghan land”. Yesh Din said this was “about Britain feeling able to commit war crimes with complete impunity”.

The Israeli press has been outraged. British-born journalist David Horowitz has threatened to burn his British passport. The Jerusalem Post published a cartoon with a sinister take on the Christian injunction to ‘turn the other cheek’, showing a British soldier spinning around to ‘show his other cheek’ as he sprays innocent Afghan civilians with bullets. Gideon Levy compared NATO’s assault on occupied Afghanistan to “Mike Tyson punching a toddler“. Amira Hass wrote that “the idea that the US is defending itself from unprovoked attacks is an absurdity“. A letter to Ha’aretz signed by public intellectuals denounced NATO’s “inhumane and illegal act of military aggression“, calling for an international arms embargo on Britain.

After US warplanes flattened a village, killing at least 100 civilians — in what the Americans say was an “accident” — Yonit Levy grilled George Bush’s press secretary Ari Fleischer in an interview for Channel 2. “How does killing children contribute to the purpose of protecting American civilians?” Levy asked. Fleischer called this incident a “tragedy”, but Levy accused the US of being “happy” to see civilian casualties. “You are doing exactly the same thing as Al Qaeda!” snapped Levy. “You are deliberately targeting neighbourhoods in which you know there are women and children!”

Prime Minister Ariel Sharon has defended the West’s right of self-defence, but his deputy Silvan Shalom has called the operation “deliberately disproportionate”.

Meanwhile, Britain and the US were accused of “war crimes” in the Knesset, as MKs denounced Britain’s “slaughter of innocent civilians”, “collective punishment” of Afghans and “barbarism”. Moshe Arens — Israel’s foreign minister during First Intifada — accused Britain of having “no regard for international humanitarian law” and placing a “lower value” on Afghan as compared to British lives. One MK censured the “Blair regime”, another called for Israel to re-evaluate its trade links with Britain and another called for sanctions. “We should not equate terrorists hijacking planes with a supposedly civilised state systematically killing women, children, the elderly and the disabled,” said another.

Protestors had planned to argue that Britain’s policy of “knocking on the roof”, dropping leaflets, making phone calls and calling on civilians to evacuate combat zones was a cynical PR move, but on research they discovered that Britain had taken no such steps.

For now, the bloodshed continues with no end in sight.