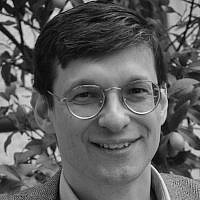 The Blogs
Yoram Hazony
Apply for a Blog
Advertisement
Please note that the posts on The Blogs are contributed by third parties. The opinions, facts and any media content in them are presented solely by the authors, and neither The Times of Israel nor its partners assume any responsibility for them. Please contact us in case of abuse. In case of abuse,
Report this post.

As civil war rages in Syria-Iraq, Libya and Yemen, and tensions between Jews and Arabs in Jerusalem reach levels not seen in more than a decade, the Israeli government has approved a ‘Jewish State Law’ that will confirm Israel’s constitutional standing as “the nation-state of the Jewish people.” Prime Minister Benjamin Netanyahu has been devoting a great deal of time and attention to this piece of legislation, which outsiders might find incongruous:

Some on the Israeli left, backed by prominent voices in the American media, have urged that the law is an unneeded provocation, if not simply racist. In fact, however, the Jewish State law is much needed at this time — not only to assure Israel’s long-term viability, but also as the harbinger of a future solution to the broader crisis of legitimacy that has crippled the entire state system in the Middle East.

On the face of it, Israel should not need a Jewish State Law. Until recently, Israel’s status as the state of the Jewish people had never been seriously been questioned. The idea of Israel as a “Jewish State” has a continuous history going back to Theodor Herzl, father of modern Zionism, who had given this title to his 1896 tract calling for Jewish national independence. In proposals subsequently submitted to the British government, Herzl asked the empire’s assistance in establishing a territory “which shall be Jewish in character,” “founded under laws and regulations adopted for the well-being of the Jewish people,” with a Jewish name and a Jewish flag.

This concept was later incorporated into British and UN proposals for the establishment of a Jewish State in Palestine, culminating in the partition plan adopted by the UN in 1947. Among Jews, support for such a state became virtually universal during the Holocaust — as it became clear that neither the United States nor Britain would act to save the Jews of Europe. (In fact, Britain used force to prevent Jews from escaping to Palestine throughout the war.) In 1948, Israel’s Declaration of Independence, drafted under David Ben-Gurion, used the term “Jewish State” repeatedly. Much Israeli legislation, including the Law of Return offering automatic citizenship to Jews of all lands, was based on Herzl’s view of Israel’s purpose, which was embraced alongside a firm commitment to equal civil rights for non-Jewish citizens.

The idea of a nation-state devoted to the well-being of a particular people was not, of course, unique to Israel. Movements for national self-determination had been known in Europe at least since Dutch independence in 1581, and had gradually led to the independence of additional conquered peoples, from Greece and Italy to Poland and Ireland. Giving eloquent voice to this movement, John Stuart Mill’s “On Representative Government” (1861) urged national self-determination as the most prudent organizing principle for the international order, arguing that only states with a high degree of linguistic and cultural homogeneity share sufficient common interests to become democracies: Multi-ethnic states would necessarily be tyrannies, he wrote, because only oppression can keep the radically conflicting interests of the different peoples of the state at bay. Woodrow Wilson placed this principle at the center of his proposals for reconstruction after World War I. At the time, Herzl’s proposal of establishing a Jewish State fit in perfectly.

But history has not been kind to the idea of national self-determination. Beginning in the 1960s, Western elites turned sharply against national particularism of any kind (at least as far as first-world nations are concerned), citing Nazi Germany as proof that drawing national and religious distinctions is the root of virtually all political evil. In Europe, the result has been the attempt to dismantle the system of independent nation-states and replace it with a European Union. In the US as well, an aversion to drawing national or religious distinctions for any purpose is now felt across a variety of issues, from immigration to national security.

This new disdain for the principle of national self-determination has proved devastating for Israel. Both in America and Europe, the movement to brand Zionism a form of racism continues to gather steam. In Israel, too, “post-Zionism” became the buzzword of fashionable opinion in the 1990s. In this context, Israel’s Chief Justice declared the country’s Jewish character to be “in tension” with democracy, and the Court embarked on a series of decisions aimed at gradually eroding Israel’s legal status as a Jewish State. This process reached a climax in the 2000 Ka’adan decision, which declared policies by the Israeli government and the Jewish Agency to be illegal if not in conformity with the principle of equality.

Of course, equality has always been a crucial value in Israel. But the disappearance of Jewish national self-determination from the Court’s list of the legitimate aims of Israeli policy called into question many of the most basic aims for which the state had been founded. Would it soon be illegal to send Israel’s security services to protect Jewish communities in other countries? To maintain a Law of Return offering automatic citizenship to Jews from other lands? To teach Judaism in the public schools? These and similar concerns are what stand behind Netanyahu’s present “Jewish State Law” — whose purpose is to re-establish the previous status quo on issues of Jewish national self-determination.

But there are deeper reasons for adopting the proposed Jewish State Law.The Herzlian political model has been a dramatic success. As the Jewish State, Israel has absorbed millions of destitute Jewish refugees from Arab lands and the former Soviet Union, offering them freedom from persecution, economic opportunity, and public schools where their children can learn Hebrew, Jewish History, and Bible (something available in the US only to Jews who can afford private school tuition). Far from creating a xenophobic and racist regime, the Jewish State has blossomed into a raucous liberal democracy — the only country in the Middle East in which Christians, Druze and other minorities enjoy free worship and need not fear for their lives.

This success has not been in spite of Israel’s character as the state of the Jewish people, but because of it. To see this, just compare Israel’s trajectory to that of other states established in the region at around the same time, but based on a “multi-national” model: Syria (independent 1946) was assembled by the French by forcing together Alawite, Druze, Kurd, Assyrian Christian and Sunni Arab peoples — willfully ignoring national and religious boundaries, as well as the vocal demands by some of these peoples to be granted independent states of their own. Iraq (independent 1932) was a similar British construct, imposing a single state on radically disparate Kurdish, Assyrian, Sunni Arab, and Shia Arab peoples, among others. Most states in the Middle East — “Pan-Arab” in name only — were built by the Western powers in just this way.

The results have been just as Mill predicted: Israel, built around a cohesive and overwhelming Jewish majority, was able to establish internal stability without repression, and quickly developed into a fully functioning democracy. Whereas the other states of the region have been able to retain their integrity only through brutality and state terror. The destruction of the Sunni city of Hama by Syria’s Alawite regime in 1982, and the gassing of Kurds in Halabja by Iraq’s Sunni regime in 1988, are only the best-known examples of what has been a chronic dilemma for these regimes: Either greater repression, or collapse.

We can hold off on reaching this conclusion as long as we please: But there will not be peace in Syria-Iraq until the borders are redrawn along ethnic and religious lines. In the end, Kurds, Alawites, Christians, Druze, Sunni Arabs and Shiite Arabs must each have their own nation-state, each devoted to the well-being and interests of one people. And each must have its own “Law of Return,” offering a place of refuge and automatic citizenship to the scattered and persecuted members of this one people.

In a sense, this is a distinctly Israeli vision, emerging from the Jews’ experience of suffering and redemption in the last century. But it is also a humane and universal vision — the only one that can offer genuine hope to the devastated peoples of our region. The proposed Jewish State Law reaffirms Israel’s commitment to the political principle of national self-determination, which made the existence of a free Jewish nation a reality in our time. And it holds up this concept as a model and a beacon for persecuted peoples across the Middle East, who yearn to achieve for their own children what our grandparents achieved for us in bringing Israel into being.

About the Author
Yoram Hazony is President of the Herzl Institute in Jerusalem. He is author of “The Jewish State: The Struggle for Israel’s Soul.”
Comments