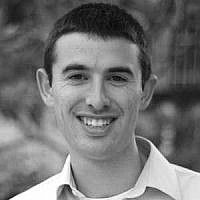 The Blogs
Michael Rainsbury
Jewish Educator
Apply for a Blog
Advertisement
Please note that the posts on The Blogs are contributed by third parties. The opinions, facts and any media content in them are presented solely by the authors, and neither The Times of Israel nor its partners assume any responsibility for them. Please contact us in case of abuse. In case of abuse,
Report this post.

It’s getting unbearably hot in Israel. The aftermath of Friday’s terrorist attack, which bears all the hallmarks of being carried out by Jews, has led to anger, outrage and a sense that something needs to happen, fast. And rightly so — Israelis and Jews around the world are proud of Israel’s tolerant society and respect for all human lives, whether Jewish or not.

The problem is that many of the reactions from Israel’s leadership, however understandable, are lacking, and don’t present a real solution to the huge challenges Israel faces. Naftali Bennett says that you can’t use this incident to blame the entire ‘settler’ community — but is this not the opportunity for him to start a process of serious self-introspection and reform within his camp? Zehava Gal-on blames the right-wing establishment — but is it fair or productive to level such blanket criticism without nuance? Prime Minister Netanyahu reminds us that Israel’s reaction to this terrorist crime is morally superior than Arab reactions to previous terrorist crimes — but is that really an appropriate message to hear from the country’s leader at this time? Isaac Herzog calls for the security services to spare no effort in apprehending the criminals — but is this the time to preface it with the words “if I was Prime Minister”?

If Israeli society is to find a way out of this crisis, it requires a different kind of leadership, which is able to speak to people beyond their own camp and able to convince an unconvinced world that Israel can live up to its promise made in its Declaration of Independence to be “based on freedom, justice and peace”.

Fortunately, we have one such leader — President Rivlin. Here is a leader who hails from the nationalist camp and yet was welcome at an anti-violence rally. President Rivlin’s words, which ought to be read and internalised by every Israeli, did call for serious self-introspection and action at every level, yet did not blame individuals or sections of the population. He has not jumped on the bandwagon to further a specific political agenda. He did mention a series of horrific terrorist attacks perpetrated by Palestinians to remind everyone that this attack did not happen in a vacuum, but did not use them as a pretext in any way to justify the actions of, or the reaction to, last Friday. He did not make the oft-repeated call for unity we have come to expect, but genuinely tried to build a consensus throughout society, which no sane left or right winger could disagree with.

I worry that his message is not being understood. Following the speech, he has received death threats from the extreme right for ‘betraying’ his own cause. And he is often described as a moderate, ‘despite’ his right-wing views. The possibility of a politician seriously embodying all of these positions and transcending the norms of current politics seems to have eluded many. Yet that is precisely what President Rivlin is trying to do.

If we want more leaders like President Rivlin, we need to create an atmosphere in society where more leaders like him can emerge. We must cultivate a culture whereby we make every effort to listen to those who have different views to us, and to try and identify with the elements we agree with. We might not always agree, but the very process of finding common ground will eventually lead to the possibility of consensus.

Israel is a complex society, with competing ideologies, religious fervour and strong opinions. The Jewish nation is known for being stiff-necked and multifaceted. But it is also known for producing visionary leaders, and finding new avenues out of seemingly inextricable situations.

It is fascinating to note that this tragic event occurred on the Jewish festival of Tu B’Av, the day when according to the Gemara, the strength of the sun starts to weaken. Well, not this year. One of the events that occurred on this day was the difficult decision to readmit the tribe of Benjamin into the nation after the first ever Jewish civil war, itself resulting from a despicable crime perpetrated by members of that very tribe. Tu B’Av serves as a reminder of the depths to which the Jewish nation when sovereign in its own land can sink to, yet also shows us that we have met these challenges and overcome them. If we can’t produce a new, visionary leadership to emerge from this crisis, this heatwave of tension and anger will show no sign of abating.

About the Author
Michael Rainsbury is the Head of Adult Education at the London School of Jewish Studies (LSJS), the creator of the first dedicated English language tours of the Israeli President’s Residence in Jerusalem and a tour guide for Jewish heritage trips with JRoots. After making Aliyah in 2013, he directed gap year programmes for World Bnei Akiva and served as Associate Director at Yeshivat Eretz HaTzvi. He is a former Mazkir of Bnei Akiva UK and teacher at King Solomon High School, London. He holds an MA in Jewish Education from LSJS and the University of London. All articles are written in a personal capacity.
Comments