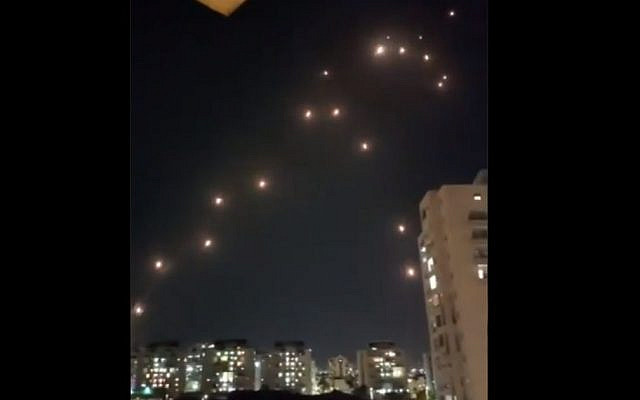 I can’t sleep. I’m so worried about what is happening in Israel. But I’m in the US, I’m not rushing to my safe room to make sure when the bomb hits, I’m protected. What needs to happen for the world to truly open its eyes and see that Israel has the right to defend its people and land in the strongest possible way?

Throughout the day and night, when I see my red alerts going off, I say to myself, “Here we go again.” Why? Why is Israel continually in the unenviable position of defending itself from rockets, riots, and worldwide condemnation? It seems so strange to me that when Israel is attacked, the media reframes the scenario into one in which Israel started the aggression. The riots on the Temple Mount were started by the Palestinians. They brought weapons into their own holy space, and they were attacking the police from Al Aksa. The fires on the Temple Mount were started by the firecrackers shot at the police, not by the police. The barricades at Damascus gate were set up to maintain order. That is a reason to riot?

Those facts don’t matter because antisemitism is rampant worldwide and it is irrelevant that Israel, the only democratic nation in the Middle East and only Jewish nation in the world is being attacked. It doesn’t matter that Israel follows the rule of law and wants to maintain peace, lawfully and security, morally throughout the nation. It doesn’t matter that in this particular case, as in most cases the Palestinians incited their people to violence and blamed Israel.  Abbas cancelled the elections, obviously Israel’s fault. Hamas angry that they didn’t have the opportunity to take over the reins in the West Bank through elections so Hamas created an opportunity to incite even further. Fathi Hammad, a Hamas political leader literally told the throngs of young, angry Palestinians last Friday to “buy cheap knives in order to behead Jews.” The media doesn’t report that information.

If we face reality, Israel will be condemned no matter what it does, so perhaps, Israel should use the strongest possible force to end this attack. It’s time to stop the barrages. Obviously, during the pandemic, Hamas wasn’t using any money to get vaccines for its people. Instead they were building bombs. Hamas wasn’t working to build the infrastructure of Gaza, Hamas was preparing for conflict. Hamas celebrates whenever a Jew is killed whether it is an 80 year old woman or a 6 year old child. Israelis struggle with the ethics of inadvertently killing civilians. In fact, frequently Israel aborts operations if they feel they may hurt the innocent. How many other armies in the world warn the inhabitants of a building before they bomb it.

The issues that the Palestinians are claiming started this war are non-issues. Sheikh Jarrah is a landlord – tenant issue. The Palestinians know the land on which the houses sit is owned by Jews, but they refuse to pay rent. That is the issue. If it happened in the United States, the evictions would be unfortunate, but not worthy of rioting. The Arab street is getting more and more violent. Cities that have been proudly mixed with Jews and Arabs living together are experiencing angry masses screaming to kill the Jews. This is Israel! We cannot be facing another Kristallnacht.

It is true that there are extremists on the Jewish side. They want to be able to pray on the Temple Mount. They want to be able to march to the Kotel and pray on Yom Yerushalayim. Some on the Left feel this is provocative. However, to many Jews, not just extremists, the reunification of Jerusalem was a miracle. We were able to reunite the two sides of Jerusalem. Israel did not expel the Arabs living in West Jerusalem, the way the Jordanians expelled the Jews from the Old City. The Six Day War was a defensive war. Egypt led the call to push the Jews into the sea and four other Arab nations joined them. As we know, Israel miraculously won that war in only six days! The governmental leaders decided to try to free the Old City and they succeeded. Why should that be in question? Jerusalem is the undivided capital of Israel.

Trust me, I understand that Israel is not perfect. Israel has had four elections in two years and is struggling to form a stable government. But Israel is a work in progress and is trying to be as fair as possible. It is hard to be fair, when you are being attacked. We cannot forget that Israel is the Jewish homeland. Israel is the ONLY Jewish homeland. Jews have nowhere else to go home. The Hamas terrorists want genocide against the Jews. Israel shouldn’t have to prove itself as a legitimate nation to the world. Israel has given the world enormous gifts. Israel has multiple noble laureates and is the first to react when there is a global crisis. It’s time for the democratic nations around the world to support Israel’s right to exist and right to defend its people. Am Yisrael Chai!

About the Author
Stephanie Z. Bonder is a true "Jersey Girl" raised in the beautiful Garden State of NJ. She developed her deep love for Israel when her father first started talking to her about Israel when she was a little girl. The family first went to Israel for her bat mitzvah and her Zionism grew. In college, Stephanie studied at the Hebrew University in Jerusalem for her junior year abroad. Stephanie has dedicated much of her life to teaching young children at Golda Och Academy, a Solomon Schechter Day School in West Orange, N.J. In her volunteer hours, she is part of a 5 generation life member family of Hadassah, the Women's Zionist Organization of America. She currently is a member of the National Board. Stephanie continues to educate teens and adults on Jewish Peoplehood, Zionism and current events in Israel through her involvement with the Jewish Federation of Greater Metrowest and her synagogue, Congregation Agudath Israel. All of her blogs are her own personal opinions and do not represent the organizations with which she is affiliated.
Related Topics
Related Posts
Comments