For more than a decade, the Presbyterian Church (USA), a shrinking Protestant denomination headquartered in Louisville, Kentucky, has engaged in a persistent and intentional campaign of Jew-baiting. The people in the pews are not directly responsible for this campaign, but they do bear some measure of responsibility for allowing it to happen. They sat on the sidelines while so-called “peace activists” affiliated with the Israel-Palestine Mission Network of the Presbyterian Church (USA) produced hateful anti-Israel propaganda that portrayed the Jewish state as a singular threat to peace and human rights in the Middle East. The IPMN and its supporters also portrayed American Jews as enemies of democracy in the U.S.

Every two years, IPMN supporters put forth overtures demonizing the Jewish state onto the agenda of the denomination’s General Assembly and then enlisted anti-Zionist Jews from Jewish Voice for Peace to advocate for these resolutions, as if this marginal organization spoke for the entire population of Jews in the U.S. and was a reliable source of information about the Arab-Israeli conflict. Wrong on both counts.

The church’s laity did not wake up to the rot in their denomination when prominent theologians and educators in their church met with Hezbollah, an explicitly antisemitic organization that seeks Israel’s destruction. In 2004, one of these theologians said talking to Hezbollah was easier than talking with American Jews. That should have been a clue that something was wrong in the PCUSA, but it wasn’t enough to arouse the laity.

The church’s laity did not object when their denomination’s leaders and staffers in Louisville ran interference with the leadership of mainstream Jewish groups by offering up the tired old refrain that “criticizing” Israel is not antisemitic. But the people from IPMN were not merely “criticizing” Israel, but were instead de-legitimizing the very notion of Jewish self-determination. The IPMN encouraged its supporters to embrace propaganda produced by Hezbollah. The IPMN trafficked in ugly antisemitic imagery on its Facebook page and produced numerous documents portraying Zionism — the Jewish demand for self-determination — as “the problem” in the Middle East.

One IPMN leader encouraged Hamas to continue to hold Israeli soldier Gilad Shalit as a hostage until Israel acquiesced to Palestinian demands for “right of return.” This same leader declared that Israeli soldiers “are not human beings” in a Facebook post. That should have been a clue that something was seriously wrong in the denomination, but again it was not enough to wake up the laity.

When defending the IPMN’s polemics from Jewish criticism became untenable, the church’s staffers in Louisville trotted out the line that the IPMN was not an official part of the church itself, when in fact, the organization was created by a 2004 vote of the denomination’s General Assembly. People who wanted to donate to the IPMN did so through the denomination’s website.

At one point, when some church staffers concerned about Christian-Jewish relations attempted to document how so-called peacemaking commentary promoted hostility toward the Jewish people, the anti-Israel activists screamed bloody murder and got the document watered down.

All of this happened while the denomination’s General Assembly offered nary a word of criticism of jihadists who engaged in acts of genocide against Christians and Yazidis in Iraq and Syria and while Christians throughout the world endured terrible acts of persecution and murder at the hands of jihadists. And it all happened while churches were leaving the PCUSA to join other denominations in droves.

A small group of activists from a group called Presbyterians for Middle East Peace (PFMEP) tried to confront IPMN’s agenda. It achieved some victories but was largely unsuccessful in its effort to stop the PCUSA from being hijacked by anti-Israel ideologues.

PFMEP’s failure was not rooted in incompetence on its part, but in the nature of the opponents it faced. For IPMN and its allies, the PCUSA’s status as a sacramental community was irrelevant. For the anti-Israel activists, the only thing that mattered was passing overtures at GA that attacked Israel. Anti-Israel BDS resolutions were the only sacrament IPMN and its supporters cared about.

The IPMN and its allies in the denomination do not care one whit about what the denomination would look like after it “wins” at General Assembly. Having such a monomaniacal and non-negotiable focus is a great advantage in the PCUSA, where folks place great value on being “nice.”

By way of comparison, the folks from PFMEP love their denomination and do not engage in scorched-earth tactics to achieve victory. They do not burn their church down to save it. Total war is not their thing. They are democrats in the traditional sense of the word. They play by the rules and do not regard their opponents as mortal enemies. This is their great weakness and their ultimate strength, a strength that hopefully the laity in the PCUSA will someday recognize. 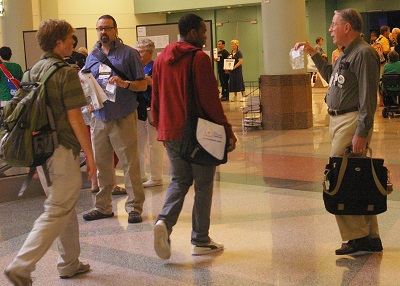 So-called peace activists display stones taken from a house destroyed by the Israelis in an effort to curb terror attacks against its civilians. They made this display at the PCUSA’s 2010 General Assembly. Presbyterian peace activists regularly highlight Palestinian suffering caused by the Israel-Palestinian conflict, but rarely condemn Palestinian terror and incitement against the Jewish state. (Photo: Dexter Van Zile)

The difference between the two sides of the debate became manifest in the run-up to the PCUSA’s 2010 General Assembly where delegates were asked to approve a report produced by a Middle East Study Committee (MESC), which as events would reveal, was hijacked by Israel haters in the denomination.

The committee was charged with providing a comprehensive and factual understanding of the Israel-Palestine conflict that could be used to educate Presbyterians and inform their church’s voice when it tried to promote peace in the Middle East.

The resulting report did not qualify as a peacemaking text. It waffled on Israel’s right to exist as a Jewish state and demonized Israel for killing Gassan Kanafani in July, 1972. The report described Kananfani as a “poet” who was murdered because of what he wrote, omitting the fact that he was also a high-ranking member of the Popular Front for the Liberation of Palestine. Kanafani met with the terrorists from the Japanese Red Armey who, at the behest of the PFLP, murdered 26 people and injured 80 others in the Lod Airport Massacre in May 1972.

What should have been an authoritative and responsible text was turned into a hateful bit of propaganda, so hateful in fact, that even a few pro-Palestinian folks balked at its passage and agreed to a truce to the pro-Israel community in the denomination. Under the truce, the dishonest “historical analysis” of the report was removed and replaced with “personal narratives” provided by both Israelis and Palestinians.

This truce (dubbed “The Miracle in Minneapolis” and referred to “as a new way of being a church”) didn’t last. IPMN demonstrated it was still interested in waging ideological war against Israel by producing ugly propaganda such as the 2014 booklet “Zionism Unsettled” which was eventually disowned by the denomination’s leaders in Louisville.

But by this time, the damage was done. The denomination’s leaders in Louisville allowed angry partisans with an unreasonable contempt for Israel and Jews to determine how the church would speak about the Arab-Israeli conflict and in so doing, assisted in the destruction of the denomination’s reputation.

As a result of the IPMN’s propaganda war, the word “Presbyterian” has become synonymous with antisemitism, Jew-baiting, unfathomable contempt for Israel and a head-in-the-sand approach to jihadist violence against Christians and other religious minorities in the Middle East. It did not have to be this way. The PCUSA did not have to allow itself to be used as the backdrop for a modern-day reenactment of the Salem Witch Trials.

It could have been otherwise.

The denomination had the intellectual firepower and theological sophistication to deal with the Arab-Israeli conflict in a responsible, serious and credible manner. It was in a position to formulate pronouncements about peace and justice in the Middle East that would have made future members of the denomination proud. It could have confronted human tragedy with integrity and humanity.

The best evidence that it could have been otherwise is evident in the way it approached the problem of sexual abuse among its community of missionaries in Africa. When the children of Presbyterian missionaries went public with stories of abuse they endured at the hands of another Presbyterian minister while living in the Congo and told their story to the Dallas Morning News in 1999, the PCUSA embarked on a long and painstaking struggle to document the problem of sexual abuse. Over the course of the next 11 years, the denomination convened two panels, both of which issued detailed reports about the problem of sexual abuse. The first report, issued in 2002 was 174 pages in length, the second, issued in 2010 was 546 pages long.

The panels themselves were comprised of lawyers, counselors and researchers who worked assiduously to uncover information about the suffering endured by the victims and to ascertain the facts about what actually happened.

The work of these panels was marked by a high degree of professionalism, a great sense of the tragedy they were investigating, and a huge commitment to not making the problem they were investigating worse. As more people came forward with stories of abuse in other areas of the Presbyterian Mission field, the denomination’s investigators looked into problems in Cameroon, Congo, Egypt, Ethiopia, India, Kenya, Mexico, Pakistan, Thailand, and Zambia.

Examining the texts of the reports leaves readers with a profound sense of just how serious the denomination took the problem and how serious the investigators took their responsibilities as researchers. They knew their work was going to be examined closely by future generations of Christians to see whether or not they got it right.

The folks on these two panels were looking for the truth, not scapegoats. They treated the problem with the gravity, humility and seriousness it deserved — as well they should have.

It was a jugular issue of singular and great importance to the denomination.

All this raises an obvious question.

Why didn’t the PCUSA treat its investigations into the Arab-Israeli conflict with the seriousness with which it dealt with the problem of sexual abuse endured by the children of its missionaries?

Why did it allow the IPMN, which it created with a 2004 vote of the General Assembly, to engage in such ugly acts of scapegoating against Israel and Jews in the U.S.? Why couldn’t they treat issues related to the Jewish and Palestinian people with the same seriousness with which they addressed an issue of jugular importance to Presbyterians?

At some point down the road, principled Presbyterians are going to have to come to terms with what their denomination has done. When the time for reckoning comes, the church will have a model to follow.