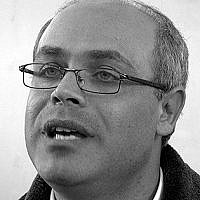 The Blogs
Ghassan Manasra
Apply for a Blog
Advertisement
Please note that the posts on The Blogs are contributed by third parties. The opinions, facts and any media content in them are presented solely by the authors, and neither The Times of Israel nor its partners assume any responsibility for them. Please contact us in case of abuse. In case of abuse,
Report this post.

A Sufi sheikh was walking in the desert with one of his disciples. The disciple was talking at great length about a dispute he was having with a fellow disciple. All the while, the sheikh was listening and smiling, until finally he turned to his student with great love, his eyes filled with fondness and respect, and said: O my son, do you wish to hear the truth or that which is higher than the truth?

The disciple was surprised and immediately answered: O Sheikh, from the beginning of my path with you, you have taught me that we seek the highest station, the station of truth. Are you now telling me there is something more lofty than truth?

The Sheikh turned to him and said: People usually misunderstand. Most people seek their own truth, and ignore the Supreme Truth. Because the truth we seek is truth diluted with our own negative thoughts, which cultivate prejudices and various other distortions. But the Supreme Truth is the one we don’t have to seek because it is within us. Truth is the God that is present in all places. Yes, there is something that is higher than the truth of Man: reconciliation is higher. Because reconciliation is Supreme Truth itself.

This is the journey we made together, Rabbi Froman and I. We traveled together to bring reconciliation into the path of Supreme Truth. And our “Sheikh” – our guide – was the heart.

It’s very difficult for me to grasp what has happened. Very difficult. It’s hard to lose a partner, one with whom I traveled during difficult times to so many places in order to change the status quo, the explosive situation, the tension and the conflict.

A man of such stature, who never rests one minute so as to keep laying the ground for future generations, is hard to find these days. I always called him righteous because he always looked far ahead and did not let superficial limitations control him. He removed the very concept of “evil inclination” from his life, so he worked for the common good.

I recall one time in the U.S., at the end of a meeting with Senator George Mitchell, who had just been appointed Special Envoy for Middle East Peace, Rabbi Froman said to me: I feel I’m getting older and who knows: maybe I won’t be able to travel with you all over the world. Don’t stop. Continue along this road.

I told him: you’re still young. We have a long way ahead of us, and there are still so many other journeys. But at the same time I felt a sudden wave of sadness. I did not want to believe that what he was saying could really come about. I didn’t want to even think about it.

Once when I was a child, my grandmother told me the best thing a man can be is righteous, but that the way of the righteous is not easy at all. There will always be suffering. I am witness to the fact that Rabbi Froman’s path was not an easy one at all. But he believed in what he did, and worked for what he believed.

I say to Rabbi Froman, from here in this world, I will continue on the path. It is hard for me to be alone here without you. Very hard. But I will not stop.

About the Author
Sheikh Ghassan Manasra is the director of the Islamic Cultural Center in Nazareth, a center promoting tolerance and interfaith dialogue. Ghassan is an ordained sheikh and he is the son of Sheikh Abdel Salaam Manasra, the head of the Qadiri Sufi order in the Holy Land.
Comments