The Blogs
Claire Ginsburg Goldstein
the teddy bear Rabbi
Apply for a Blog
Advertisement
Please note that the posts on The Blogs are contributed by third parties. The opinions, facts and any media content in them are presented solely by the authors, and neither The Times of Israel nor its partners assume any responsibility for them. Please contact us in case of abuse. In case of abuse,
Report this post.

“Stand up in the presence of the aged, show respect for the elderly and revere your God. I am the LORD.” Lev. 19:32

I always wanted to know what that meant when I was younger. I didn’t see much respect for those elderly around me. I watched as many were put into old people’s homes. I wondered if anyone bothered to visit them or cared about them.

I chose to volunteer at an old age home when I was a teenager. I was curious. I thought that if those people were still alive, they had to have something of value to contribute. I was not wrong.

There were artists and piano players. There were card players and those who loved to share a magic trick. There were joke tellers and chess players. Some even shared a Dvar Torah or two.

I knew that the elderly had merit. They didn’t have to be shored up, in an impersonal space and forgotten.

What would happen to my parents once they became elderly? How would we chose to treat them? How would everyone else?

My father never had the opportunity to find out. He died from cancer right before his 56th birthday. What a loss to us all.

My mother, Peleet or Mindl Devorah, z”l, took the “bull by the horns”. She didn’t wait for an invitation. She stepped up to the plate and hit a homerun.

My mother wanted to live life to its fullest and share her joy with her grandchildren, once they began to emerge into this world.

She read books with the eldest.

She built with legos and other toys around the house with another.

She watched in amazement as one took apart the vacuum cleaner and figured out how to reassemble it.

She held discussions and debates with two others.

She was awestruck with the curiosity of a few others.

She fell backwards in her chair as another told her, “I have this. I got this. I have an idea.”

She appreciated the artistic talent and the cooking abilities of a few others.

She valued the talents of her grandchildren and let them know it, as individuals and as people.

But she just didn’t sit back and watch.

She was an active participant in their lives.  She taught them skills. She played “potch-y kichelach”  She exchanged her ideas with them. She shared her love of being alive and being Jewish.

And now it is approaching her 8th yahrtzeit. It is challenging to me to accept the fact that she is gone and is missing all of these life events. She would have loved to have been here. Shira and Ivan just married Jewishly, in a Jewish ceremony led by Brett and his fiance/wife Sofia, and Brett is soon to follow.

I would like to think that she hovers and watches over us all.

And now I am in front line.

I am aging. I am preparing to get my life’s final chapters (will, living will, dividing up property, and funeral plans) in order. What kind of Bubbie will I be? What can I offer from the gleanings of the teachings of my mother? What can and will I share as a Bubbie, following in the footsteps of my mother?

I do imagine that I will take her lessons of life and bring them forward. I won’t allow myself to succumb to the brittle aging process if I can avoid it. I want to pay my Bubbie-ness forward.

It’s my tribute to the aging Bubbie, that her grandchildren adored and learned from.

It takes a Bubbie. It just does. 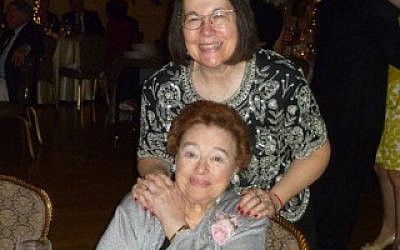 I think that this is the last grandchild’s wedding that she attended.  She wasn’t going to allow anyone to take the wind from her sails, not if she could help it.

She did what she felt was the right thing to do; dote, love and adore.

With much love and gratitude,