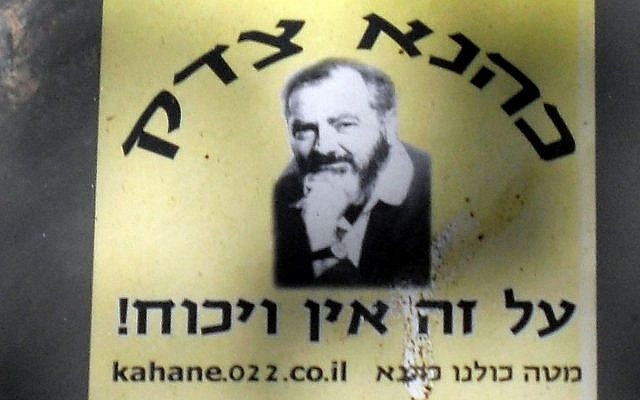 A sticker that appeared in Jerusalem in October 2010 showing the picture of Meir Kahane (1932-1990) with the caption in Hebrew: "Kahane was right, about this there can be no debate". Itamar Ben Gvir, leader of the Israeli far-right Otzma Yehudit party, is an ardent admirer of Kahane. (Credit: Djampa / Wikimedia Commons)

Itamar Ben Gvir and other ultranationalists are increasingly popular in Israel, and polls show that young Israelis are far more right-wing than older Israelis, which suggests that the trend will continue. Based on recent polls, Ben Gvir’s ultranationalist party would win 13 seats out of 120 in the Knesset. That would make it the third largest party and a major player in a potential Likud-led coalition. The Times of Israel wrote, “It has become clear that Netanyahu won’t be able to form a government without the extremist leader taking a central role”.

But many Israelis are horrified by Ben Gvir’s popularity. The Jerusalem Post wrote that, “Ben-Gvir is the antithesis of what Israel’s founding fathers had in mind when they established the State of Israel and dreamed of coexistence with their Arab neighbors”, and that, “he is an Israeli version of what white supremacists are in the United States”. From that perspective, Ben Gvir is an aberration in Israeli politics; his popularity is the result of being “among the most covered politicians in Israeli mainstream media” and not a true reflection of Israeli public opinion.

Another perspective, however, is that the ascension of Ben Gvir and other ultranationalists into mainstream Israeli politics is a natural next step for Israel, and that many Israelis are comfortable with his policies.

But is this a drastic departure from Israel’s position under more moderate governments? As explained in the Jewish Virtual Library, “An agreement to dismantle the settlements outside the blocs [the “consensus” settlements that are expected to become part of Israel under a two-state solution] would require the removal of more than 140,000 people”. Removing so many settlers would not be easy politically for any Israeli government; therefore, the fact that there is no talk within the Israeli political mainstream of shrinking the size of these settlements suggests that most Israeli politicians are, at the very least, unconcerned about obstacles to the creation of a Palestinian state.

Ben Gvir considers that Meir Kahane was “a holy man, a righteous man” even though Kahane was an extremist whose party was banned from the Knesset in 1988 due to his anti-Arab extremism, which consisted of policies such as taking away citizenship from all Arabs and instituting separate beaches for Jews and non-Jews. Ben Gvir has not suggested going this far, but he wants to expel Arabs who demonstrate that they are “disloyal” to Israel by, for example, attacking IDF soldiers, yet he would not apply the same policy to Jews who attack IDF soldiers. If Ben Gvir’s policies were implemented, even if they don’t go as far as his hero Kahane’s policies, there would no longer be equal rights for Jewish and Arab citizens of Israel.

But again, is this is a drastic departure from Israel’s position under more moderate governments? As I have written previously, there is overwhelming evidence that for all intents and purposes, Israel treats the West Bank as if it was part of Israel, and yet the Palestinians who live there are not Israeli citizens and don’t have equal rights with Israelis.

Israel’s enemies paint Israel in the ugly caricature of an aggressor who refuses to share the land with the Palestinians and who wants to squeeze the Palestinians out of the land altogether. At this time, it’s still possible to argue against these claims by pointing out that Israel has several times accepted two-state solutions while the Palestinians never have, that Arab citizens of Israel have equal rights with Jews, and that Israel would dismantle some settlements, as it did in Gaza, if it was necessary for a peace agreement.

With Ben Gvir in a senior government role, however, that argument would lose credibility. The caricature would start to look a lot like reality. The occupation would no longer look like self-defense. It would look like colonialism.

Israel’s Deputy Foreign Minister Idan Roll, a member of Yesh Atid, said, “If we let people like Ben Gvir and Smotrich manage the country, we won’t get the backing of the United States, the economic support or the strength to protect the State of Israel”.

Idan Roll’s fear is well founded, but I would go further. If Israel’s settlements policies continue unchanged, it is natural for many Israeli voters to look at the policies of ultranationalists such as Ben Gvir and think that they make sense. After all, those policies seem to be the logical continuation of the current policies that have been mainstream in Israel for a long time. In that sense, the rise of Ben Gvir is owed not only to Likud leader Benjamin Netanyahu who needs him to form a government but to all Israeli politicians who are comfortable with continuing Israel’s current settlements policies.

In other words, if mainstream Israeli politicians are serious about stopping ultranationalists such as Ben Gvir, they need to do more than denounce their policies. They need to take a serious look at reversing Israel’s existing settlements policies. They need to show more clearly that Israel recognizes Palestinian self-determination and that all policies that run counter to that recognition are not acceptable.