She has Palestine on a plate.

But I found something interesting in this clip, besides the claim that seemingly she was born in…the UK: 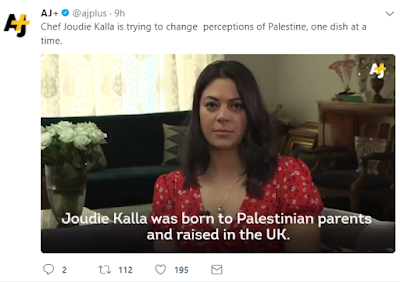 Ms. Kalla is upset as illustrated by these screen snaps: 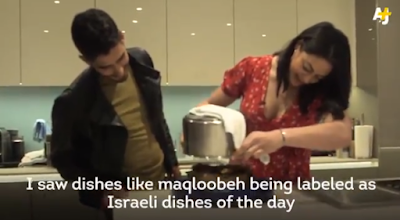 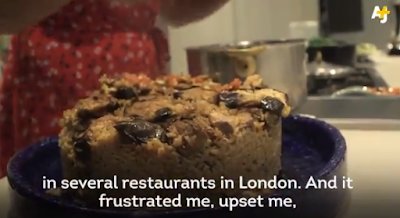 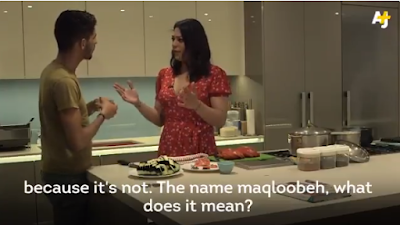 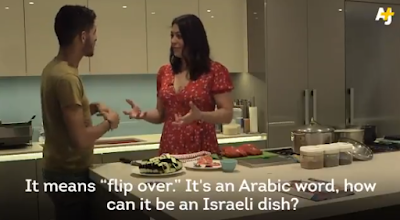 There are two things I wish to address.

The first is that maqloobeh/makluba is a traditional Middle Eastern dish, not specifically “Palestinian”. And “Palestinian” does not necessarily mean Arab, by the way. Yes, it is popular among Arabs-who-refer-to-themselves-as-Palestinians but it is not exclusive to that sub-group of the Arab people, even if some recipes call it the national dish of Palestine. In fact, many cultures have developed “upside-down” dishes. You can find it listed as a Jordanian specialty. Oh, Jordan is part of Palestine, right?

The second point is that many Israelis speak Arabic. Many were born (and fled) from Arab countries. Arab and Arabic culture and gastronomy are not either foreign or repressed in Israel.

The maqloobeh I have eaten and quite enjoyed is at the Eucalyptus Restaurant opposite the Jaffa Gate in Jerusalem, prepared and served extraordinarily by my friend, Chef Moshe Basson.

Ms. Kalla is highlighted another time in Haaretz.

How many Israeli cooks/chefs are afforded the same treatment in the Palestinian Authority media?

Oh, and one more thing.

If Ms. Kalla attempted to serve lentils in Gaza today dressed like this: 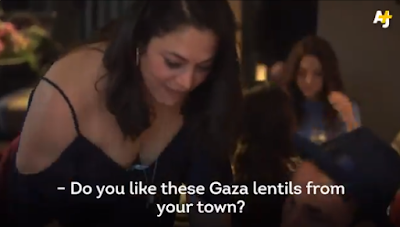 I wouldn’t be surprised if she would be physically attacked.

But that’s her Palestinian problem to digest.

About the Author
Yisrael Medad, currently is a Research Fellow at the Menachem Begin Heritage Center in Jerusalem and Deputy Editor of the English Language Anthology of Jabotinsky's Writings. American-born, he and his wife made Aliyah in 1970. He resides in Shiloh since 1981. He was a member of the Betar Youth Movement World Executive and is a volunteer spokesperson for the Yesha Council. He holds a MA in Political Science from the Hebrew University and is active is many Zionist and Jewish projects and initiatives.
Related Topics
Related Posts
Comments
Advertisement