The easy part is finding friends. The impossible part is changing the minds of those who don’t want to be confused by the facts. I’m talking public diplomacy, or what everyone I know who cares about Israel bemoans as the dire state of what we colloquially refer to as hasbarah. And then I’m going to tell you what you can do about it.

The background: I just returned from a quick two-day visit to Sweden for an advocacy blitz planned pretty much overnight in response to the odious accusations made by the Swedish Foreign Minister last week (echoing loads of similar statements she’s made over the past several months), blaming Israel for “extrajudicial killings” of Palestinian terrorists caught in the act of committing their heinous murders. 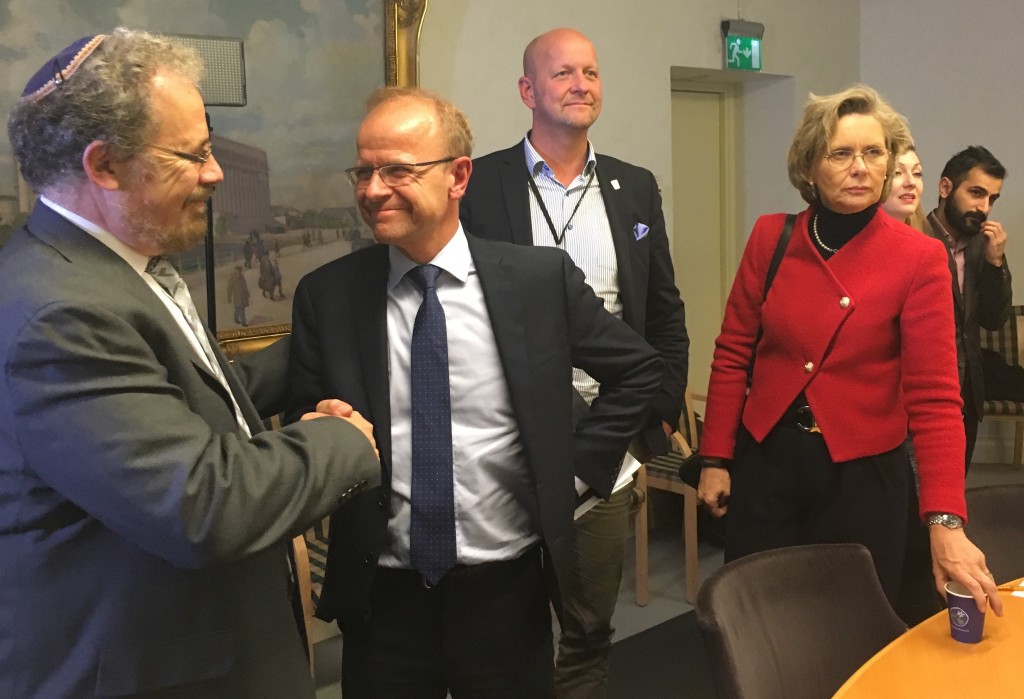 I was there for a special briefing of Swedish parliamentarians initiated by the World Zionist Organization and its local representation, the Zionist Federation of Sweden. What I discovered in the process of facilitating the session is that we have plenty of good friends in high places, not only in Stockholm but around the world. We made the connections at the Riksdag through the good offices of the Israel Allies Foundation, dedicated to promoting communication and information sharing among legislators across the political spectrum who are united in their belief that the State of Israel has the right to exist in peace within secure borders. The Foundation works with a network of pro-Israel parliamentarian caucuses around the globe in condemning political and physical attacks on Israel, pre-empting initiatives intended to weaken Israel’s international standing and security, and organizing meetings, press conferences, and interfaith events that deepen public awareness of the realities of the Israel-Palestinian conflict.

In order to do just that, the WZO brought in Itamar Marcus, head of the Palestinian Media Watch, who shared with those assembled incontrovertible evidence of the Palestinian Authority’s incessant incitement towards violence, particularly among young Palestinians. It is a well-orchestrated and deliberate campaign, Marcus observed, that made last week’s bestial murder of 38-year old Dafne Meir by a 15 year-old child, and Saturday’s tragic death of a 13-year old Palestinian girl killed while attempting to stab an Israeli security guard all but inevitable.

“The main reason we have so many young Palestinian terrorists is because the average Palestinian child grows up seeing terrorists as heroes and role models,” he explained, noting that more than 25 PA-supported schools and numerous sporting and cultural events have been named for those who have murdered Israeli civilians.

Shocked by the presentation, MP Mikael Oscarsson, who hosted the event, pledged on behalf of the MPs present not only “to call Foreign Minister Wallström to a public debate in the plenum to answer questions about what we have seen” but also to introduce legislation that would halt Swedish funding of the PA until such time as it ceases to glorify the murder of innocent civilians and abuse children by subjecting them to the veneration of those who carry them out.

The bad news is that Oscarsson faces a major uphill battle in getting the legislation he is proposing passed into law. During our 48 hours in Stockholm we were told numerous times by a variety of personalities – Jewish and non-Jewish alike – that the Swedes are not particularly open to examining the realities of the Israeli-Palestinian conflict in any objective manner. The media has for so long presented Israel as the aggressor, occupier, and belligerent party in the dispute that no amount of factual evidence to the contrary, no matter how nuanced or left-wing in its presentation, is going make much of an impact on public discourse, not to mention on the average lawmaker. Which, unfortunately, is the case most everywhere.

And that brings us back to the impossible, which, as far as I am concerned, is neither reason nor rationale for throwing up our hands. Was it Ben Gurion who, taking pride in the triumphs of the Zionist movement, is said to have remarked that the difficult we get done immediately, and that the impossible takes just a little longer? I’m with him. Encouraged by the warmth with which we received by friends in -12˚C Stockholm and bolstered by the embrace of the Israel Allies Foundation operating around the world, I am convinced there is every reason to keep plugging away in making our case heard. And there is a plethora of excellent resources available to anyone who would care to join in the effort. The complaint that there just isn’t any good material out there just isn’t true. WZO has an annotated listing of over 40 websites and organizations of varied orientations promoting Israel in every fashion and offering myriad ways to make a difference.

Take your pick and take up the cause. I’ve learned that we do have friends everywhere and, working alongside them, we just might be able to accomplish the impossible. One small victory at a time.

About the Author
Dr. David Breakstone is the Executive Director of the Yitzhak Navon Center for a Shared Society. He previously served as deputy chair of the Jewish Agency executive and the World Zionist Organization and as the conceptual architect and founding director of the Herzl Museum and Educational center in Jerusalem. He welcomes correspondence from those determined to forge Israel as the shared society it was always meant to be at breakstonedavid@gmail.com.
Comments