It’s the summer of 1951. Farouk rules as “King of Egypt and Sudan”. Only in October will the Parliament cancel the treaty allowing the British to control the Suez Canal. In a year’s time Gamal Abdel Nasser will overthrow the monarchy and lead Egypt into Arab nationalism. But meanwhile in cosmopolitan Alexandria, Egyptian Jews continue to enjoy a very sedate, dignified, European style of living. As they go to the track to watch the horses, or play cards and gossip, there is a growing awareness that something is about to happen.

The Alexandria described in the novel Alexandrian Summer (New Vessel Press, April  2015) is very sensuous. “Surrounded by water. Water, water, water. In the north, her full breasts dip in the water of the Mediterranean. In the south, the waves of Lake Mariout cool her behind with arousing caresses. In the east, her fingers flutter through the Nile as it runs its brown water with limp sleepiness.” 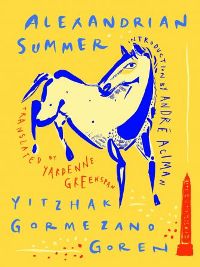 As the first person narrator says in the opening pages, “The story of the Alexandrian summer does not present itself easily. It is wrapped in layers of nostalgia, of oblivion, of generalizations.” The narrator speaks from his new home in Israel, having left “the Alexandria of the days of King Farouk” when he was ten years old, just as the author did.

Although it seems at times that Alexandria is the protagonist of the novel, it is actually the “story about the Hamdi-Alis, a family from Cairo that came to spend a summer of joy on the shores of Alex[andria].” This family, with its Arab last name, “embodies the joie de vivre, the unending Mediterranean energy.” Arriving as guests in the home of ten-year-old Robby, they are the main characters we follow, as Robby’s own tale does not capture our interest as fully.

The sensuality of the story is reserved for the city, with the exception of the pubescent experimentation of Robby and his friend, Victorico Hamdi-Ali. This entails a little too much homoerotic humping, in my opinion. Robby’s sister is in a relationship with Victorico’s brother David, a Jewish jockey competing with Muslim riders at the city’s horseracing track. David’s father stresses that winning races is a mission, not a game, but David is willing to give it all up to be with Miss Anabella, as her father affectionately calls her.

Robby’s family talks about two older sons who are already living in the new State of Israel and there is a growing recognition that one day the entire community will have to emigrate. After all, the locals are shouting “Death to the Jews” at every opportunity. The family realizes that the bourgeois lifestyle they lead, with two servants in every home, “coquettish flirtation at the fashion hubs of Europe,” and “French, sometimes English” as the lingua franca, will soon end. In the meantime, though, they can enjoy one last Alexandrian summer.

The action in the novel takes place on Rue Delta, a very real street as described in the book’s introduction written by André Aciman, who was also a resident of Alexandria before making aliyah. We learn fascinating information about the city and its Jewish community from Aciman’s words, which leave a long-lasting impression of a rich culture that no longer exists.

As the book’s narrator says, “One day electric lamps would be installed on Rue Delta, and then the lamplighter would disappear from the landscape, fading along with our forgotten childhood, which grows distant with every passing day.”

Alexandrian Summer was translated by Yardenne Greenspan and published by arrangement with The Institute for the Translation of Hebrew Literature.