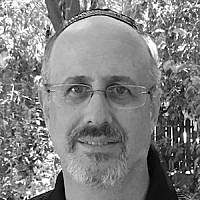 The Blogs
Mark B. Greenspan
Apply for a Blog
Advertisement
Please note that the posts on The Blogs are contributed by third parties. The opinions, facts and any media content in them are presented solely by the authors, and neither The Times of Israel nor its partners assume any responsibility for them. Please contact us in case of abuse. In case of abuse,
Report this post.

Marilyn and Liora go back to their university days at Hebrew U where they both studied Bible. Born in Romania, Liora is, for the most part, a secular Jew but one with a deep love for literature in general and the Bible in particular. After all these years she is still excited about teaching high school students Tanach and helping them find its relevance for our world and their lives. That love grows out of a deep sense of humanism as well as a love for the Jewish people and Zion.

Our lives have paralleled one another; we have watched each other’s children grow, we have followed one another’s careers, and we feel a sense of kinship that is deeper than family. When we come to Israel, Marilyn and Liora simply pick up where they left off each time they see one another.

Mordechai is about ten years older than the rest of us and has retired as a full time anesthetist but continues to remain active both lecturing and practicing his discipline. He was born in Turkey, served in the Turkish army before coming to Israel and becoming an anesthetist. He was the head of the department at Asaf HaRofeh for many years. For Mordechai, being an anesthetist was all about serving others and being of use to society – he would never take private pay for his work and was always available to colleagues and patients alike. As he reflected on his career today, he spoke of his work as his way to make a contribution to Israeli society. For Mordechai, being a good  anesthetist was not only about professional advancement but about being a good Jew and a committed Zionist – giving back to this land that he loves.

Like Liora, Mordechai is a secular Jew. They do not have a kosher home. They do not attend a synagogue. There are few Jewish symbols in their home aside from lots of Jewish books and the typical Jewish items like a Chanukiah that you would expect to find in any Jewish home.  For me, however, they are among the best Jews I know: decent, good, committed to the land of Israel and its people, and ready to help anyone.

Contrast them with Charedi Jews, many of whom refuse to serve in the army, live off the good will of a government they don’t recognize or respect, and brazenly walk into the synagogues of decent and committed Orthodox Israelis with their hands out each morning expecting tzedakah as if it were an entitlement. I don’t know what my friends’ political affiliations are – we never considered it important to talk politics – but it is certainly not with groups that would simply write off Jews who are not the same as them, and reject the vows and commitments that the government has made to world Jewry. Was that what the ultra-orthodox political leaders had in mind when they recited Kol Nidre last Yom Kippur? “God – forget about any promises or commitments we made last year – our words are not our words…..”

I don’t expect Charedim to change what they believe or who they are. I don’t like it when they pass judgment on how I practice Judaism so I would not ask them to compromise their beliefs just because I disagree with them. But I do expect them to treat me with derech eretz, with basic respect, and to make sure that there is space for both of us in this society. Religion should not be a blunt instrument that is used to exclude others from society. Government should not be a means of imposing religious standards.

I am not a big supporter of the Kotel. I feel no need to visit the Kotel when I am in Israel, and do not find it to be an especially holy or uplifting place. Personally, I think there is something idolatrous about making one place so important. But I do understand its symbolic significance to many Jews both here and around the world. I recognize the conflicts between Orthodox and non-orthodox Jews in this regard and the need to provide a space that works for the Orthodox. It is easier for us to compromise than it is for them. What I do not understand is the need of the Rabbinate not to allow a space which was of no interest or use to them up until now to be unavailable to those who are not committed to their definition of Jewish practice. And I certainly do not understand the cynical support of the Prime Minister and certain parties to support such hatred and bigotry in the interest of holding on to their political ascendancy. Shame on the Knesset and shame on the Prime Minister for their willingness to write off much of American Judaism in this fashion.

Which brings me back to my friends, Liora and Mordechai.  I will gladly cast my lot with decent people like them. Shabbat and kashrut are important – essential to my understanding of Judaism – but not more than decency and honesty and a willingness to build a society for all its people. My friends have spent much of their lives serving this land by living as contributing and caring human beings. They represent what Israel was meant to be, what Israel should be. There would be no Israel without people like them.

Please do not misunderstand me. I believe that what makes Israel, Israel is the unique combination of all its people: Sephardic and Ashkenazic, Dati and Lo Dati, Charedi and Hiloni. Like the Lulav and Etrog we cannot exist without all our people. So why must some work so hard at disenfranchising those of us who define our Jewish commitments differently?

The secret of Jewish survival is not a wall; it is the people who have given their lives for our way of life whether it is through the study of Torah or the defense of this land. It is the people who constantly remind us of the need for justice and decency in the way we treat all people whether or not they are religious and whether or not they are Jewish. I cannot get excited about the political drama revolving around some stones at the heart of Jerusalem, defending the place of all Jews in this land is a cause worth fighting for!

About the Author
Rabbi Mark Greenspan is the spiritual leader of the Oceanside Jewish Center for over twenty years and is chaplain of the Oceanside Fire Department. He is a graduate of the Joint Program of the Jewish Theological Seminary and Columbia University and was ordained at the Seminary in 1980. Rabbi Greenspan has been a congregational rabbi for almost forty years, serving synagogues in New York, Tennessee and Pennsylvania. He is active in interfaith affairs and is a past president of the Rabbinical Assembly of Nassau and Suffolk Counties. He has translated a nineteen commentaries on the Haggadah over the past two decades. Many of the translations can be found online at Sefaria.com.
Related Topics
Related Posts
Comments