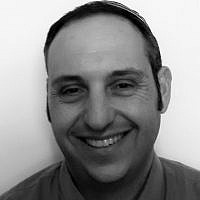 The Blogs
Sholem Hurwitz
Apply for a Blog
Advertisement
Please note that the posts on The Blogs are contributed by third parties. The opinions, facts and any media content in them are presented solely by the authors, and neither The Times of Israel nor its partners assume any responsibility for them. Please contact us in case of abuse. In case of abuse,
Report this post.

Laura Ben-David has utilized a specific incident — women dancing with a Sefer Torah on Simchat Torah — to conclude that “what is sacred” must be made “as accessible as possible to everyone… rabbis still have the reins. It’s time they take them and move forward.” The incident described was not exactly as portrayed, and unfortunately the extrapolation to demonstrating all of Judaism as male-centric and the (male) rabbis refusing to “move forward” is grossly distorted.

On Simchat Torah, my wife and I happened to be in the community Ben-David describes. If we are going to employ labels, then the community is not Modern Orthodox, but rather Religious Zionist — yes, there are many distinctions. The excitement among the women when the Torah was brought to them was palpable both to the women who were dancing and the few men who happened to notice.

Are religious fervor (as Ben-David labels it) and self-realization the prime factors in our religious lives? Most certainly not! These — as with every aspect in our lives — are bound by the “four cubits of Law”; not everything that makes me feel closer to God is positive, advised or even permitted. The tragic narrative of the deaths of High Priest Aaron’s sons Nadav and Avihu when they offered “a strange fire that God had not commanded them (Leviticus 10:1)” instructs us that serving God specifically in the manner He commands is the essence and fundamental basis of Torah Judaism.

Change can be attained in two ways: consensual cooperative discussion or aggressive unilateral actions. In any community, there exists varying degrees of different views and approaches. No individual has the right to impose his or her view on the community, and while the women desiring to dance with the Torah did not intend anything negative, their actions were not in the mode of consensual cooperative discussion.

This discussion will indeed ensue; while the desires and needs of the community members will certainly be central factors, the first concern will be the community’s rabbi’s halakhic ruling — as it should be. On the day itself, the community representatives were ‘caught unawares,’ so to speak, and did their best to act in the best interests of the community — which is their express mandate and responsibility. Despite the best intentions, it is apparent that no one has the right to do as he or she sees fit with community property (including a Torah). Not every innocent act may be perceived as such by others, and this was, after all, an event in the communal realm.

Now to Ben-David’s extrapolative conclusions: Is every change that caters to the individual desires of the contemporary Jew (male or female) “progress”? Must the Halakhah pander to our every lust? In the Orthodox world, the answer is a resounding “no”! The Halakhah and halakhic authorities must relate to every generation and its needs from within the perspective and bounds of the Halakhah. Change and innovation indeed occur and often these are essential to the survival of Jews and Judaism.

However, even when change is sanctioned, is it always truly spiritual, Jewish “progress”? I contend that this is not always the case; on many occasions the forces driving the change or flexibility may not be the purest. Sometimes change — while halakhically sanctioned — is a clear departure from previously hallowed standards.

Historically the religious world (and specifically that of the Halakhah) has been predominantly male. Assigning the blame for all our contemporary qualms to this fact is simply “un-Orthodox.” Torah Judaism is founded on a faith in our Sages and the halakhic process — this faith directs us in accepting the halakhic guidance of our rabbis as a continuation of God’s law issued on Mount Sinai. Clearly, rabbis are human beings — with the failings, prejudices and sociological influences common to any human being — but it is the predominance of the halakhic process that defines Orthodox Jewry.

So, is it your Torah to do with as you see fit? In the communal realm, it most certainly is not! No more than it is my Torah; it is our Torah. Critically, it is the Torah, law and customs that are based on a halakhic heritage, tradition and process. Please respect me, our community (each community unto its own), our Torah and its halakhah.

About the Author
Sholem Hurwitz made aliyah in 1998 from South Africa and lives in Neve Daniel with his wife and 5 kids. After eight years in the kollel of Yeshivat Har Etzion and thereafter teaching Torah to students in seminaries and yeshivot, he currently works in translation and editing.
Related Topics
Related Posts
Comments