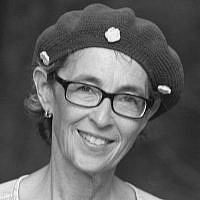 The Blogs
Deborah Fineblum
Apply for a Blog
Advertisement
Please note that the posts on The Blogs are contributed by third parties. The opinions, facts and any media content in them are presented solely by the authors, and neither The Times of Israel nor its partners assume any responsibility for them. Please contact us in case of abuse. In case of abuse,
Report this post.

Back in 2010 when the state of Massachusetts was scrambling to fill the seat vacated by the death of Sen. Edward Kennedy, in a debate against opponent Martha Coakley — state attorney general, long-time Kennedy crony and heir apparent to Kennedy’s seat — Scott Brown famously said, “With all due respect, it’s not the Kennedys’ seat, it’s not the Democrats’ seat. It’s the people’s seat.”

And how could Democrats today not be stunned? As late as 10:20 on election night, The New York Times reported that Hillary Clinton had an 85 percent of winning. “Mrs. Clinton’s chance of losing is about the same as the probability that an N.F.L. kicker misses a 37-yard goal,” added Times reporter Josh Katz, who had to be rolling his eyes at the ridiculous notion that she could possibly lose..

A few hours later, the same newspaper ran a headline that says it all: “Donald Trump is Elected President in Stunning Repudiation of the Establishment.” The article goes on to describe Donald Trump’s victory as “a decisive demonstration of power by a largely overlooked coalition of mostly blue-collar white and working class voters, a powerful rejection of the establishment forces that assembled against him.”

Looks like we all underestimated the power of the white guy carrying his lunchbox to work, underestimated exactly how pissed off he is at the big fat deductibles he’s paying under Obamacare, the flood of immigrants with questionable loyalties, and the deals this administration has cut with untrustworthy middle-eastern countries. Though he lacks a Ph.D in political science, that much he gets.

There’s no mistaking the fact that this election is a stunning defeat of the liberal intelligentsia. Who assumed that, because they run the universities and media, support the symphonies and donate generously to liberal candidates that the election was in the bag. As one young friend posted on Facebook in the wee hours of Wednesday morning: “I was so isolated in my bubble with all my friends who thought just like me that I couldn’t see this coming.” Must be how Martha Coakley felt back in 2010. A sort of choral rendition of “This must be some sort of sick joke!”

And here is something you might find shocking. Scott Brown was only half right. It is the people’s seat, that’s true enough. But on a deeper level it’s really God’s seat and God will decide who needs to fill it.

Ivanka Trump must have had an inkling of this. Last Saturday night, with husband Jared Kushner, Trump (a convert to Judaism who now goes by Yael) made her way to a cemetery in Queens with the express purpose of communing with the Lubavitcher Rebbe, Menachem Mendel Schneerson. A powerful influence during his lifetime, 22 years after his passing, the Rebbe is believed by many to remain active in earthly affairs.

But even assuming such powerful forces at play, few could argue that this hasn’t been a painful and divisive campaign, a race between what many felt to be two sickening options. These last months have torn apart families and friends who either shot dirty looks and emails at each other or politely looked the other way, struggling to maintain some semblance of love and respect despite their divided allegiances. Good people reaching different conclusions on who’s the best (or at least not the worst) of these two candidates to lead the country and the world.

But for all the saber rattling he did to get through to his peeps during the campaign, a showing of strength known in Hebrew as gevurah (and nothing about it was pretty), Trump’s saber was nowhere to be seen in his acceptance speech, as he switched abruptly to the side of chessed – loving kindness.

“Now it’s time for America to bind its wounds of division,” he said at 3:00 Wednesday morning. “It’s time for us to come together as one united people. It’s time.”

Before the vote was in, I posted a quote on my FB page. “If you win don’t gloat. If you lose don’t despair.” So after the grieving comes to an end for all those who saw Trump as Satan with a comb-over or just a bad joke, let’s transcend our differences and work together to create a country and a world worthy of our children and grandchildren to inherit.

Now may the all-powerful G-d who gave him this victory give Donald Trump the strength and the wisdom he will surely need to do to job right.

Deborah Fineblum is a writer, editor and “LifeJourney Books” memoir coach based in Sharon, MA and Jerusalem

About the Author
Deborah Fineblum is an award-winning journalist and book author, publicist and writing coach.
Comments