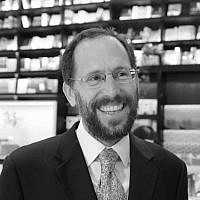 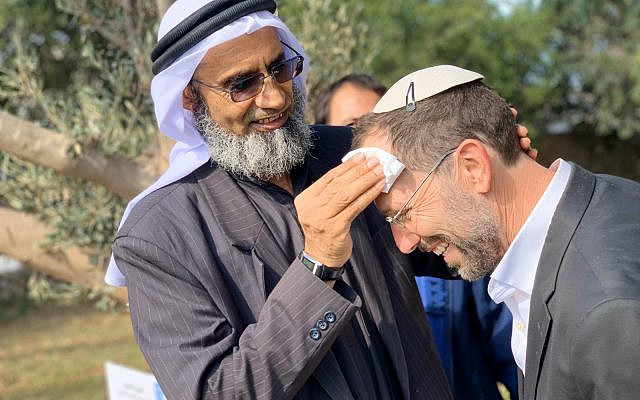 With Sheikh Jamel on Tolerance Day in Rahat. (courtesy)

“Healing occurs only when we look at the other face-to-face.” (Zohar)

Do we Jews in Israel truly wish for coexistence and mutual respect among all of Israel’s varied communities? If we do, we would do well to craft an appropriate response to MK Mansour Abbas’s groundbreaking speech. As head of the Islamic Movement’s Ra’am Party (United Arab List), Abbas reached out to the Jewish majority and called for partnership, tolerance, and careful listening between the groups. Without wading into complex political questions, there is a need for Jewish leaders to reach out to the Arab community in Israel with warmth and openness and welcome them to participate fully in building a society that works for everyone.

Such overtures can be difficult, stemming from profound differences in opinion between the groups and from each side’s criticism of the other. Still, if we wait for perfection, for the problems and complexities to disappear, we will find ourselves waiting forever. Let us start instead from the opposite direction: “Connection before correction.” This apt expression, which I learned in an interfaith convention in Jordan, teaches that change can come about when we emphasize connection and communication.

That said, many Jews distrust conciliatory speeches given by Arab leaders, suspecting that they are merely paying lip service to cooperation and masking their true intentions in order to achieve their political aims. It is easy to be cynical and wonder if their message in Arabic matches their friendly words in Hebrew or English. For many of us, it does not feel as though the other side is a genuine and sincere “partner.” But from years of personal experience with the Arab community, I can attest to their warmth and desire for connection with the Jewish community. Here are three pertinent examples, taken from my visits to Arab schools in Israel.

Kafr Qasim is the birthplace of the Islamic Movement and remains a stronghold of the organization today. I visited the comprehensive high school there two weeks ago, at a recognition ceremony for students who participated in volunteer activities to help during the COVID-19 period. The students were touched that a rabbi had come, and every student awarded a certificate also had their picture taken with me. While there, I discussed the problem of religious violence with my friend Sheik Iyad Ammar, who is both the principal of the school and the Imam of Kafr Qasim. He shared with me that when he delivered a sermon after the murder of Esther Horgan, he vigorously denounced the murder and declared to those assembled at the mosque that such a heinous act could never be Allah’s will. His speech followed in the footsteps of his teacher, Sheikh Abdullah Namir Darwish, who founded the Islamic Movement in Israel and publicly condemned terror attacks.

A second example, from the city of Rahat, whose comprehensive high school is the largest Arab school in the south, with over 1000 students: Before the COVID-19 outbreak, my friend Sheikh Jamal al-Ubara initiated a “Tolerance Day” there and invited me to participate along with representatives of the other three Abrahamic religions: Muslims, Christians, and Druze. We visited every classroom and spoke out against violence, in the name of our faiths. We also led discussions with the students about mutual respect among the religions. The principal met with the twelfth graders and shared with them his opinion that what is important to God is not primarily which religion you belong to, but how you choose to behave and live. At the end of the event, we planted a giant olive tree at the entrance to the campus, and I was given the honor of putting up the sign next to the tree. Unfortunately, when I got up I bumped my head on a branch and was slightly injured. Sheikh Jamal quipped, “Uh oh, when people see you they’ll say, ‘Look what happens when you go to an Arab city!’”

On another visit, this time to an Arab school in the Galilean village of Kafr Rama, I asked the children if they could answer a question that has bothered me for some time: Israel is so small that its name doesn’t fit on maps of the Middle East. Its land is geographically insignificant. And while the number of people killed and injured due to the Arab-Israeli conflict looms large here, it is negligible compared to conflicts in other regions. If so, why is the whole world focused on this tiny area of the globe? The children answered simply, “Everyone knows that everything started here.”

Indeed, the Abrahamic religions, which are all inspired by events that took place here, in the land of Israel, over 3,000 years ago, account for the majority of the world’s population. The children of Kafr Rama spoke about the past, but we can complete their thought: In the very place where it all started, we must look for a way to tackle today’s challenges.

I believe that among both Jews and Arabs, “partners” do exist, people who believe that despite our differences and our disagreements we can forge a path to coexistence and mutual respect. But we need more such people, many more. Join us!