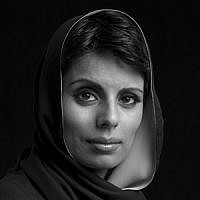 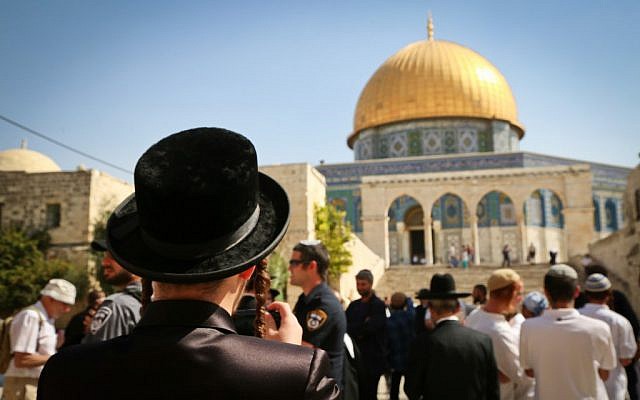 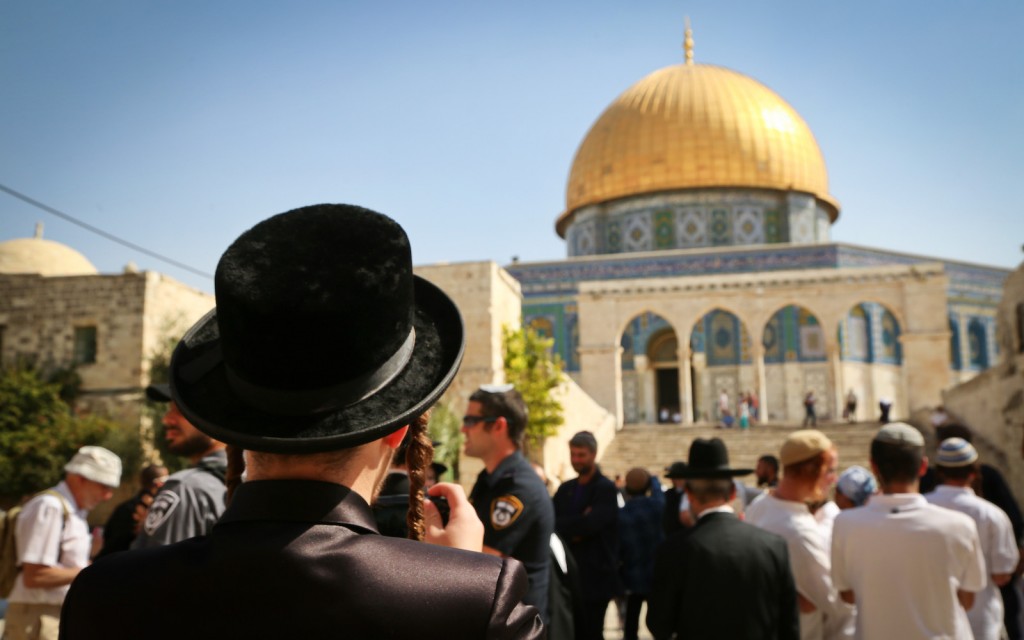 Jews visit the Temple Mount compound, site of the Al Aqsa Mosque and the Dome of the Rock in Jerusalem, during the Jewish holiday of Sukkot, October 8, 2017 (Flash90/Yaakov Lederman)

The Eternal City may never have been more contested than it is today. As many across the globe continue to challenge Israel’s right to claim Jerusalem as its capital, US Vice President Mike Pence‘s delicate visit to the Middle East came at a critical time.

Palestinian rhetoric, triggered by US President Donald Trump’s announcement to move the US Embassy there from Tel Aviv, has been magnified by the President’s recent decision to sever $65 million in US aid to the Palestinians. Elsewhere in the region, the leaders of Egypt and Jordan, staunch US allies, must acknowledge Palestinian outrage without alienating the United States.

In his 2011 book, Jerusalem: The Biography, historian Simon Sebag Montefiore captures the theological mystery within which Jerusalem remains suspended, describing it as “the house of one God, the capital of two peoples, the temple of three religions, and she is the only city to exist twice — in heaven and on earth.”

But as a believing Muslim observing Islam, I am compelled by the Quran to support Israel’s sole claim to the Holy Land; the Quran says it is so.

The 80,000-word document 1.6 billion Muslims accept as the revealed word of God, the Quran, is categorical about the destiny of Israel and the people who can claim its ownership.

The Quran states: “Moses said to his people: O my people! Remember the bounty of God upon you when He bestowed prophets upon you, and made you kings and gave you that which had not been given to anyone before you amongst the nations. O my people! Enter the Holy Land which God has written for you, and do not turn tail, otherwise you will be losers.”

It is this Islamic truth that political Islamists vehemently deny.

Those who masquerade as Muslims

Fast-forward 1,300 years to the 21sth Century and we find totalitarian Islamism – profoundly distinct from Islam – ensures a new anti-Semitism courses through the Muslim psyche.

Today’s Islamists cry ‘Islamophobia!’ when challenged on their ideology, arguing that calling it political totalitarianism amounts to anti-Muslim racism and bigotry. Indeed, the notion of Islamophobia is becoming so powerful a social construct that it is chilling public discourse even for Muslims who dare expose Islamism.

It is these convulsions that have shaped the global outcry against Jerusalem’s destiny as Israel’s capital. This outcry is not confined to Muslims but is spread throughout the wider world, as many glorify Islamists as a persecuted religious minority rather than the totalitarians they are.

In the process, those naïve of Islamism condemning the designation of Jerusalem as Israel’s capital (in the belief they are advocating for Palestinians), become willing instruments for an explicitly fascist ideology, an Islamism that seeks not an accommodation, or parallel statehood to Israel, but its figurative and literal annihilation.

In the Palestinian territories, as in many Muslim majority societies, Islamism is effectively ‘the other occupier’ -– confining freedom of thought, critical analysis and educated scrutiny of Islam.

It’s time Muslims examined this other occupation of Islam by Islamism. In the guise of advocating for the Palestinian cause, many conceal or find socially accepted release for rabid yet sanitized anti-Semitism.

Unsurprisingly, arch-Islamists Hamas and Hezbollah, masquerading as Muslims, quickly announced ‘the Gates of Hell’ were to open in response to Trump’s recognition of Jerusalem as Israel’s capital. Hamas preachers in Gaza called for Palestinians to ‘rise up and stab Jews’.

One Muslim commentator echoed the sentiments of millions of Muslims around the world when he dismissed the Quranic declaration of Israel as the promised land for the Jews as irrelevant claiming, “The Quran is not a historical document.”

This is how far we Muslims have strayed.

Muslims in fervent anti-Semitism have abandoned all memory of what is confirmed as beloved and revered to us — the Torah and its followers, Moses and his message, and God’s own promise to his followers of sanctuary in a Promised Land.

This renunciation of what the Quran tells Muslims is an uncontestable truth today. Theological destiny for the Jews is at the root of the Middle East conflict; whether as Jews it is pursued, or by Muslims, it is denied.

The Holy Land which God has written for you

The Israel-Palestinian conflict is neither about politics nor Zionism, neither about borders nor land or water. It is not even about the fate of statehood for the Palestinians. It is about the central denial of an Islamic truth: the denial that the Jews are indeed People of the Book, that their path to God is divine and righteous, and that they are indeed, by divine writ, the inheritors of the Holy Land.

The scholarship of Islamic scholar Professor Khaleel Mohammed, professor of Religion at San Diego State University and member of SDSU’s Center for Islamic and Arabic Studies is essential reading at this time. He writes that the Quran decrees that the Holy Land is destined for the Jewish people. He points out the Quranic use of the word, “written,” as it conveys “finality, decisiveness and immutability.” No mortal can overturn what has been written for another.

Muslim Author Tarek Fatah has noted in his 2010 book, The Jew Is Not My Enemy: Unveiling the Myths that Fuel Muslim Anti-Semitism, that the use of ‘written’ as divine and irrevocable decree occurs 22 times in the Quran.

Few Muslims may realize Moses is the most often mentioned figure in the Quran, mentioned more often than even the Prophet of Islam. The Quran portrays Moses as a great Messenger who displayed courage in the face of fear, overcoming his own vulnerabilities.

Cosmic anti-Semitism (anti-Semitism pursued as a divine mission to combat a cosmic, not mortal, enemy) is kingpin to Islamist ideology. Islamism – a political totalitarianism masquerading as Islam – religionizes anti-Semitism, rendering the hatred of Jews as religious creed and perverse marker of devotion among Islamists today. In doing so, Muslims add to the ferocity and fanaticism of anti-Semitism, granting it dangerous –if false — religious legitimacy.

Lacking critical knowledge, and access to Islam free of Islamism, faith-illiterate Muslims (including the Middle East and North Africa Region and Western Europe) accept anti-Semitism as Islamic creed. All too often, the rest of the world follows suit.

It is only a short step to Holocaust denial which has also a marked presence in the Muslim majority world. More than 51 percent of Muslims surveyed said they believe the scale of Jews murdered in the Holocaust is greatly exaggerated. In the Middle East North African region this rises to 63 percent.

Islamists use Holocaust denial to garner grassroots support for delegitimizing Israel and to recruit Islamist “foot-soldiers” who are terrorist collaborators or operators. Because the Holocaust “wasn’t real,” Islamists argue, the state of Israel was created on “false pretenses.” Seeking de-legitimization with a view to full destruction of Israel quickly gains legitimacy.

This is the progeny of 20th century anti-Semitism mating with Muslim sensibilities. During Adolf Hitler’s rule over Nazi Germany, seeking to mobilize Muslim support for the Third Reich in the Middle East and North Africa, Nazi anti-Semitism was readily inoculated into the Muslim psyche and then expertly fomented by Arab nationalists as an instrument to reject European colonialism in the region.

Modern day Islamism – birthed by the Muslim Brothers in 1928 Egypt — has since incorporated a new anti-Semitism, a lethal genocidal hatred for all Judaica, all Jewry and Israel as a central tenet of belief. This blinds Muslims with a religionized anti-Semitism that prevents us from seeing that Islam has mandated Israel and its capital for the Jews.

As Muslims, we can be blind no more. Islam demands, we must see what is written.

Dr. Qanta A. Ahmed, MD, is a British American Muslim, author of In the Land of Invisible Women,member of the Council on Foreign Relations, and Next Generation Council Member of the University of Southern California’s Shoah Foundation Institute for Visual History and Education. @MissDiagnosis