The Blogs
Laura Wharton
Jerusalem City Councilor, adjunct lecturer in political science
Apply for a Blog
Please note that the posts on The Blogs are contributed by third parties. The opinions, facts and any media content in them are presented solely by the authors, and neither The Times of Israel nor its partners assume any responsibility for them. Please contact us in case of abuse. In case of abuse,
Report this post. 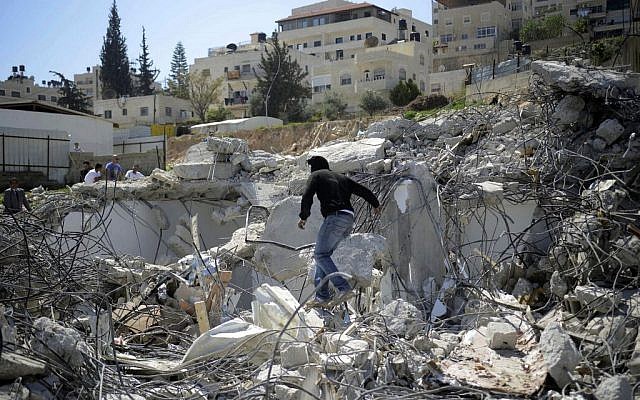 An illustrative photo of a Palestinian man climbing on rubble left after a house was demolished in the East Jerusalem neighborhood of Al-Tur on March 26, 2014, on the grounds that it was built without a construction permit. (Sliman Khader/Flash90)

Celebrating the unification of Jerusalem is like celebrating that the earth is flat. Both were popular ideas but run contrary to fact; any straightforward examination disproves them. In this year’s budget, twenty-five million shekels have been allocated by the municipality to celebrating fifty years since the city’s “unification”, a scandalous sum meant to try to convince the public something utterly false.

Three hundred and thirty thousand Moslem Palestinians without Israeli citizenship live in East Jerusalem.  Less than 2% of the eligible voters turned out in the last municipal elections, in which they could participate but chose not to out of a rejection of the Israeli occupation and unwillingness to render it legitimacy. Only a few hundred voted for the mayor. In contrast, in West Jerusalem turnout ranged from 40-80%.

More than eighty percent of the Palestinian East Jerusalemites live under the poverty line, including more than eighty-five percent of the children. On the far side of the wall that Israel built, but within what Israel declares to be the city boundaries, there has been long-term neglect of basic infrastructure  which has resulted in chronic stoppages in the provision of water, serious sewage problems, and ongoing irregularities in garbage disposal. Appeals to the Supreme Court have been the only means to force the municipality to fulfill its minimal legal responsibility in these and other areas. While the municipality has been building state of the art sports facilities and swimming pools for Israelis in West Jerusalem it has failed to even pave roads in East Jerusalem. While spending public funds on such frivolities as imported Italian race cars for public display in the center of town, the current mayor has failed to build classrooms and health centers in East Jerusalem and is now facing charges of contempt of court for not upholding his promises to provide these basic needs. While Jerusalemites in general tend to be poor, West Jerusalem poverty figures put them at approximately half the percentages found in the East.

The divide is not simply a matter of grave budgetary distortions. Deep animosity  has developed as a result of five decades of injustices in the management of the city as well as spillover from the  fears and tensions stemming from the surrounding Palestinian-Israeli conflict and the dreadful concommitant violence. Israelis rarely venture into East Jerusalem neighborhoods and most are utterly unfamiliar even with the names and locations of the Palestian neighborhoods or villages that Israel has annexed. Municipal workers are generally instructed not to venture into East Jerusalem, and if so — not in cars marked with the city logo. The mayor only enters East Jerusalem in an armored vehicle with a substantial security escort. East Jerusalemites, for their part, are increasingly unlikely to spemd time in West Jerusalem except what their work requires: polls have shown that since the kidnapping and murder of a young Palestinian several years ago, as well as a large number of racist attacks since then, the overwhelming majority of East Jerusalemites avoid the city center and West Jerusalem neighborhoods.

Close to 100% of Palestinians live in Palestinian neighborhoods that every peace proposal ever put on the table expects will be part of Palestine. Close to 100% of Jerusalem’s Israelis live in Israeli neighborhoods that will clearly remain in Israeli sovereignty after any peace agreement. Only small fringe groups of extemist Israelis have thus far moved into Palestinian neighborhoods at huge cost of private security, financed mostly by the government and in part by the municipality. Anyone familiar with the facts on the ground knows that Jerusalem has remained divided in all but name.

The show of a united city presented by the mayor and the current government is a farce easily exposed. There is shared space in Jerusalem that should be negotiated over in order to make the city a more viable and just entity, serving all of it its inhabitants. It is a pity that instead of addressing the very serious and pressing issues that the inhabitants, the city and the country face, great effort – and expense – is spent on a promoting a hoax.

About the Author
Dr Laura Wharton is a member of Jerusalem's City Council as a representative of Meretz and an adjunct lecturer in the political science department at the Hebrew University of Jerusalem. Born in the U.S., she immigrated to Israel after receiving a B.A. in the government department of Harvard University and then served a full term in the Israel Defense Forces. She subsequently completed an M.A. and a Ph.D. at Hebrew University. For research that later served as the basis for her book "Is the Party Over? How Israel Lost Its Social Agenda" (Yad Levi Eshkol, 2019) she was awarded the Prime Minister's Prize in Memory of Levi Eshkol. She is a mother of two and has been living in Jerusalem for more than two decades.
Related Topics
Related Posts
Comments