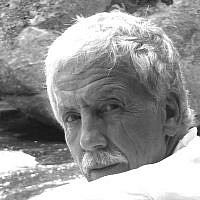 The Blogs
Joe Zias
Apply for a Blog
Advertisement
Please note that the posts on The Blogs are contributed by third parties. The opinions, facts and any media content in them are presented solely by the authors, and neither The Times of Israel nor its partners assume any responsibility for them. Please contact us in case of abuse. In case of abuse,
Report this post.

Jerusalem’s vast number of ancient tombs have always been a source of  important archaeological information concerning those historical  personages to whom one is in debt.  Unfortunately while they provide a wealth of information they are often scientifically and historically abused for political, religious and financial gain. While many readers are familiar with tombs of Jesus, three to date, depending on who is counting, there are other tombs of questionable authenticity currently being bandied about, which I would like to point out in this essay.

In 1971, some four decades before today’s ‘press conference archaeology’, a first century Jewish tomb was accidently discovered, in  Giv’ta Ha-Mivtar,  the same  Jerusalem  suburb where in 1968 the first and only direct evidence for crucifixion has been uncovered.  Dubbed the Abba tomb, due to a very intriguing tomb inscription, written in Paleo-Hebrew script, there arose wide speculation as to whom the enigmatic inscription actually was referring to, which until today,  goes on.  The inscription reads as follows:

I Abba, son of the priest E/leazar, son of Aaron the high (priest), I, / Abba, the oppressed and the parsec/uted, who was born in Jerusalem, / and went into exile in Babylonia and brought (back [to Jerusalem]) Mattath/iah son of Juda(h), and I buried him in the c/ave, which I acquired by the writ.

At first glance it would appear that Abba, the owner of the tomb may have been referring to the human remains of Mattathias Antigonus, the last ruler of the Hashmoneans, killed by the Romans in 37 BC.  However, such turned out not to be the case.

The human remains found in one of the beautiful, undisturbed ossuaries were first believed to be those of an adult male, whom had been beheaded, as described by the Jewish historian Josephus . (Antiquities, XV 1:2 (8-9) There was immediate speculation among forensic anthropologists that this aging and sexing may have been flawed. LY Rahmani, the then chief curator for the State of Israel asked for a second opinion from, a prominent Hadassah medical school, forensic anthropologist.

Her conclusions after viewing the remains were in original agreement that the individual had indeed been beheaded, however what had been regarded as a male in his 30’s, she now concluded, were the remains of an elderly female.

Faced with two contradictory opinions and the possibility that we may see the tomb declared a important burial place for a historical figure mentioned in ancient sources, the remains were sent to a third individual in Denmark who concurred with all forensic anthropologists , that the remains were but those of an elderly female whom had been beheaded.

We thought that was the end of the story until some years later when I received a phone call from the owner of the apartment, who informed me that there was a chamber under the tomb floor which had been overlooked by the Israel Antiquities Authority. I was somewhat skeptical concerning his story as the tomb had been cleared by an experienced archaeologist and asked for more details. Had I not once known the owner, I would not have believed the following story.

According to the owner, planning to enlarge the tomb beneath his apartment, a friend believing in mysticism convinced him to first take an earthen sample to a blind, mystical ‘seer’ in Bethlehem before he would undertake any changes. According to the owner, the ‘seer’ whom I later met, informed him that there were additional artifacts in the tomb which the archaeologist had inadvertently missed, ‘return home and begin searching’ were his words, which he did. As the ‘seer’ had prophesized, the owner now discovered an underground chamber which the archaeologist unfortunately had missed during the 1971 clearing operation and therein lay an ossuary which needed to be examined.

Perhaps this was the now missing evidence which had been hoped for, hidden away beneath the floor for over 2,000 years.  I immediately called my adviser, informed her of the discovery and we decided to come after dark, due to ongoing problems with the haredim whom were making forensic research difficult for all of us, scientifically  examining ancient skeletal remains.

Beneath the tomb floor in one corner was, as the owner had promised, an ossuary, untouched since the first century CE.  In a way I had hoped that perhaps we would now discover what others had been looking for, an adult male in his 30’s , whom had been beheaded.

The skeletal remains in the beautifully decorated ossuary were in excellent condition, lying undisturbed for 2,000 years.  Unfortunately within a minute or two we were disappointed; no signs of trauma whatsoever appeared on the human remains. We replaced the ossuary lid, reported our findings to the tomb owner, who appeared a bit disenchanted, and departed.

Postscript: A few years ago while working as an advisor for a documentary on Jerusalem tombs, the film director having heard about the Abba tomb,  asked if I knew its location.  As I knew the owner by name, I phoned the owner and asked for a short meeting in order to film the empty tomb, which I had not visited in over 20 years. Much to my surprise, the formerly secular owner, warmly greeted me dressed in black and white, bearded, it was clear that over the passage of time, he had become a member of the ultra-orthodox  community whom demographically were now in the majority.  We shortly discussed the find which I thought, aside from the inscription on display in the Israel museum, was but a footnote in the history of Jewish tombs. He now emerged from a back room with a thick file in which it became clear that over the years, he had somewhat successfully attempted to turn the site into a site of pilgrimage, similar to the tombs of ‘important rabbis’  in the Galilee which sprout up like spring flowers, something which LY Rahmani was determined for historical/scientific reasons to prevent.

The owner, who set up a non-profit  and I now descended to the tomb beneath his flat; I immediately found the exterior unrecognizable as he had invested a considerable amount of time and money for ease of access for those coming to visit, the so-called, Abba, tomb of The Last of the Macabbeans.

For those wishing to believe, it may well be the tomb of Antigonus the last ruler of the Macabbean dynasty, killed by the Romans in 37 BCE. And who could doubt the blind Bethlehem darwish who ‘saw’ the hidden niche containing the second ossuary?

However for those wishing to know, despite recent media attempts to portray it as such, it’s a typical Jewish tomb, with an interesting inscription and the skeletal remains of an elderly woman, whom had been beheaded, nothing more.

About the Author
Joe is a retired curator of archaeology/anthropology with the Israeli government.
Related Topics
Related Posts
Comments