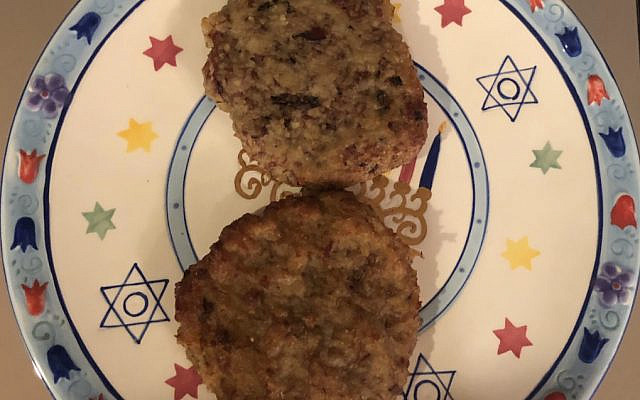 Happy Chanukah or Hanukkah, depending on where you live and what you call the Jewish Festival of Lights and fried foods. Only recently, thanks to advanced communications, have Jews from around the world been able to add hare the story of the miracle of oil, which leads to the joy of eating fried foods. Today, donuts, assorted vegetables and even a deep fried turkey take center stage of menus.

But, nothing comes close to eating potatoes this holiday. Every variety, even sweet and yams are used in latkes. The word latke comes from the Yiddish word meaning grated.

I personally joke that grated translates into grateful, as in grateful for eight days of parties with friends and family and grateful that we can joke that Hanukkah is a time when calories don’t count, and neither do the endless possibilities of creating a pancake.

For my non Jewish friends, latkes are perfect for Christmas. What elegant party doesn’t include on the menu a mini potato pancake with caviar and crème fraiche?

Eating potato latkes is easy, but getting someone to try and fry the perfect pancake is another story, until now.

There are no excuses not to try to eat a variety of fried potato latkes.

Potato latkes are found in every kosher style deli and supermarkets everywhere. Many nights when I am in a rush, I buy kosher ones in national outlets like Trader Joe’s or online. 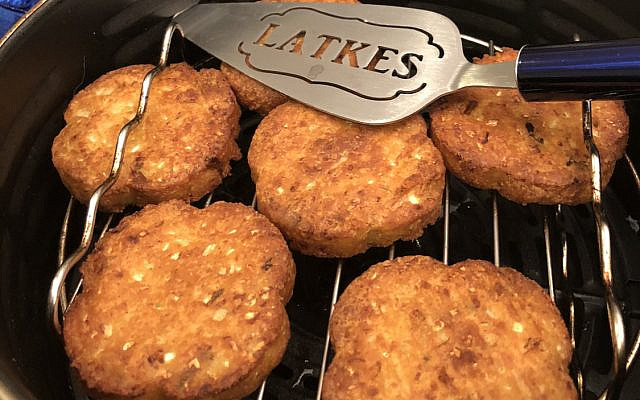 Photo of a Trader Joe’s Latke in an Air Fryer
Photos: Grosz

Intimated to cook from scratch. There are brands like Streits and Manischewitz that sell mixes that are kosher and use traditional ingredients that make preparation easy. Follow simple instructions which usually involves the mix, an egg and some oil and the hardest part is not eating the finished product and burning your tongue because they smell so good, that you can’t wait for them to cool down before you taste.

However, so many want true homemade recipes, just like Hanukkah celebrators ate in Europe a century ago.

The best latkes share a similar base and depending on how creative you are, you can create your own version:

1 cup canola oil or chicken schmaltz, or a combination of both

Prepare the potatoes. Scrub the potatoes well, but do not peel. Cut each potato in half crosswise.

Toss the latke ingredients together with your fingers. Add the potatoes, onion, eggs, matzo meal or breadcrumbs, salt, and pepper to the bowl of starch. Mix with your fingers, making sure that the potato starch breaks up and is evenly distributed with the rest of the ingredients. Set batter aside for 10 minutes.

Heat the oil. Place the oil or schmaltz (or a combination of the two) in a large skillet so that when melted there is a depth of 1/4 inch (for a 10-inch skillet you’ll need 1 cup of melted oil/schmaltz). Heat over medium-high heat until a piece of the latke mixture sizzles immediately.

Form latkes one at a time. Scoop 1/4 cup of the mixture onto a fish or flat spatula. Flatten with your fingers to a 4-inch patty.

Drain the latkes. Transfer the latkes to a paper towel-lined baking sheet to drain for 2 minutes.

You can also skip the heavy fry and spray with oil and shape for baking or air fry machines.

Latkes are so versatile that you can substitute them instead of rye bread for your traditional brisket sandwich or serve leftovers for breakfast with your omelet instead of hash browns.

You don’t have to be Jewish with Cindy or to enjoy a latke, and they can be eaten for the miracles we have everyday.

About the Author
Cindy Grosz is The Jewess Patriot, Today’s Premiere Jewish Activist syndicated through Conservative Television of America, Real Talk Radio and the Black and White Network. The show streams through RokuTV, Amazon FireTV, iHeart, Spotify and Deezer and out of Israel through Jewish Podcasts. She is the chair of Jewish Vote GOP and a Jewish advisor for many 2022 candidates. Her lawsuit against the NYCDOE exposes scandals and corruption within public schools and discrimination against Jews. She also writes about entertainment, food, culture and social issues.