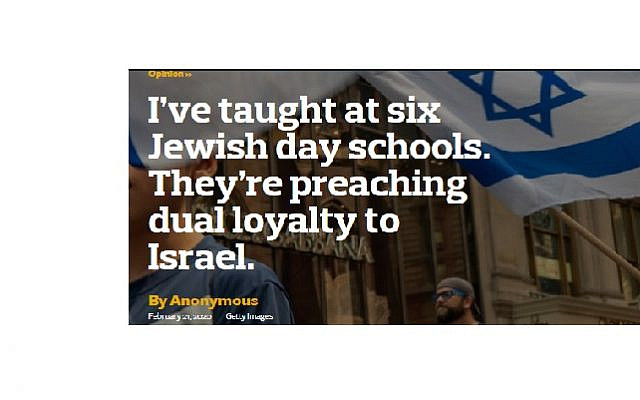 Screenshot of an Antonymous Teacher's Op-Ed in The Forward

I’ve read the anonymous teacher’s essay in The Forward that accused Jewish day schools in America of teaching dual loyalty and I couldn’t disagree more. Ironically, I’m an Israel advocacy educator flying from Israel to America to chaperone more than 100 Jewish teenagers to AIPAC’s Policy Conference. I currently teach – virtually from Israel – in three different Jewish day schools and one youth group in America.

Over the course of my twenty year career I’ve taught in over ten Jewish day schools. I’ve visited and observed over 20 other Jewish day schools during my career. The close to three thousand visitors in my home each year come from just about every Jewish day school and youth group in America. With my experience and exposure I have an expert handle on Jewish day schools, Israel education and I can state unequivocally that the anonymous teacher didn’t accurately report the truth.

The anonymous teacher’s error can either stem from getting the facts wrong or perceiving the facts incorrectly. “Anonymous’s” account didn’t seem falsified. Jewish day schools sing Hatikvah, they have Israeli flags hanging, Israeli soldiers visit and speak and students frequently wear Israeli flags and IDF paraphernalia. The error stems from anonymous’s perception of what motivates the love of Israel.
“It’s a huge problem that Zionism is messaged as the most essential attribute of our students’ identity,” anonymous wrote, yet that’s not true and isn’t as problematic as anonymous makes it seem. The writer comes with an approach a step past President Trump’s “America First” and demands “America Only.” Zionism appeals to so many Americans, including Presidents such as Lincoln, Wilson, Truman and Clinton, because its philosophy shares so many of the same values as America.

To be a loyal American doesn’t mean abandoning your heritage, it means including it in the melting pot of collective America. The rebirth of the Jewish state has allowed Jews to bring its historic connection to Eretz Yisrael through modern Medinat Yisrael into America. Just as Irish-Americans celebrate their heritage with a St. Patrick’s Day parade and Chinese-Americans celebrate with a parade on the Chinese New Year, American Jews celebrate Israel Independence Day with a State of Israel Day parade. Just as the Irish and Chinese aren’t thought of as having dual loyalties for celebrating their heritage, Jews shouldn’t be accused of dual loyalties for celebrating Israel. Anyone who maintains that double standard is nothing but an antisemite.

For the anonymous teacher to think that all non-Jewish staff in Jewish Day Schools think that Jews maintain dual loyalties is to assume they are too ignorant to understand the Jews around them. To maintain the same position themselves – which I suspect “anonymous” does – is to falsely vilify one’s own people with some of the worst antisemitic tropes.

Why would the anonymous teacher choose to assume the worst of their own schools, communities, administrators and students? I have to assume this teacher is anti-Zionist and belongs to the new anti-establishment that prefers to keep Zionism out of the Judaism they teach. They’re no more proud to be American than I am. They use loyalty to America as a vehicle to attack Zionists. This anti-Zionist crowd doesn’t appreciate the gift and opportunity of a Jewish state. They are resentful and bitter. Their resentment causes them to lash out with false demonizations like the oped anonymous wrote.

In a recent semi-final soccer game against a non-Jewish school, a school where I teach Israel education in Miami, proudly sang Hatikvah and the star spangled banner. They celebrate Veterans Day, Thanksgiving and Martin Luther King Jr. Day. As an Israel advocacy teacher I follow AIPAC’s example that a love of Israel is a reflection of a love of America. An attachment to the state of Israel doesn’t contradict a love of America, it enhances it. America and Israel are strong allies because they share values and celebrate each other. There is room in every American’s heart for America and the allies that share its values, like Israel.

One last word. Israeli-American film director Rod Lurie said, “Sometimes, anonymous sources, when merely stating opinions or a smear campaign, are certainly cowards.” This op-Ed by the anonymous teacher is one of those times. As educators we don’t merely lecture, we must stand for our principles. Educators lead by example. We aren’t two faced and don’t preach what we don’t practice. Students quickly see through educators who live two faced lies. By insisting on writing anonymously in order to keep their job, this teacher did a disservice to their students. “Anonymous” lacks the courage and moral fortitude that is a basic requirement for educators.