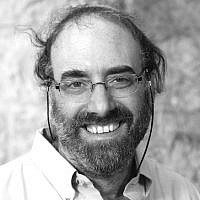 The Blogs
Shaiya Rothberg
Apply for a Blog
Please note that the posts on The Blogs are contributed by third parties. The opinions, facts and any media content in them are presented solely by the authors, and neither The Times of Israel nor its partners assume any responsibility for them. Please contact us in case of abuse. In case of abuse,
Report this post.

The People Israel encamped around the mishkan (tabernacle) in the Sinai desert is one of the most powerful images in the holy story. First, there’s the awe of the desert: when you behold it, its immensity rings with the words you are so small that I can’t even feel you, and its expanse seems to open up a great space right inside your head. 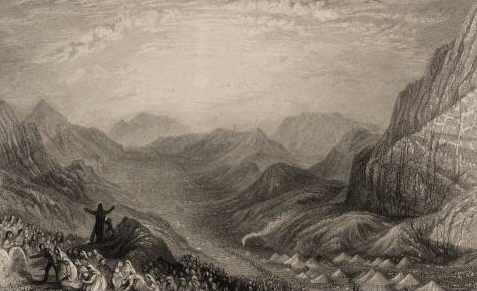 Encampment of Israelites Mount Sinai, as in Numbers 33:15, intaglio print from “Landscape illustrations of the Bible” by Joseph Mallord William Turner (1775-1851). 1836. Public Domain.

As an ancient Israelite, you are not alone in the desert but one of a great number; the multitudes of Hebrew slaves freed from human bondage in Mitsrayim. Now you cross the wilderness to inherit the promised land of your ancestors. With the holy of holies at the heart of the desert encampment, you see the tents of your sisters and brothers in every direction, until they fade into the reddish rocky hills and tan sands of the expanse-without-frame all around. 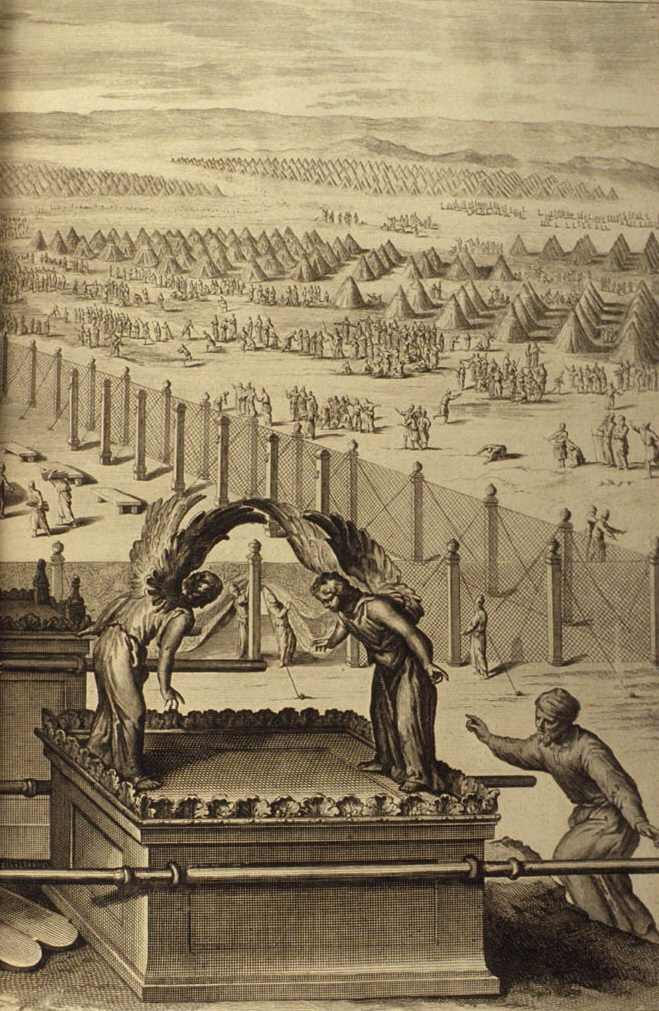 The awe of the desert is overcast by your awe of the Shechinah, the revealed presence of God, manifest in the midst of the Israelite nation. You stand in the presence of divinity revealed, that which you know with everything you are – feeling, intuition, reason and emotion – is worthy of your absolute faithfulness. In the rhythm of sacred words, in the textures of metals and cloth, in the shapes of the holy vessels, you feel the visceral presence of that which is infinitely more important than your own life. The living God dwells inside the Tabernacle.

Here the camp is portrayed in a calm mood: 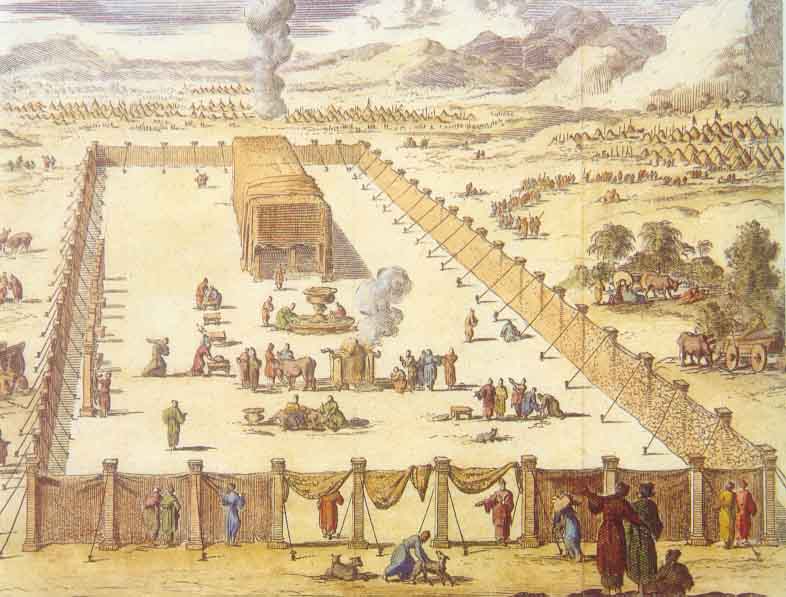 Here it gets more dramatic! 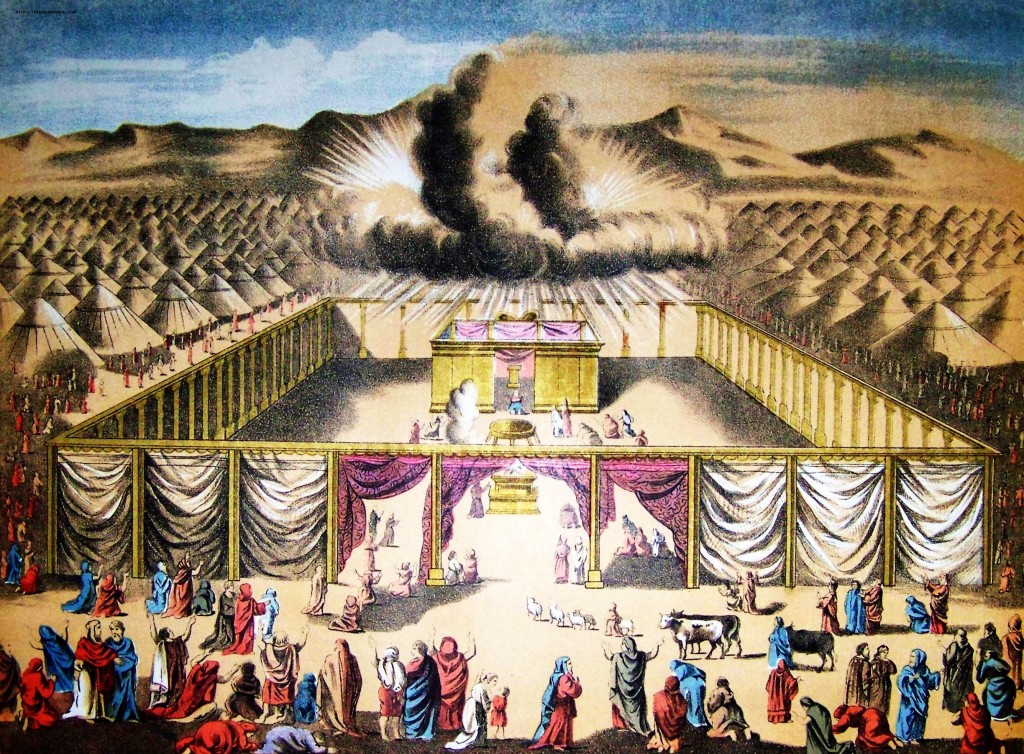 The Tabernacle in the Wilderness. Illustration from the 1890 Holman Bible. Public Domain.

And this is my favorite: 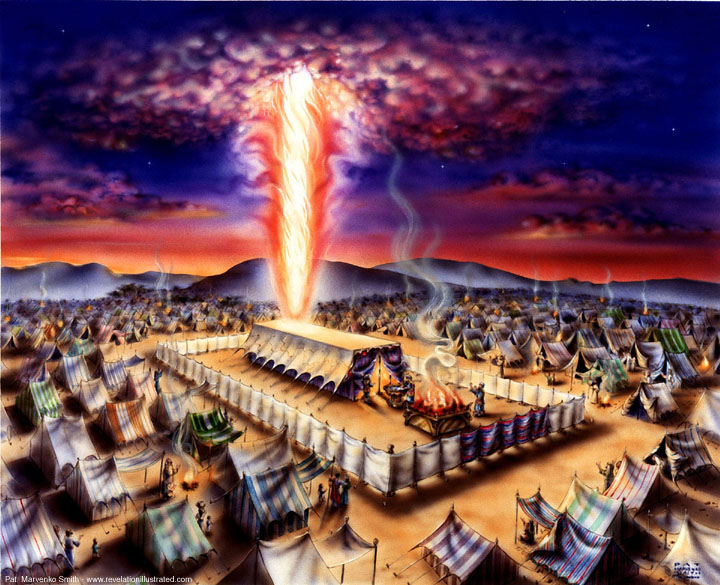 Tabernacle at Sunset – Art by Pat Marvenko Smith, copyright 1992. Used in keeping with copyright instructions on site (linked to image)

When we speak to each other about politics, we step into the shoes of Moshe and Yitro, who struggled with questions of justice at the very beginning of the Jewish project (Exodus 18:14-27). What should government be like? How should the legal system work? These are the foundations upon which we build a human collective in the light of the Divine Ideal that was revealed to our prophets and sages; a kingdom of priests and a holy nation. There is no holiness without justice and there can be no justice, and no good government, without loving free open-minded debate.

That sounds easy enough! But then comes the real world in which everything is at stake. Our lives; our husbands, wives and children; our homes; our name in the world as Jews and as Israel; the meaning of Torah; justice and oppression; the survival of our people and of the species. There is real horror: the children of our people are murdered in our streets; people die or are maimed, terrible injustice is wrought upon thousands. We become terrified and filled with rage. Fear and anger produce hate. We try to figure it out, figure out what we need to do, but others reach conclusions that contradict ours and so each side watches the other as it undermines what’s most important with its dangerous words and behavior. The public discourse of the Jewish body politic wanes acrimonious, irrational. In Israel and abroad, our frequent failure at respectful dialogue weakens the foundations of the nation.

It’s no big surprise. Today’s international order should be understood as part of the barbaric pre-history of human civilization. We live in a global reality of unfathomable cruelty and injustice. We are a stiff-necked species, and while there has been progress, we still refuse to use our immense resources to redeem humanity from poverty and oppression. In this reality, when the human race is so broken and down-trodden, it’s no wonder that we can’t pull it together. Like all people in crises, we sometimes give in to anger and fear, and so lose communication with the world, and with each other.

Everything was at stake for the Israelites in the desert, just like it is for us now – the Israelites in the Holy Land. They fought hate, fear, war and death, just like we do. They struggled to climb high even as sometimes the earth opened up to swallow them from below. They lifted their eyes to the guidance of God. Where is our divine guide today? Where are the pillars of cloud by day and fire by night to lead our encampment out of danger and forward on its divine mission? We are the People of the Book, and lacking physical pillars of cloud and fire, we can build them out of words; holy words that are too grand to fully grasp but that can shed light on a dark way.

Roughly a thousand years ago, an unknown sage bequeathed to us a guiding pillar made out of words.

To love every one of Israel a soulful love…as it says “and you will love your fellow as yourself”. And…”that which is hateful to you do not do to your fellow”…Said Rabbi Akivah, “this is a great principle of Torah”, many commandments depend upon it…

And one who behaves with her fellow in the way of love and peace and friendship and seeks her benefit and is happy in her good fortune, about she it is written (Isaiah 49:3) “O Israel, in thee I will be glorified.”

And this Mitsvah applies in every place and at all times…

The words of Sefer Hachinuch can teach us many things, but there is one point particularly important for the subject at hand. He says, “And one who behaves with her fellow in the way of love…about she it is written,

‘O Israel, in thee I will be glorified

In the spirit of the Zohar, I suggest that we read “in thee” hyper-literally: that is to say: God – when being glorified by our love – is actually dwelling amidst the Israelite nation. When we engage in loving and respectful dialogue – even when facing harsh criticism – then God dwells among us, glorified, and Jewish public discourse becomes holy space.

About the Author
Shaiya Rothberg lives with his wife and sons in Jerusalem. He is a teacher of Jewish Thought and a human rights activist. Shaiya holds a PhD from Hebrew University in Jewish Thought and a B.A. in Jewish Philosophy and Talmud from Bar-Ilan. He made aliyah in 1988 and served as a soldier and officer in the I.D.F. from 1990-1993 in the military government of the Gaza strip.
Related Topics
Related Posts
Comments