Voting for the UJS President is now open. It closes on 9 December at 12pm.  There are three candidates. Eran Cohen, Joshua Holt and Adam Schapira.

Eran Cohen is openly anti-Zionist. The Palestinian societies that intimidate Jewish students are publicly campaigning for him.  Cohen is effectively putting two fingers up to the vast majority of the UK Jewish community which is pro-Israel. 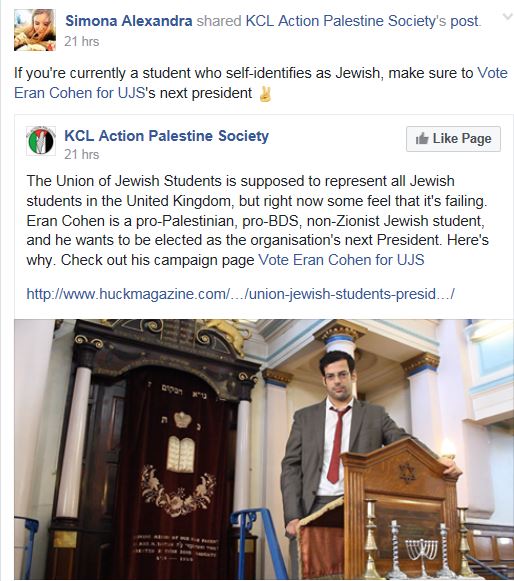 Not only is Cohen an anti-Zionist, he has a history of BDS activism. He was BDS officer for the University of York’s PSC and he promoted “Palestinian Apartheid Week” at the university. In February 2016 he co-produced and acted in the PSC’s production of Seven Jewish Children. This is an antisemitic play. I was the first person to review it.

JC drama critic John Nathan said “For the first time in my career as a critic, I am moved to say about a work at a major production house that this is an antisemitic play.”

Cohen does not accept the EUMC definition of anti-semitism, because it states that it’s anti-Semitic to deny the right of the Jewish State to exist.

Cohen is supported by ‘Jewdas’.  Jewdas is a tiny group of anti-Israel narcissistic Jews who attempt to subvert events organised by Jewish Community organisations. They tried to sabotage the Cast Lead Rally and ended up with egg all over their faces.

It is impossible to overstate the adverse implications of a Cohen win. The UJS President gets to choose his/her team. They would all be anti-Zionists. Instead of opposing Israel Apartheid Week in February, UJS would support it! UJS would be at loggerheads with its funders (UJIA and CST) and with the vast majority of the Jewish Community and of Jewish students. It could quite possibly disband and reform under another name and with a new Constitution – but not without endless wrangling – which would leave the Israel haters on campus with an open goal.

Fortunately the election is by Alternative Vote (AV). So unless Cohen gets more than 50% of the votes in the first round, there is no danger of the ‘sensible’ vote being split between Holt and Schapira, letting Cohen in.  But 2016 has been the year of unexpected election results – and they say that bad things come in threes … The voting rules are set out in the UJS Constitution. Note in particular (3.4.4) that Jewish students do not have to be a J Soc member to vote. They simply have to ‘self-identify’ as Jewish.  UJS claims to have a rigorous system to stop ‘false flag’ anti-Israel Cohen supporters from registering as supposed ‘self-identifiers’.

Electing Eran Cohen UJS President would be like electing Jenny Tonge as Chair of the Zionist Federation – in other words, completely inappropriate.